Cool things happen when you control water with a computer. 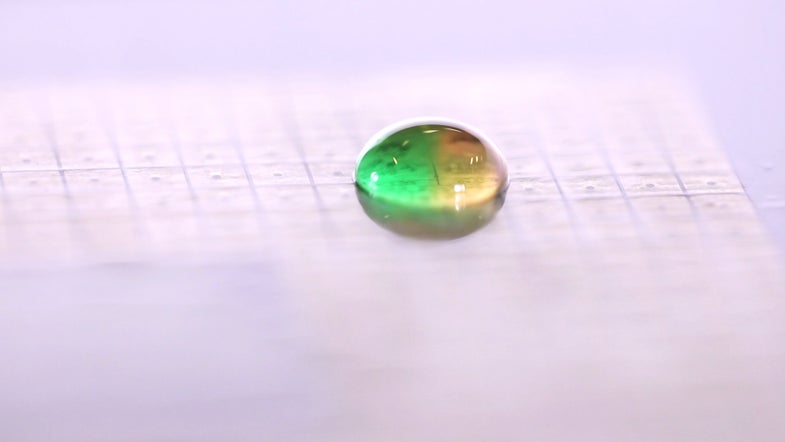 Imagine drops of water sprinkled onto a pan’s Teflon surface. Those droplets will stay in place, or move around if you tilt the pan from side to side, thanks to gravity. But researchers at the Massachusetts Institute of Technology’s Media Lab have created a system by which droplets on a device follow a computer’s instructions and move in a controlled way across the horizontal surface, like pieces on a board game.

The project was born out of a desire to “computationally reconfigure physical matter,” says the project’s lead, Udayan Umapathi, a research scientist at the MIT Media Lab. In other words, take a substance—in this case, water— and manipulate the way it moves with a computer.

The result is a computer-controlled system that does just that: allows users to direct a water droplet across a board as they like, and even combine it with other droplets. It works using a 19th-century technique called “electrowetting.” The device itself is based on a circuit board, and its surface consists of hundreds of gold-plated copper pads, connected by wiring underneath. Upon those pads is a five-micron-thick sheet of smooth plastic that’s covered with Teflon on top to keep the surface hydrophobic, meaning that the water is repelled from the surface and thus doesn’t spread out in a messy pool.

Sending a tiny electrical current to one of the many pads on the board creates a positive charge that lures the water droplet towards it. By charging the pads in a specific order, a water droplet can be pulled along whatever path the person controlling the computer wants. Think of it like putting a magnet beneath a board game to control a metal piece above, except in this case they are using a custom-made app on the connected computer to dictate the water’s behavior.

So what’s the point? Basically, Umapathi says that it is interesting to take a common yet fascinating substance like water and use it in this way. “[Water] has all these beautiful properties,” he says, “but it’s not being put to use for a computer interface.” He also sees a potential application for the technology in biology, taking the place of a human who might use a pipette to carefully move or mix water droplets during experiments.

Using technology to more closely join the physical world with the digital one, or vary the way we input information to a device—beyond simply typing on a computer keyboard, iPhone screen, or speaking to a virtual assistant like Alexa—can produce fascinating results. MIT Media lab also revealed technology that can detect the words you speak silently to yourself, and Google and Levi’s have teamed up to produce a jacket in which you touch its sleeve to input instructions that it parlays to your phone via Bluetooth.

In this case, part of the idea is that the technology creates a peaceful, calming effect with a substance from nature. “We want to move away from from the idea of just looking at pixels which are stuck behind glass,” he says. “We want people to be connected to the natural, and the most beautiful material, that we have on the planet.”

“This is a way to actually program reality,” he says. “That’s one way to think about it.”