These 59-pound boxes contain lots of glass and a ton of tech. 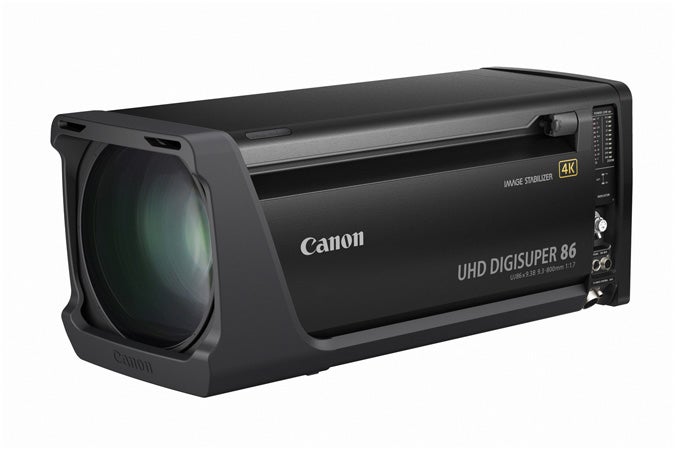 Look around the sidelines of any Olympic event and you’ll see rows of photographers with enormous zoom lenses— gear that can easily climb above the $10,000 mark. They’re the stuff photographers dream about, but that equipment can seem relatively puny when compared to the massive broadcast lenses broadcasters are using to capture its insane amounts of Olympic coverage. In fact, the lenses attached to those TV cameras can push price tags to $200,000 and beyond. That’s a lot of sweet glass.

Canon has more than 70 broadcast box lenses on site in PyeongChang, including some of the flagship UHD DIGISUPER 86, which you can buy right now for $222,980 on the open market. It weighs 59.5 pounds, and is 10 inches wide and tall and 24 inches long. To look at it, you could mistake it for a really fancy toaster oven with glass on one end. But you won’t find any bagel bites inside—it’s full of carefully shaped pieces of glass.

“Some of our high-end broadcast lenses have 30-40 elements inside,” says Larry Thorpe, a senior fellow with Canon’s imaging technology and communications group. For comparison, a typical lens like the kit zoom that come bundled with DSLRs have around 10 elements inside.

Light starts behaving oddly when you refract it. The prism effect, for instance, which allows you to split a beam of white light into a colorful rainbow, happens because different wavelengths of light refract at different angles. In the camera world, this can result in an effect called chromatic aberration, in which the edges of an object appears with a bright green or purple halo. To combat this effect, Canon uses special materials like fluorite, which has a lower refractive index than typical glass and helps keep light from splitting up along its trip.

Lens elements are typically ground down from rough glass blanks, and then polished—sometimes by hand—to get rid of imperfections. “We spend a lot more time polishing 4K lenses because imperfections that measure just a nanometer can affect performance,” says Thorpe.

Fluorine is a naturally-occurring element but grows in tiny crystals, so Canon produces its own fluorine in large quantities. The company has been using the material since 1969. 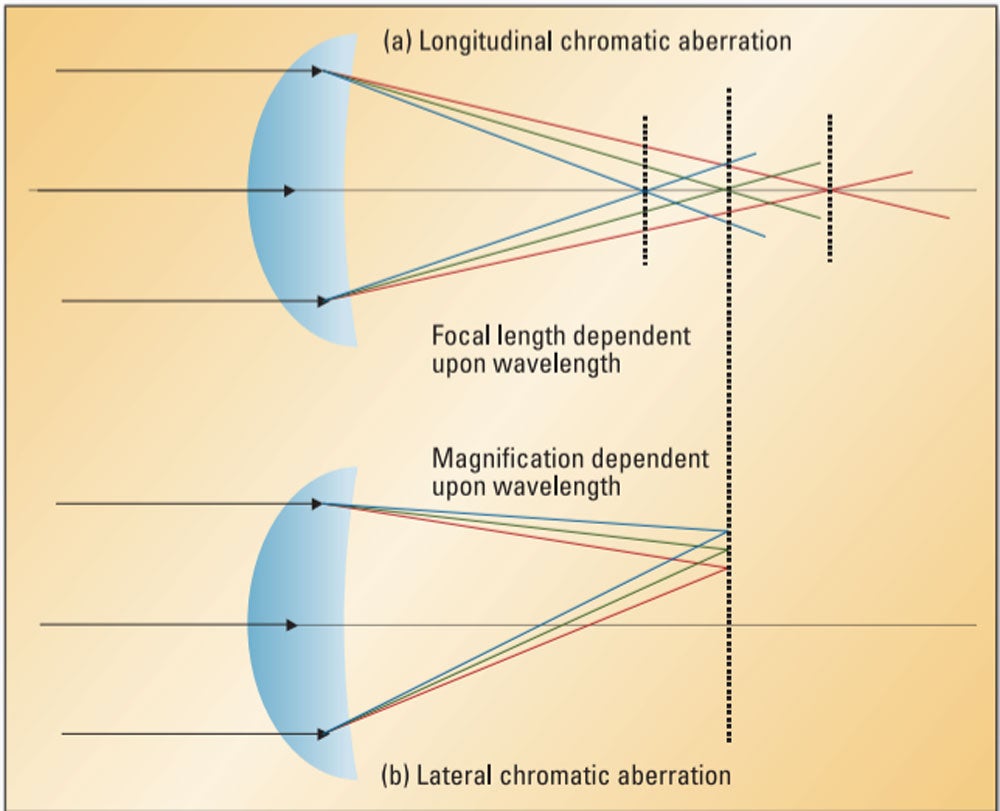 Different colors of light refract differently, which can cause ugly halos in images. Lenses need to correct for it.

The shape of each element also comes into play. When we think of a lens, we typically envision a piece of glass that follows a smooth curve, like a big contact lens. However, lenses of that shape can’t make parallel lines converge at the same point. Slightly changing the shape of the lens, however, helps eliminate the distortion typically associated with wide-angle lenses, and prevents spherical aberration, which causes objects in the center of the frame to achieve sharp focus, but objects at the edges of an image to appear soft.

In addition to the quality of the light the lens lets in, through, Canon also has to worry about the amount of light getting in. Box lenses typically have very large apertures, which let in lots of light at the same time, an essential feature for focusing and also shooting in a variety of lighting conditions. The size of a lens’s aperture is expressed as its f-number—the smaller the number, the bigger the aperture (relative to the lens itself). A box lens like the UHD DIGISUPER 86 has a maximum aperture off f/1.7 at its wide-angle setting, which lets in more light than any consumer-grade zoom lens on the market—even the high-end DSLR lenses. “Large apertures are a big part of why these lenses are so large,” says Thorpe. “You need a huge front element when you’re letting in that much light.”

Another thing that pushes the size—and the price tag—of these optical monsters is zoom range. A typical high-end zoom lens for a DSLR can reach 3x or maybe 4x optical zoom. The UHD DIGISUPER 86 has, as its name suggests, an 86x zoom range. If you’re familiar with focal lengths, it goes from 9.3 – 800mm. The lens also has a built-in extender that doubles the effective focal length from roughly 18mm all the way up to 1600mm, which could easily zoom in on the face of an athlete on the other side of a stadium.

Broadcast cameras use a sensor that’s classified as 2/3-inch, and measures 11mm on the diagonal. By comparison, a high-end DSLR lens with a full-frame sensor (like the ones used on the sidelines) have a diagonal measurement of roughly 42mm. As a result, broadcast cameras need to cram a lot of pixels in a very small area just to get HD quality. The move to 4K is making things even more demanding.

“In an HDTV world, every millimeter of that image format has to contain 100 black-and-white lines that you can see with decent contrast,” says Thorpe. Pushing to 4K multiplies that requirement, which requires absurd levels of precision when it comes to the optics.

Before all the polishing, however, Canon uses computer simulations to estimate the ideal build and organization of elements before a grinder ever touches the glass. “A computer considers hundreds of millions of options before we ever build a prototype for a new lens,” says Thorpe. “The computers simulate for months to analyze dimensions and shapes.”

Canon uses this pattern of lights to test the optical performance of a lens. Left: “Light input to a lens element, consisting of an array of infinitely small point light sources that will stimulate the lens focusing aberrations” Right: “Progressive center-to-edge defocusing associated with curvature of field.”

In addition to the glass, there’s also a lot going on in terms of electronics. The lens controls sit on either side of the body. The operator keeps both hands on the lens on each side, typically operating the zoom with the right hand and the focus with the left.

A director, who is usually in a remote location like a control room or a broadcast trailer, instructs the camera operator on how to cover the scene. And, because the lens is controlled electronically, the director can actually adjust the iris of the lens from afar, which allows the operator to concentrate on his often fast-moving subject.

The glass elements need to move in closer sync than a pair of couples figures skaters. Electronic servo motors push groups of elements in various directions as the operator adjusts the focus and the zoom. Lenses with Image Stabilization also require elements to bob around inside the lens barrel in order to combat the natural motions of the massive lens. This is especially crucial at the telephoto end of the zoom, at which even tiny movements can cause enough camera jiggle to make a viewer nauseated.

“The camera operators are extremely skilled,” says Thorpe. “I wouldn’t want to be responsible for tracking a snowboarder flying around on a halfpipe while the world was watching.”