The inventor believed unmanned machines would end all wars 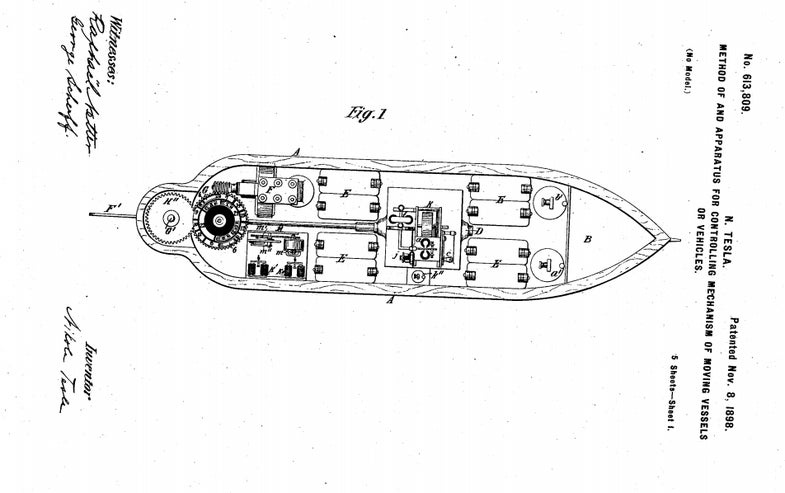 Nikola Tesla, the inventor, electric car company namesake, and beloved darling of the internet, had a great many visions in his mind. Among the more obscure: a patent for killer robots. And not just killer robots, but killer robots he thought were so deadly that the mere risk of their use would bring about peace.

As spotted by technologist Matthew Schroyer:

The patent, for “Method of and apparatus for controlling mechanism of moving vessels or vehicles,” was granted November 8th, 1898. For a device like this to work, it needed to be wireless, and Tesla envisioned it powered by electrical waves. From the patent:

Radio waves, while not mentioned by name, were discovered in the 19th century, and would go on to shape the entire world of unmanned machines. Tesla was right about what it would take to steer his robots, though wrong on their destructive potential.

The first drone built for war, or at least one of the closest predecessors, was the Kettering Bug. Instead of using remote control, it was pre-programmed to fly a certain distance (it is also the ancestor of modern cruise missiles). Built for World War I, the bug was completed too late to see action, which is just as well, since in tests it was unreliable at best.

It would take another century for armed, remotely controlled machines to come into their own, and while much has been written about how drones will change war, it’s a much older, much more destructive technology that scared superpowers out of fighting each other: the atomic bomb, a grim child of Oppenheimer, not Tesla.