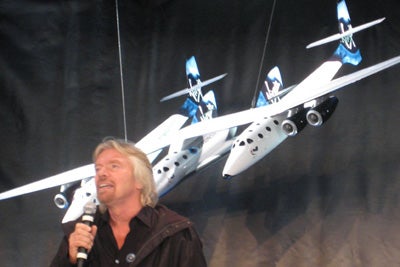 For someone who follows far-out entrepreneurial space ventures for a living, it’s good to soak up some skepticism once in a while. And a heavy dose of skepticism about private-industry space tourism is just what I what I got this morning at the annual American Association for the Advancement of Science meeting in Boston, during a symposium titled “50 Years of the Space Age: Looking Back, Looking Forward.” Looking forward, this group of experts—including Kathy Sullivan of the Battelle Center for Math and Space Policy, Roald Sagdeev of the University of Maryland-College Park, and Alvin Aldrin, son of Buzz Aldrin—sees hard times ahead for space tourism entrepreneurs.

It’s simple economics: Sure, Virgin Galactic could be up and running in the coming years, and they might even turn a profit. But the number of passengers willing to pay for a suborbital flight—a quick taste of space that Kathy Sullivan bluntly calls a “lark”—is probably not large enough to support growth in the space tourism industry, Aldrin and Sullivan agreed. As Aldrin put it, “We know nothing about this market.” And without growth, spacecraft remain incredibly expensive to build, spaceflight doesn’t get cheaper, and large, publicly owned companies—the ones with the real money—are unlikely to get involved. (An interesting little tangent on the economics of scale in the aerospace industry: According to a chart presented by Aldrin, the Air Force’s controversial F-22 Raptor is only a little less expensive per pound than Space Shuttle Endeavor).

But back to space tourism: What’s more, Sullivan said, today’s space entrepreneurs are still using technology that hasn’t changed fundamentally since the days of Wernher Von Braun. In other words, nothing happening in Mojave or Las Cruces is likely to create the kind of game-changing technology that would make space travel truly, revolutionarily cheap. Was the panel made up of a bunch of haters? Hardly: Aldrin said he’d love to go down in history as one of the people who back in the day said, wrongly, that there was no market for space tourism. But unfortunately the view from Boston, Earth, 2008, is sobering.