Big Men on Their Tiny Tractors

Further proof that man (and woman) will race pretty much anything that moves: Our editor finds out how it feels to mow like hell in Texas. 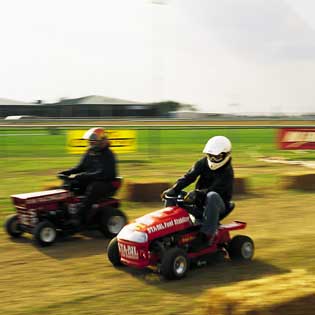 CUT TO THE CHASE
The author passes another racer during practice.

Floodlights stretch my shadow across the dirt track as I approach the starting line. Six racers are already there, each one facing his machine, poised for a Le Mans-like start. We exchange anxious looks behind full-face helmets. Then the call to race: “Ready, set . . . mow!” We run 15 feet to our mowers, throw them into gear, and take off.

I’m at the Sam Houston Race Park in Texas for the season opener of the 2002 Sta-Bil Lawn Mower Racing Series. Forty-five racers from as far away as Wisconsin have gathered for the event, and 5,000 spectators who came for thoroughbred action look on with incredulity as we sprint around the infield between horse races.

Of the more than 600 members of the U.S. Lawn Mower Racing Association (USLMRA), 350 crisscross the country each year to compete in 22 races. Some describe their hobby as

a blend of Nascar and the Grateful Dead. But with puns thick like lawn trimmings on the ground-Mr. Mowjangles and the Lawn Ranger will show up at your typical “mowdeo”-

The flag went down on the first official USLMRA race on April Fool’s Day, 1992, but the sport was actually kicked off in 1973 by a group of British lads looking for a cheap thrill. “This is the most inexpensive motorsport,” affirms Charles Powell, aka Mr. Mowjangles, my mentor and one-man pit crew.

By rebuilding retired mowers, participants construct race-ready machines for as little as $200. They compete in one of four classes: stock (10 mph), imow (20 mph), prepared (50 mph), and factory experimental (60 mph). Powell built my prepared mower, which began as a model-year 1975 MTD (top speed 8 mph), for slightly more than $1,000. In the span of a month, he installed new axles and a direct steering system to enhance handling; removed the governor and increased the gear ratio for more speed; installed aluminum wheels to reduce weight; added go-kart brakes for stopping at high speed; installed a kill switch to shut down the mower in an emergency; and gave it a slammin’ paint job just for looks. On

the starting line the machine elicits admiring glances. In the heat of battle, it

propels me, a novice racer, past much of the competition.

There is no money to be won here. “We race for trophies and bragging rights,” says Mowron, real name Tim Robison. But even the trophies often come at a price. During practice I take a hay bath-the term for crashing into hay bales that line the track. The helmet and protective clothing limit the damage to little more than two grapefruit-size welts. The threat of more serious accidents, however, has led the Outdoor Power Equipment Institute to speak out against a sport that, you would think, brings a certain cache to a rather pokey locomotion. “Lawn mowers were manufactured to cut grass,” says OPEI President Bill Harley in an official statement on its Web site. “They are not racecars.”

Maybe not, but they’re damn close. I lead the pack through the first half of the 10-lap race, hunching over my steering wheel as I skid on two wheels through each turn. I drop back two positions during lap six, but hang on to cross the finish line in third. Powell runs out to give me a high five. “Watch out or you’ll get hooked,” he jokes. Too late: This baby won me over on the first lap.