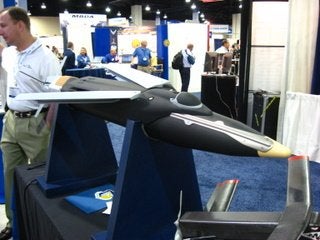 Dr. Strangelove‘s Major ‘King’ Kong might have trouble riding this sleek bomb down to the ground, but that’s the entire point of a munition meant to reduce collateral damage.

The Focused Lethality Munition, on display at the Air Force Association show, puts the emphasis on precision, with a GPS-guided inertial guidance system that supposedly has hardening against possible jamming.

A carbon fiber composite warhead similarly breaks up into small fibers upon impact, and avoids creating steel fragments that might cause widespread death and injury. The 206-pound blast from the bomb also stands in stark contrast to the Pentagon’s upcoming bunker buster, which packs 5,300 pounds of explosives.

The bomb’s drone-like appearance comes from deployable wings that allow it to home in on its target from a distance. Aerospace manufacturer Boeing notes that Air Force planes ranging from the F-22 Raptor to B-1 and B-2 bombers can carry the bomb, and suggests that even drones could deploy the weapon.

That sounds all well and good, as long as human handlers can keep a hold on their armed robotic charges.