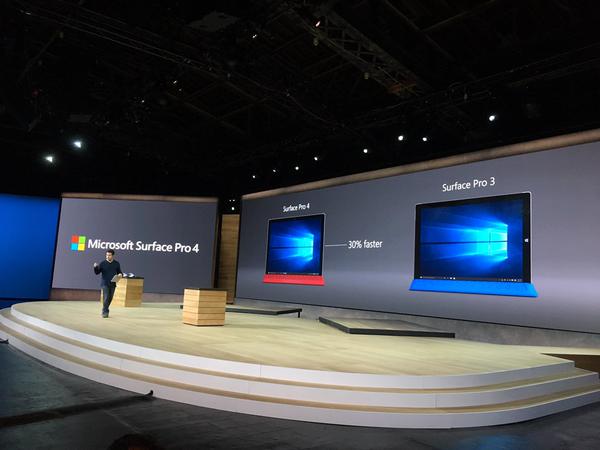 The update to Microsoft’s Surface line comes at an important time, with Apple and Google also recently announcing similar products in the category. Microsoft has been playing in this field (maybe struggling is the better word) since 2012, but in 2015, the concept has seen a surge of new interest, according to the company.

“The momentum we see with Surface Pro 3 is off the charts,” says Panos Panay, Surface VP for Microsoft.

In a direct counter to Apple’s own iPad Pro and Apple Pencil, Microsoft also unveiled a new Surface Pen, with 1024 levels of sensitivity, and the ability to use the tail as eraser. The Pen also touts “all-year” battery life, and will feature interchangeable pen tips.

“It’s like a ballpoint pen to a felt-tip pen, to even a pencil,” Panay said.

To connect more peripherals, the Surface Pro 4 can also connect with the new docking station, that houses 4 USB 3.0 ports and an ethernet port, and can power two 4k DisplayPort connections.

The device ships on October 26 and is available for pre-order now in the Microsoft Store.