As Seen On TV: Science Gets Your Whites Their Whitest

In the first installment of As Seen On TV, we look at what that bearded guy has been yelling about and why his excitement might be valid 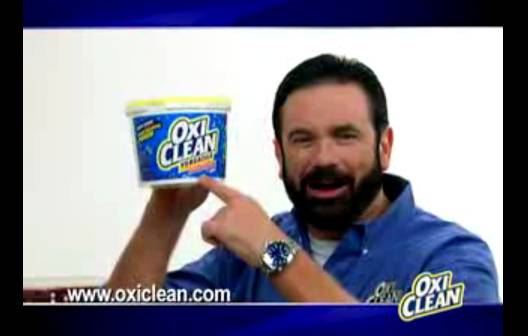 Watching trashy TV late at night hardly provokes most people to think about laundry. Billy Mays seems to think that screaming about detergent will change that. But just what is that enthusiastic-to-the-point-of-belligerent pitchman yelling about? That would be OxiClean. On the commercial, Mays shouts that it uses the power of oxygen to miraculously clean. But does it actually work? The answer is sometimes, and knowing how it works explains why

OxiClean is designed to be used with regular detergent, helping to pick up some of the chemical cleaning slack. The product is a powder of sodium percarbonate, the chemical mixture of sodium carbonate, a component of glass, and hydrogen peroxide, the common disinfectant. When OxiClean is added to water, the chemical breaks up into those two constituent parts. As it turns out, there are three kinds of stains, and the two parts of OxiClean attack two different kinds of stains.

For the first group of stains, OxiClean doesn’t really make detergent any better than it already is. Regular detergent is designed to work against oils, so it can bust up those stains without much help.

“Generally, your detergents do most of the work,” said Jeffrey H. Harwell, a professor and cleaning product expert at Oklahoma University.

However, regular detergent isn’t very good at cleaning up those other two classes of stains. That’s where OxiClean pitches in.

The sodium carbonate component of OxiClean breaks up that magnetic attraction. Sodium carbonate raises the pH in the cleaning water, causing a chemical reaction that turns the positively charged stain negative. Once negatively charged, the dirt flies off of the fabric.

For the wine and coffee type stains, OxiClean earns its name. Oxygen is an atomic buzzsaw, slicing through chemical bonds left and right. Rust? That’s oxygen. Wrinkles? Oxygen again. When the hydrogen peroxide component of OxiClean hits the water, it further breaks down into water and a free oxygen atom that’s just looking to raise some hell.

Coffee, wine and other similar chemicals get their color from the geometry of their chemical structure. Even a slight change in that structure causes the chemicals to lose their color, and that’s where that lone oxygen atom comes in. The oxygen starts slicing and dicing those chemicals, chopping up some of them and sticking others together. It destroys that color-causing geometry, leaving the chemicals completely transparent. So while the material that caused the stain remains on the fabric, the stain has become invisible.

“You just get rid of the color by breaking the bonds, so you don’t care if the material is still on the fabric, because there’s no more color,” said Harwell.

However, OxiClean isn’t the only product with these properties. Hydrogen peroxide can be bought by itself, and bleach works the same way. For the pH raise, many companies, including Arm and Hammer, which is owned by the same company that makes OxiClean, manufacture a product called washing soda or soda ash, which is just sodium carbonate by itself. But of course, there’s no one on TV yelling at you to buy those products.