The rover shut down science activities a few days ago. 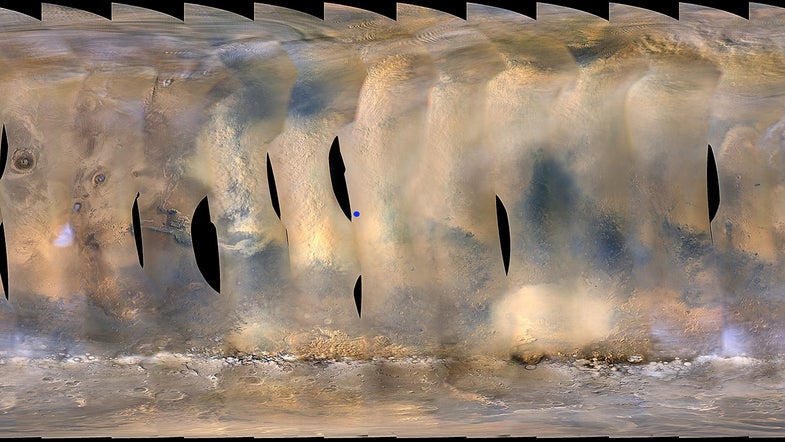 This image shows a dust storm on Mars growing on June 6, 2018. The blue dot is the approximate location of Opportunity. NASA/JPL-Caltech/MSSS
SHARE

The storm appeared on June 1—a haze of dust kicked up by winds blowing across the surface of Mars, visible in images sent back by the Mars Reconnaissance Orbiter. That’s not that unusual. Large dust storms happen on the planet every year, often lasting for weeks. But this storm was headed right for Opportunity, a determined solar powered rover that’s been roaming around the surface for almost 15 years.

By June 6, the dust hung thick enough in the sky to draw a veil across the Sun, dimming the light enough to significantly decrease the output of Opportunity’s solar panels.

Back on Earth, NASA researchers shut down the robot’s science operations—the focus now wasn’t gathering data, but keeping Opportunity alive. The rover converts sunlight into power, which recharges its battery and powers all its systems, including its heaters, which keep it functional when temperatures dip below zero. But less sunlight means less power and less heat to go around, straining the rover’s systems. Keeping Opportunity warm is vitally important—NASA researchers think it was cold temperatures that killed Opportunity’s companion rover, Spirit back in 2010, after it got stuck in soft sands on the other side of the planet.

Two days later, the storm resembled thick and heavy smog, covering an area of 7 million square miles. At that point, the storm was still much smaller than a 2007 dust storm that knocked Opportunity out of commission for two weeks. Still, this qualified as the worst storm the rover had encountered in a decade, and engineers on earth came up with a plan to let Opportunity preserve its dwindling power supply. It would wake up briefly in the morning on a Martian day to listen for commands from Earth, sleeps until the next morning, wakes up in the morning, naps until the afternoon, wakes up, takes pictures of the surrounding haze and transmits up to the MRO, then back to sleep. Repeat.

June 10 brought both good news and bad. The good news was that Opportunity managed to make contact with Earth, giving NASA scientists a much-needed status update. The bad news was that while the dust storm was still smaller than the 2007 event that circled the planet, it was much more intense. Temperatures were now -20 degrees Fahrenheit, and the dust was so thick that the skies were dark.

NASA’s statement on Opportunity’s situation was cautiously optimistic, noting that it had survived years past its original 90 day mission, and pointing out the delicate balance that the rover was about to endure: “One saving grace of dust storms is that they can actually limit the extreme temperature swings experienced on the Martian surface. The same swirling dust that blocks out sunlight also absorbs heat, raising the ambient temperature surrounding Opportunity. Engineers will monitor the rover’s power levels closely in the week to come. The rover needs to balance low levels of charge in its battery with sub-freezing temperatures. Its heaters are vitally important to keeping it alive, but also draw more power from the battery. Likewise, performing certain actions draws on battery power, but can actually expel energy and raise the rover’s temperature.”

1,410 miles away in Gale Crater, the rover Curiosity is chugging along, but dust from the storm dimming the light over Opportunity obscures the skies there, too.

Opportunity isn't the only Mars rover experiencing dusty skies right now. Dust is starting to accumulate in the skies over Gale Crater, and the change in sky clarity over the last 8 sols has been dramatic. Fortunately, Curiosity doesn't rely on solar power to run! pic.twitter.com/614bplrmbJ

Luckily, Curiosity is better equipped to handle the haze. Unlike the solar-powered Opportunity, Curiosity has a nuclear generator which keeps it running dust or shine.

Despite the distance between the two rovers, Curiosity will help keep tabs on the developing storm. Mission scientists will keep an eye on how much the sky dims above Gale crater, monitor wind speed and direction, and watch for dust devils.

Researchers still have a lot to learn about dust storms on Mars. A recent study linked global dust storms to gas loss from the martian atmosphere, but more observations are needed to understand how the process works. If it ends up being large enough, this storm could give planetary scientists valuable information into these atmospheric processes. It could also help researchers refine their forecasting models, which they use to predict the onset of global dust storms.

The current dust storm season on Mars is expected to last into early 2019.