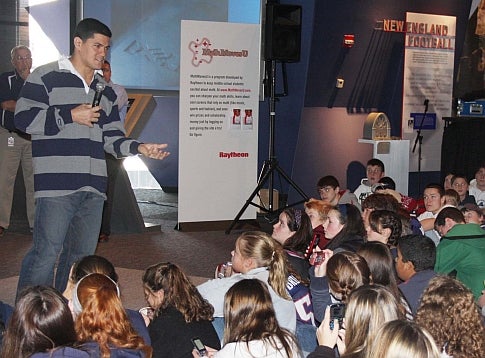 The Boston sports fan has been spoiled rotten over the past decade. Now middle school students in Beantown are receiving similar treatment with a unique program that uses sports to teach science at Gillette Stadium, home of the New England Patriots.

The Hall at Patriot Place is a museum for all things Patriots. From Brady to Belichick, adoring fans both young and old can relive their recent and past success with a technically impressive display. In addition to helping to fund the Hall, Raytheon has teamed up with the Patriots to start the youth outreach program “Science of Sports,” aimed at mentoring kids in the greater Boston area Boys and Girls Clubs.

At the heart of the outreach are visits being made by Raytheon employees to help inspire a sports-science fair with entries from the local area. The fair will be held at the hallowed grounds of Gillette, with winning teams receiving $1,000 scholarships.

“Raytheon is committed to instilling in students a lifelong passion for math, science, and technology, and our proud support of the ‘Science of Sports’ program is just one of the myriad ways in which we are doing this,” said Kristin Hilf, vice president of public affairs for Raytheon. “It is critical to engage young minds now, during their formative years, to build within them the skills that will help them achieve greater success in school, their careers, and throughout their lives.”

The hall itself has a series of high-tech exhibits worthy of their own recognition. A 45-foot panoramic projection screen plays an opening video while a geodesic dome houses an exhibit about the infamous snow game. Fans can also compare their vertical jump to that of their favorite player, go under the hood to review plays like an NFL official, and listen to their hero Tom Brady call plays from the huddle. Now if only one of those students can come up with a fix for that darn ACL.