The company you keep can keep you in good spirits, says a new study 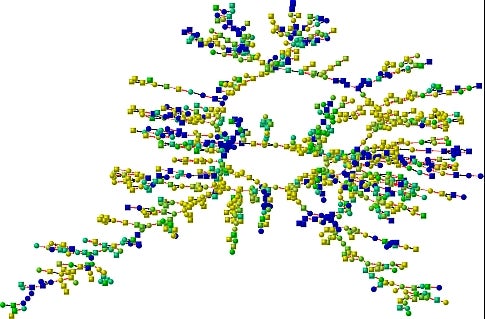 A smile is infectious, as the saying goes, and now scientists have proven it. In spades. A study published today in British Medical Journal shows that happiness acts like a blessed disease: it can spread from person to person through social channels. On average, the study finds, every happy friend increases your own chance of being happy by 9 percent.

James Fowler of UC–San Diego and Nicholas Christakis of Harvard Medical School were curious how emotions and other health factors might ripple through social networks, a burgeoning field of research. So they mapped the well-being of a group of nearly 5,000 interconnected people, whether it be as blood relations, friends, neighbors, or coworkers. They pulled 20 years of the happiness data from the Framingham Heart Study, which has been tracking health stats on a group of Framingham, Massachusetts residents and two generations of offspring since 1948.

Scientifically, what defines such a subjective emotion as this? For the study participants, it was whether they checked “yes” on these four survey questions: “I felt hopeful about the future”; “I was happy”; “I enjoyed life”; and “I felt that I was just as good as other people.”

The researchers found that, like the flu, happiness thrives in close quarters. A happy friend who lives less than half a mile away is 20 percent more influential than one two miles away. But surprisingly, you don’t need direct contact to catch this disease—it can actually sprawl over three degrees of separation. That means that the happiness level of even your friend’s friend’s friend can influence your own.

The authors hold that their conclusions aren’t an artifact of the tendency of people to cluster with similar folks. If at a party, for example, the brooding person in the corner cheers up during a good conversation, it’s not that he suddenly joins the in-crowd laughing loudly in the center of the room. Even staying where he is, his actions have a ripple effect. “Changes in individual happiness can ripple through social networks and generate large scale structure in the network, giving rise to clusters of happy and unhappy individuals,” say Fowler and Christakis.

So, on the flip side, does misery indeed love company? Thankfully, not as much as happiness. Unhappiness spreads less in social networks—probably because it’s such a solitary pursuit.