How to green screen your friends’ St. Patrick’s Day garb

It's their own fault for wearing green on the internet 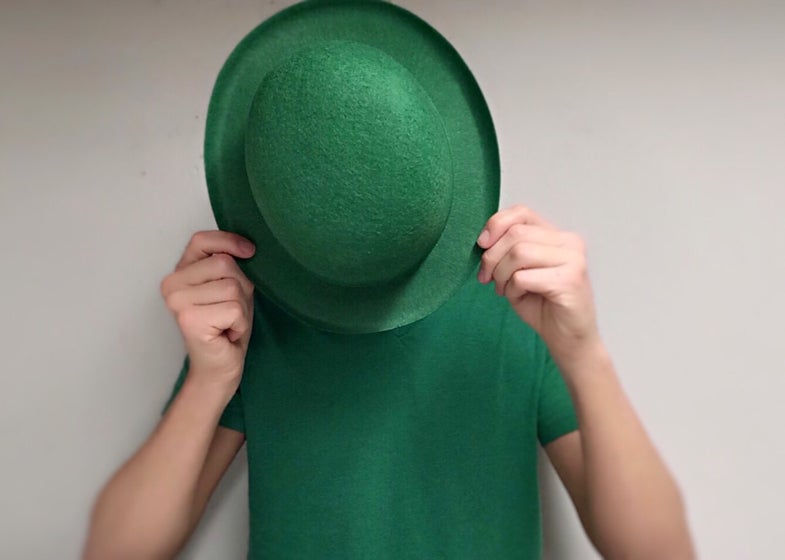 When you're a video editor, sometimes you have to have some fun with your friends. Pixabay
SHARE

Your social media feeds were probably flooded with photos and clips of people wearing green this weekend. And since your friends have very willingly supplied you with all this footage, why not practice your green screen skills?

For those unfamiliar, a green screen (or blue screen, or really any color screen that doesn’t match a person’s skin tone or clothing) is a tool used in film and television production that allows editors to erase and replace the color of said screen. This is accomplished through a tool called a “chroma key.” Essentially, setting a chroma key tells the computer to ignore a certain color in a picture or video. Once that color is gone, a new image or video can be placed underneath the original, filling the now-transparent area.

Here’s an example of how a green screen and chroma keying look on-air from “Whose Line Is It Anyway?”:

Chroma keying can also be used strategically to eliminate parts of bodies or entire people, which is why you may see people wearing polyester/spandex suits that are all one color—better known as “chroma key suits” or “morph suits”—in behind-the-scenes clips of your favorite movies and TV shows.

But every now and then, you’ll see someone accidentally wear the same color as the screen that’s being taken out. And when that happens, it’s usually pretty funny.

Now it’s not necessary to have a screen in the background to chroma key—you can do it on any video as long as you select a color in the frame.

and Buzzfeed’s Jesse McLaren took advantage of that:

What happens when u wear a green tie on TV ? pic.twitter.com/gAohulqeck

Here’s how you can replicate this effect for Spicer, or any footage you come across where someone is wearing green.

Here’s how to green screen

I recommend doing your chroma keying in After Effects, and that’s the process I’m explaining. However, it can also be done in Premiere Pro, Final Cut Pro X, Avid Media Composer, or even Photoshop. 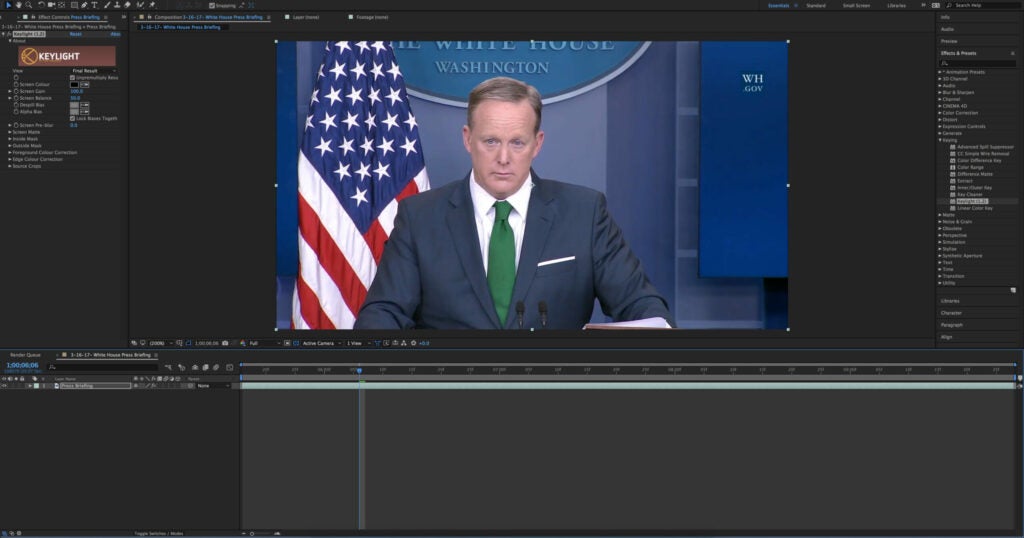 To start, import your footage into After Effects and create a new composition. Once you’ve done that, head into the effects menu at the top of the screen and select “Keying,” followed by “Keylight (1.2).” Click the eyedropper next to “Screen Colour” and click on Spicer’s tie. You can push the edges a little by increasing the screen gain and decreasing the screen balance. You won’t get the entirety of the tie yet, and that’s ok. 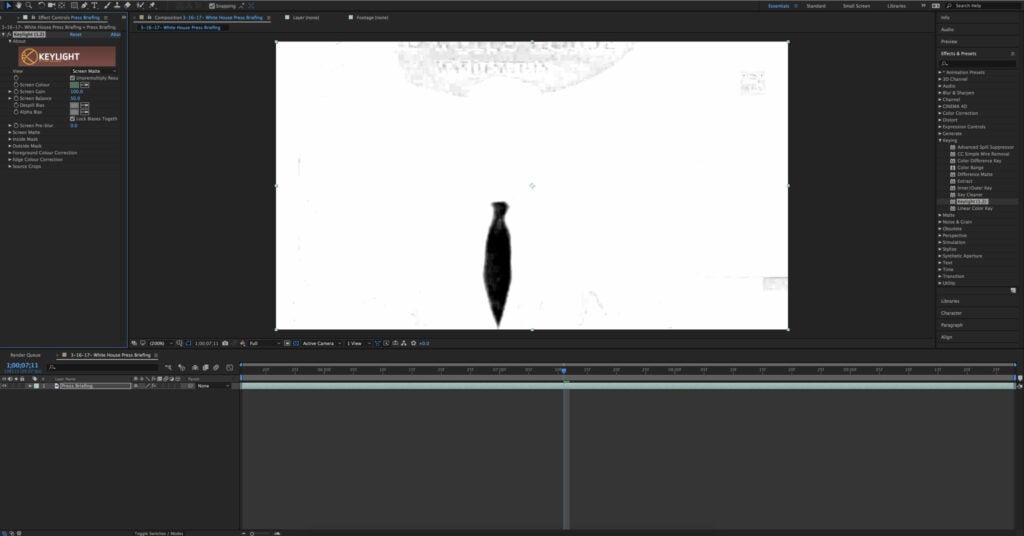 To see what you’re eliminating, click the “View” dropdown menu and change it from “Source” to “Screen Matte.” You’ll notice noise both in the tie and in the background. 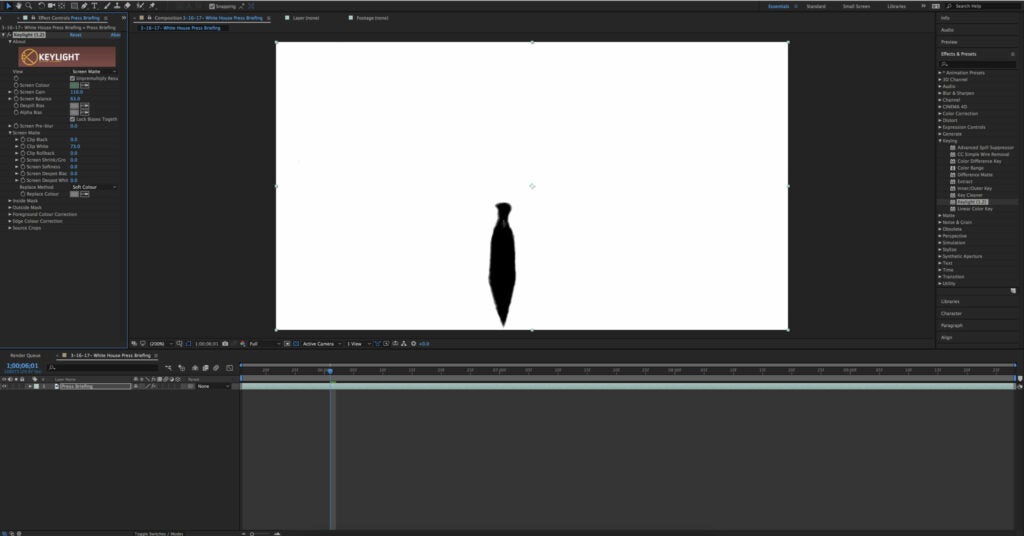 Open up the “Screen Matte” properties menu and pull/push your “Clip Black” and “Clip White” options until that noise disappears—what we’re looking for is as pure of a black and white as possible. Then change from “Screen Matte” view to “Final Result.” 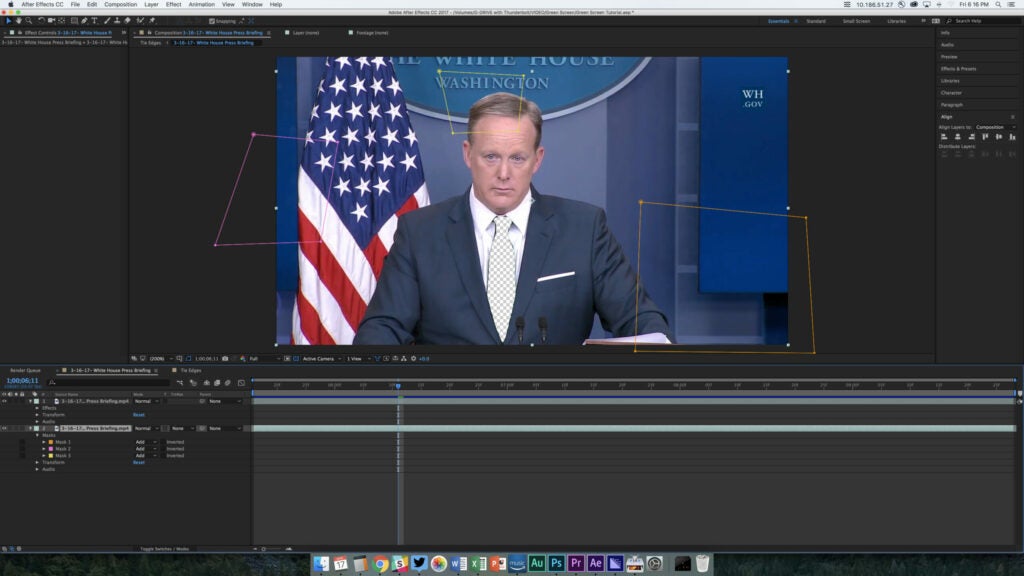 Most of the tie (or whatever green clothing you’re manipulating) should now be gone, but it probably has a dark and/or rough edge. There may also be some white or black spots that are now transparent in your video. To fix the latter, duplicate the video and use the pen tool to draw masks around all of your problem areas on the bottom layer. Then delete the Keylight tool and you should be set. 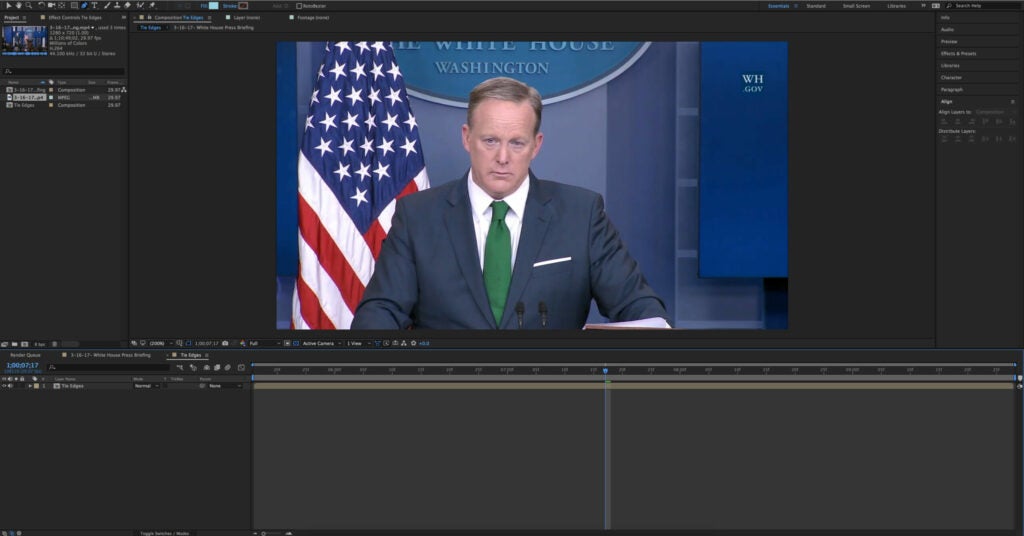 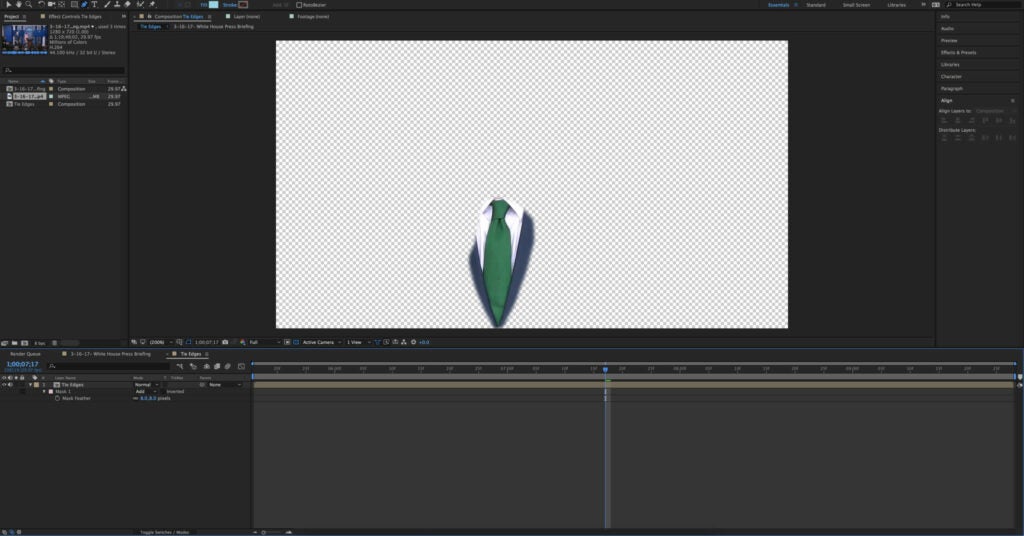 Draw a mask around Spicer’s tie (don’t worry about making it too accurate). The final step for your mask is to hit the ‘F’ key on your keyboard and apply a small feather to your mask. This is going to help keep our tie edges looking normal in the final product. 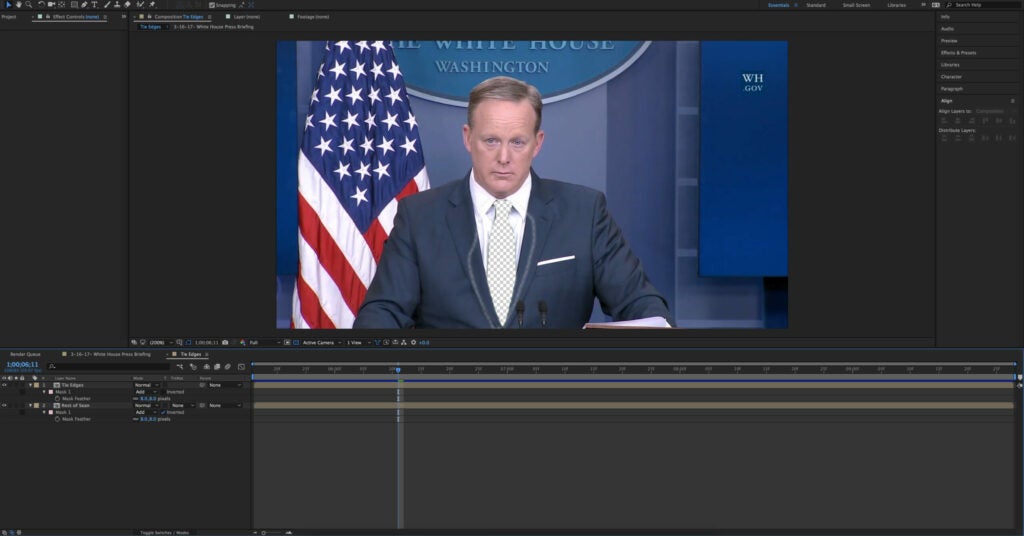 We need to make sure we also keep the rest of Spicer in the video, so duplicate Tie Edges and click the solo button (the third check box next to your layer—it has a small circle icon above it at the top). Invert your mask with the “Inverted” check box. This should give you the exact opposite of the previous layer—a transparent area where the tie once was. Rename this layer “Rest of Sean.” Place Rest of Sean underneath “Tie Edges” and unclick the solo button. 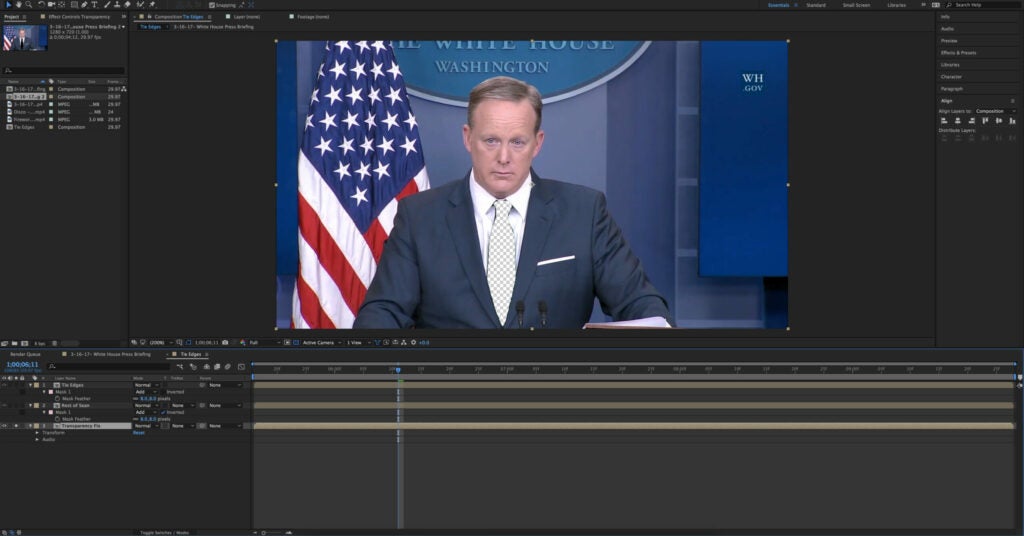 We’ve got a new problem now—there’s a transparent circle where our mask lies because of the overlapping feather in both of our layers. To fix this, create a duplicate of “Rest of Sean” and place it below both of your existing layers. Delete your mask only in that layer. Now everything should look normal. Call this final layer “Transparency Fix.” Apply the “Keylight (1.2)” effect to all three of your layers, using the same settings as your original composition. An easy way to do this is to go to your original composition and copy the Keylight you previously used. Then simply paste it into the layers of your new composition. Once you’ve done that, solo Transparency Fix. 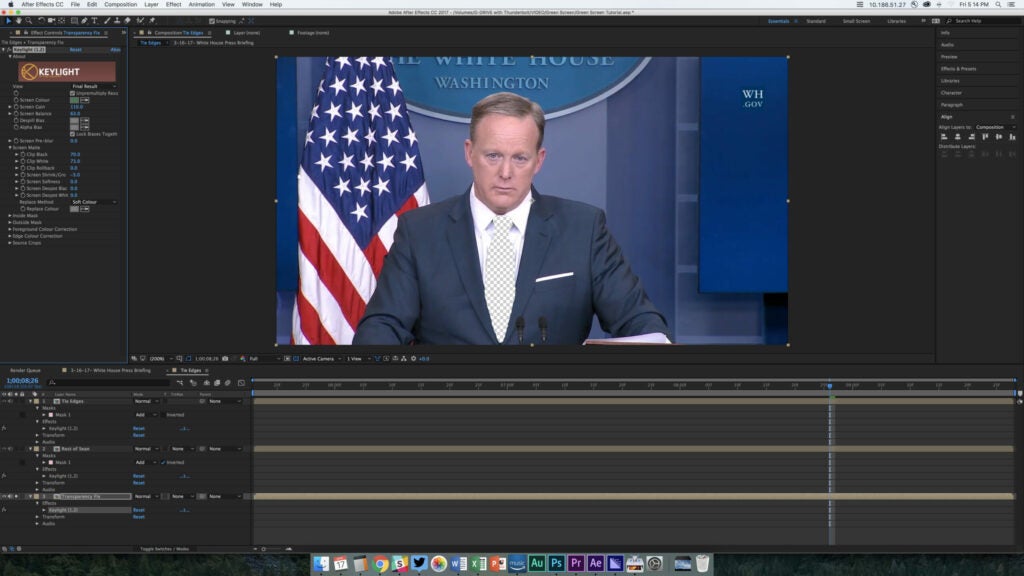 If you look at the Keylight settings for this layer, you’ll notice a property called “Screen Shrink/Grow.” Pull that back a little bit (I pulled it to -3.0). This will allow you to pull back your tie while still hiding the transparency created by your mask. 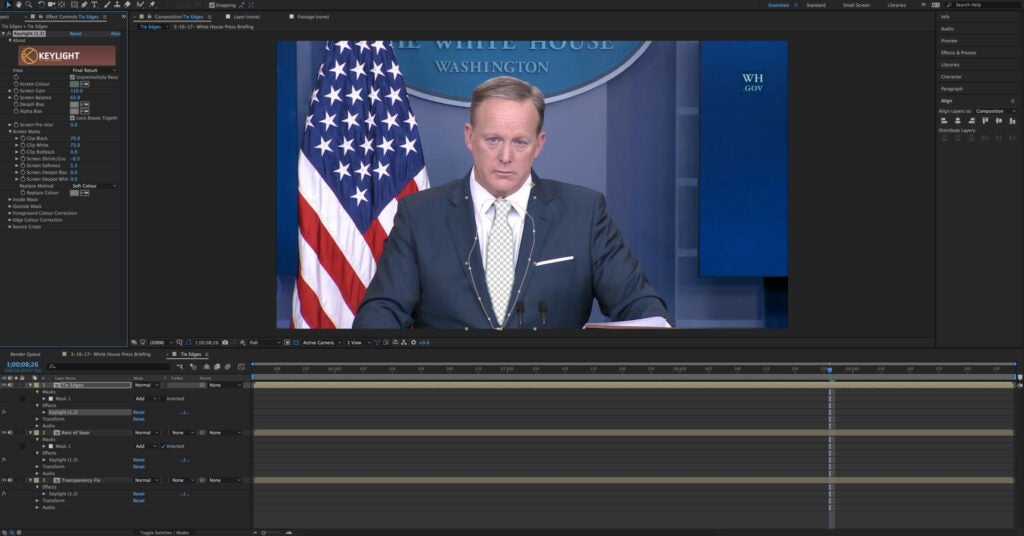 Now go into Tie Edges and pull back on that same property until the edges of your tie are just about gone. You may notice, however, that the edges are still rough. You can fix that with the very next property: Screen Softness. Push that up until you’ve got a soft edge without any tie.

Congratulations! You’ve successfully gotten rid of Sean Spicer’s tie. You can now place any footage you like underneath all of your other layers to replace the tie. To celebrate your accomplishment, here are some fireworks for you: