Hermine Is Now A Hurricane Heading For Florida

May be first hurricane to hit the state in 11 years 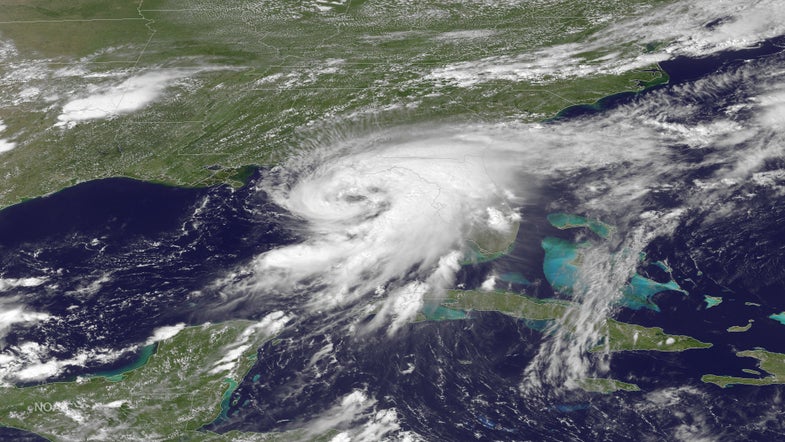 Almost 11 years ago, Hurricane Wilma slammed into Florida causing an estimate $20 billion in damage to the state.

No hurricane-strength storm has made landfall in the state since then, but that might be about to change. This afternoon, the National Weather Service’s National Hurricane center upgraded Hermine from a tropical storm to a hurricane with wind speeds of over 75 miles per hour. It is expected to make landfall in Florida tonight or early Friday morning.

Florida Governor Rick Scott has already declared a state of emergency and the state is bracing for high winds, large amounts of rain, a high storm surge that will cause coastal flooding, and even some tornados expected in the central part of the state.

Forecasters with the NHC warn people living in Florida not to focus too much on the Hurricane’s projected path. While it is heading north across the state, the forecasters note that Hermine is an “extremely asymmetric storm” and that there could still be substantial hazards to the east and south of the storm. If the storm follows the path currently predicted by weather models, Hermine may make its way up the East Coast over the weekend. Forecasters are urging people living in states along the east coast to pay attention to weather forecasts.

Hermine is the fourth hurricane of 2016 in the Atlantic. Though hurricane season officially covers a 6 month period from June to November, the time between mid-August and mid-October is typically viewed as peak hurricane season when temperatures are up, wind shear is low, and moisture is high over much of the Atlantic–the perfect environment for a storm like Hermine to grow.