What ‘gentle parenting’ can teach us about care, relationships, and communication

Its focus on communication is being praised on social media—but what does the evidence say? 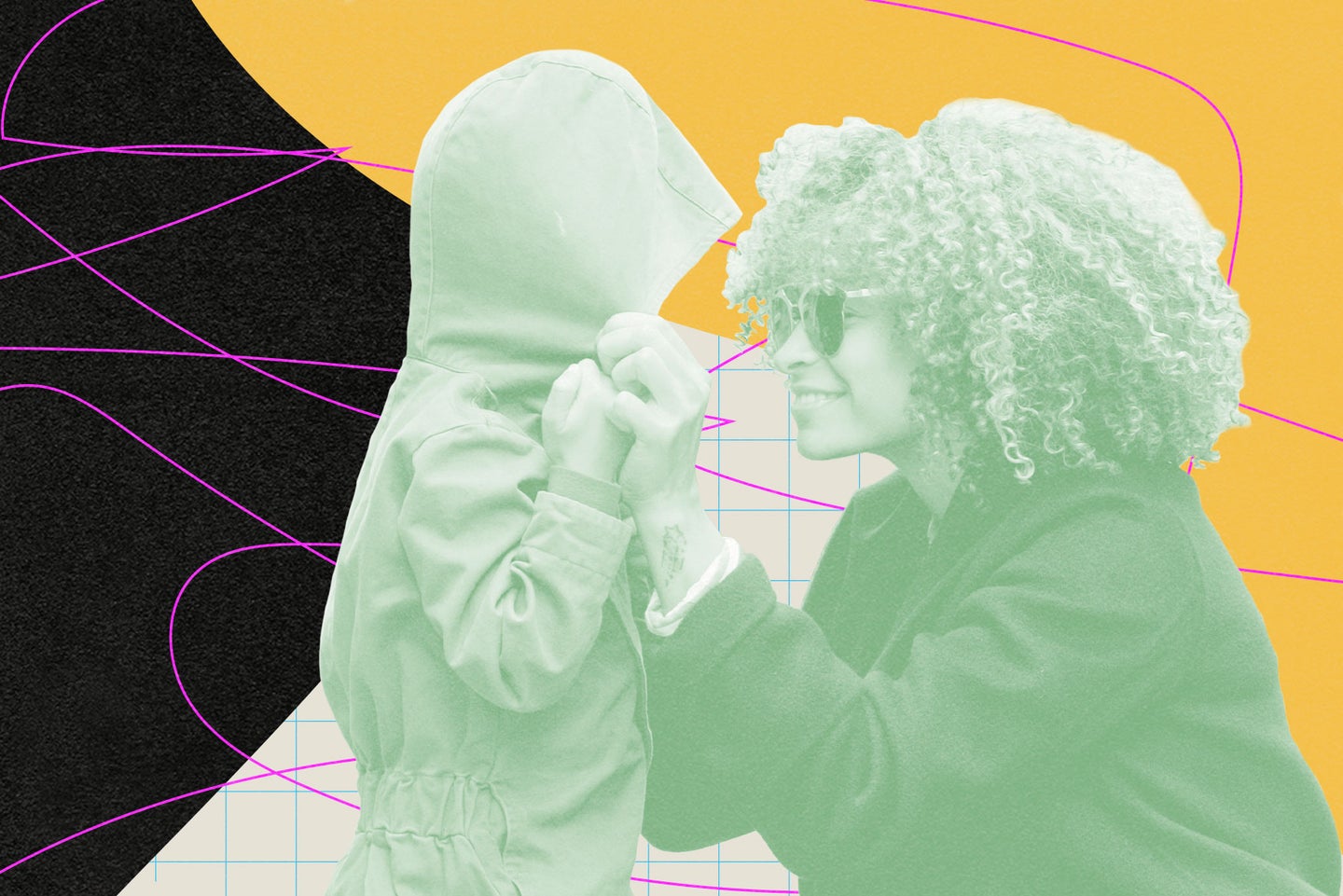 Time-ins instead of time-outs?. Sai De Silva via Unsplash
SHARE

Kristen Hernandez wants her children to be better parents than she was. After growing up in a family that struggled with “a generational curse of child abuse,” she says she tried to do things differently. But without much guidance, Hernandez was left to “wing it,” and admits she’d made mistakes along the way. “A lot of times, I was hypercritical of my kids—I felt like if I didn’t correct them immediately, it would become a habit,” she remembers. Now, Hernandez worries she’s “misprogrammed” those parenting ideas into her children, who’ve since gone on to have their own.

But three years ago, while working at a childcare referral agency in North Carolina, Hernandez read an article about “gentle parenting”—a discipline embodying everything she believed, but had never known existed. “The basic idea is that parents should be aware of their child’s developmental stage, and divorce [their] own ego from what’s happening,” she explains. “It’s about not taking behaviors personally, and nurturing children to become who they want to be, instead of how we’d like to see them.”

The term comes from British childcare expert Sarah Ockwell-Smith, author of the “The Gentle Parenting Book,” who defines the discipline as“be[ing] responsive to children’s needs” and “recogniz[ing] that all children are individuals.”

As opposed to authoritarian parenting that focuses on controlling and punishing a child’s  behavior (a discipline since proven to be largely ineffective), or parenting that uses praise and rewards to “palliate” the problem (which can also, in some cases, harm a child’s self-esteem by making them expect unrealistic levels of positive feedback), Ockwell-Smith says gentle parenting is based on a simple premise: “understanding why children behave in the way they do, looking for unmet needs, and resolving them.”

In practice, she says, that might mean looking out for child’s tiredness signs instead of keeping them on a strict sleep schedule, “feeding them on cue” instead of adhering to set dining times, or talking them through a tantrum instead of punishing them. And despite a misconception that gentle parenting is “lazy” or “permissive,”  Ockwell-Smith notes how gentle parenting often involves more discipline from the parents, since it requires them to “focus on making mindful decisions” and “role model” their own communication with patience, clarity, and self-control. Plus, she cautions, it can take years if not decades to show results.

“We have such a quick fix mentality in our society, largely due to the sensationalised parenting programmes we see on TV where a nanny comes in and turns the difficult behaviour around overnight, but real life isn’t like that,” Ockwell-Smith says. Instead, she says, gentle parenting is about helping kids become well-adjusted over time.

With the pandemic prompting schools and childcare to shut down, hundreds of ‘gentle parenting’ Facebook groups, Instagram pages, and TikTok accounts have emerged to help people support and advise one another as they learn the ‘gentle’ approach. One viral clip showed parents how and why to replace “time-outs” with “time-ins,” which Nikki Cruz, a TikTok-er and self-proclaimed “recovering tiger mama,” defines as “a super comfy, safe space [for her son] to reflect and center his mind, process his thoughts, and regulate his emotions.” Instead of sending a child to sit alone as a form of punishment, a parent might instead focus on removing them, physically or psychologically, from the situation causing them distress—not to coddle them, but to help them process and articulate why they’re throwing a tantrum. Other hits include an Instagram tips-guide encouraging parents to playfully but honestly acknowledge (and reverse) their behavior when they catch themselves yelling, as a way to model the emotional regulation they’d like their kids to show. And then there’s Hernandez, who created the “Gentle Parenting” Facebook group—a place where she could help other parents find the guidance she’d once lacked.

“It feels like the start of a cultural shift,” says Melissa Stadler, a licensed social worker with The Gentle Parenting Institute (GPI), a nonprofit offering parents online and offline coaching and therapy. “So many families want to learn more positive, evidence-based practices, but they need information and support to practically sustain them.”

Because the approach is so new, Ockwell-Smith cautions that research specific to ‘gentle parenting’ is scarce. But she notes how similar disciplines like positive parenting—also premised on “nurturance, responsivity, age-appropriate expectations and mindfully set-and-reinforced boundaries”—boasts ample evidence, and could help justify the “gentle” concept’s growing popularity.

Sanders would spend 40 years studying thousands of families to find out. His first attempt came in the early 1980s, when he piloted a home coaching model for parents of preschool-age children with oppositional behavior issues, using the early tenets of positive parenting.  Even then, the results were promising; children of trained families showed reductions in deviant behavior.

“Parenting has been shown to influence a very diverse range of developmental outcomes in children—their language, social skills, peer relationships, academic accomplishments, avoidance of crime and substance abuse,” says Sanders, who now serves as Professor of Clinical Psychology at the University of Queensland. “Yet we give nowhere near the degree of emphasis that’s required to equip parents well to do this task.”

To counter that imbalance, Sanders expanded the home-based model into Triple P:a population-level, public health intervention led by schools, clinics, and governments around the world. When designing the program in 2001, Sanders knew he had to be careful not to “preach” about what parents had been doing wrong, and instead empower them with better strategies.

He grouped those strategies into five key principles, supporting parents to create a safe and engaging environment—a home where kids have their basic nutrition, sleep, and hygiene needs met; promote a positive learning environment—reinforcing a tone of encouragement over harshness; use assertive discipline—shifting from coercive strategies to ones that help children understand appropriate (and inappropriate) behavior; maintain reasonable expectations—establishing what children should (and should not) be able to do, based on their level of development; and take care of themselves, too.

“Sometimes parents don’t realize that their own attention is very powerful, and that if they have to yell to get their kid to do something, it rewards the parent’s escalation,” Sanders explains. “So we try to teach parents how to self-regulate so they can then teach their children those skills.”

[Related: The best ages for kids to learn to read, speak new languages, and other skills]

Despite Triple P’s robust evidence base, Sanders acknowledges its imperfections; he says the quality of any parenting intervention naturally depends on the quality of the person leading it, not to mention the attention level of the parents taking it.

But then there’s the bigger question of access: making sure that families most in-need of support can actually get it. As social media swoops in to help—amplifying tidbits of these tried-and-true theories to new audiences in new formats—Sanders worries that “popular opinion” may overshadow the science underlying them. And while he appreciates the similarities positive parenting and gentle parenting share, he says it’s crucial for the latter to develop its own unique evidence base if it’s to become widely accepted.

Triple P has tried to eliminate access barriers by offering free or very low-cost programming through government sponsorships. More recently, they’ve also created a take-anytime-online version for $80. But a growing number of parents seem to seek advice from the networks where they’re already active; a recent Pew Survey of 2,000 mothers and fathers, for instance, found a majority get parenting advice from social media, and that less affluent caregivers are even more likely to do so. A small qualitative study of mothers further found that parents especially appreciate getting guidance through Facebook in order to crowdsource multiple viewpoints, and to feel immediate support.

“Over the last 10 years, parents have started to talk to each other in a way they never really did before, and in doing so, they’re starting to realize that the ‘traditional parenting practices’ being suggested to them are creating power struggles, tantrums, and a sense that they have to constantly be imposing some infinitely escalating consequences,” says Melissa Stadler, the therapist with GPI.

Stadler knows from personal experience; she remembers feeling a “visceral disconnect” between what felt right to her as a new mother and the traditional advice she’d been told: “let your baby cry it out” or “spanking is okay,” for example.

But when she heard about gentle parenting in a book, she immediately loved its emphasis on “maximizing connection between parent and child,” and started a Facebook group with other psychology professionals to help spread the gentle approach. “All of these parents are finally saying to each other, ‘well, if [our child] conflicts are arising from an unmet need, what if we just met that need?”

[Related: Yes, little kids should do chores. Here’s how to get them started.]

Still, Stadler says, while GPI doesn’t turn people with financial barriers away from their services,  it’s not lost on her that privilege plays a tremendous role in determining which families can actually follow the gentle parenting strategies, which often take more time and patience than “traditional” ones.

“When you’re working three jobs and you’re exhausted and don’t know if you’re gonna be able to pay your rent this month, it’s harder to keep your cool when your toddler is melting down,” she says. “Not everyone has equal access to the support that it takes to parent gently, and as long as that’s the case, it means certain kids don’t have equal access to the kinds of outcomes gentle parenting produces.”

But Stadler says “having this free Facebook group, where any parent can come and post a question and get advice from board-certified behavioral analysts” is a step in the right direction.

The same is true for Hernandez, now a grandmother, who started a “Gentle Parenting” Facebook group four years ago. What started as a humble resources forum intended mainly for her daughter and work clients has evolved into an active online community, where, nearly every hour, parents ask questions, share tips, and affirm one another through doubts and frustrations.

But when she thinks about her childhood, and how her father—a survivor of extreme child abuse—fought to pass laws ending parental violence, she’s proud, too, of the gentle parenting successes that hit closer to home.

“I’ll see my daughter ask her daughter if she wants to take a nap or a bath, and if her daughter says no, she just says ‘Okay,” Hernandez says. “”It’s just really nice to see them developing that relationship through trust and confidence, and how being open to new ways of raising our kids has made a difference through the generations.”