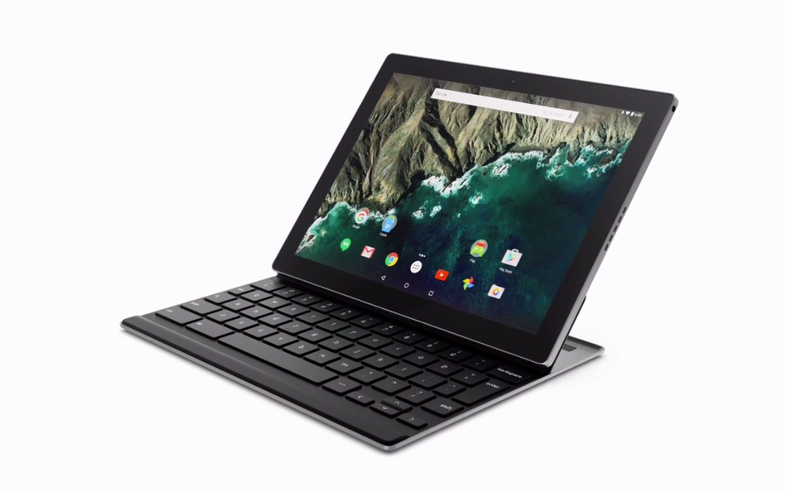 Google’s Chromebook line is getting a new lightweight addition: a tablet. The Pixel C, which Google announced at its Nexus event today in San Francisco, will be a 10.2-inch tablet with a USB-C charger. While this isn’t a product on the Nexus line, the Pixel C will actually run Android Marshmallow. It runs with a screen resolution of 2560×1800 (308 ppi) and has 3 GB of RAM. The tablet is powered by a Nvidia X1 quad-core processor and Maxwell GPU, and ha s stereo speakers.

“C” stands for convertible, because the tablet will integrate with a bluetooth keyboard that attaches magnetically to the Pixel C. The keyboard tucks behind the Pixel C when it’s not needed, and inductively charges when not in use. Google says that the keyboard will function with just a few minutes of charging per day.

Google already has a line of tablets, the Nexus 7 and Nexus 9, but the Pixel C stands as the high-powered workstation tablet. This comes in the wake of Apple’s iPad Pro, and Microsoft’s Surface Pro series. The Pixel C is a huge departure from the traditional Chromebook model, which has traditionally run ChromeOS. The original Pixel was also a way different form factor: a laptop. Shifting towards hybrid tablet/laptops makes sense, bringing the Chromebooks closer to Google’s better-performing Nexus line.

The Pixel C will start at $499 for a 32 GB model, plus $149 for the keyboard, and is expected to ship in time for the holiday shopping season, later this autumn.