Build It: A Touch-Activated Speakerphone 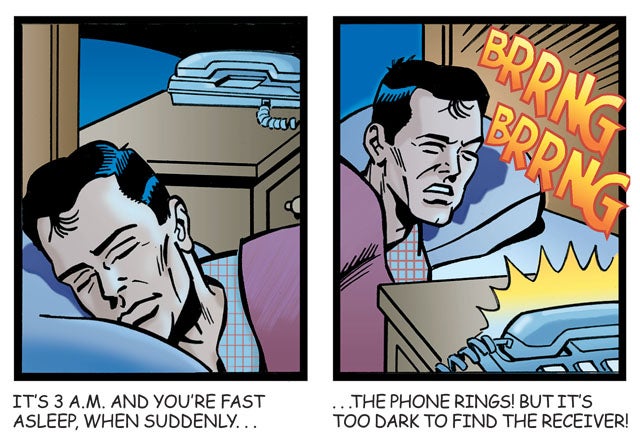 It’s the middle of the night, when suddenly you’re jarred awake by your ringing phone. It must be urgent, so you can’t waste time—or worse, miss the call—fumbling around trying to find the receiver. Instead, simply touch your hand to the top of your bedside table to answer the speakerphone. The secret is a stud finder (stuffed into the drawer of the nightstand). With a few modifications, it can sense when your hand is near it and activate a switch connected to your landline. You can use versions of the system to connect other appliances like lamps and air conditioners and control them by touch as well. It’s the next best thing to having night vision. 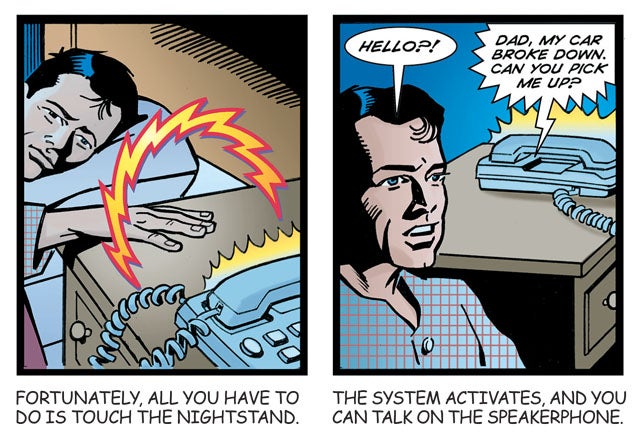 Build Your Own Touch-Activated Speakerphone

1. Open the stud finder’s [A] battery compartment and remove the door and guide. Solder the power-supply wires to the battery tabs.

3. Solder the unattached ends of the wires from the relay and the photoresistor to the stud finder.

4. Solder wires to the contact terminals of the relay. Attach the photoresistor to the upper red LED.

5. To enable the phone to receive info from the stud finder, solder wires to the phone’s speaker-button pins. Drill a hole in the phone, insert the wires through it, and crimp them into the battery-pack connector.

6. Drill a hole in the back of your night table, and stick the stud finder in the drawer. Attach the phone to the stud finder’s battery-pack connector terminals.

Here’s what you’ll need for this project: Now, start with your stud finder, and remove the screw from the back of it. You’re with us so far, right?

Remove the battery guide (rectangle with two holes) from the finder.

Solder the power supply wires to the battery tabs on the stud finder. Positive goes to bottom (as shown in the photo).

Wrap a four inch piece of red wire wrap to one of the relay coil terminals.

Wrap a ten inch blue wire to one side, and a ten inch red wire to the other side, of the Cds photoresistor.

Wrap the other end of the red wire from the photoresistor to the open coil terminal on the relay.

Solder twenty inch red and black wires to the contact terminals of the relay.

9. Back into the Battery Compartment

Attach the Cds photoresitor (face down) on the uppermost red LED. Blue painter’s masking tape works well for this task.

Crimp the red and black wires from the relay (contacts) to the battery pack connector.

Disassemble your speakerphone by removing the screws on the bottom (we used Radio Shack #430-0274). Remove the screws that hold the pushbutton board.

Find the contacts for the “speaker” button.

Find a convenient spot (pins 9 and 10 from the top on this machine) and solder ten-inch blue and red wrap wire to the pins.

Drill a ¼ inch hole in the bottom of the phone, and insert the red and blue wires through this hole.

Put the screws back into the board and the bottom of the telephone.

Solder the ends of the red and blue wrap wire to ¼ inch long pieces of 22 gauge stranded hook-up wire.

Crimp these wires into the battery pack connector.

The telephone is now ready to receive information from the stud finder.

Attach a rubber band around the stud finder. Insert a folded piece of cardboard into the switch area. Cut and insert the “hook” part of some Velcro onto the fuzzy black material on the stud finder. Remove the plastic from the Velcro, exposing the sticky side up. Set aside.

Drill a hole in the back of your night table (large enough to insert the power transformer). Insert the drawer, and then stick the stud finder onto the top near the front (so that you can open the drawer). Be certain that nothing is sitting on the night stand above the stud finder. Attach the phone to the stud finder (battery pack connector terminals). Turn the stud finder on by moving the cardboard onto the stud finder’s switch. Because the stud finder “calibrates” every time it is turned on (takes about one second), you may have to turn it off and on two or three times before it quits beeping. Try to keep your hand away from the “sensor area” while it is calibrating.

22. Amaze Your Girlfriend (just make sure you know who’s calling)

When the phone rings, pass your hand over the table near the front and the speakerphone will answer!
build it
DIY
leds
September 2009