The Making of a Football

A behind-the-seams look at where the magic begins 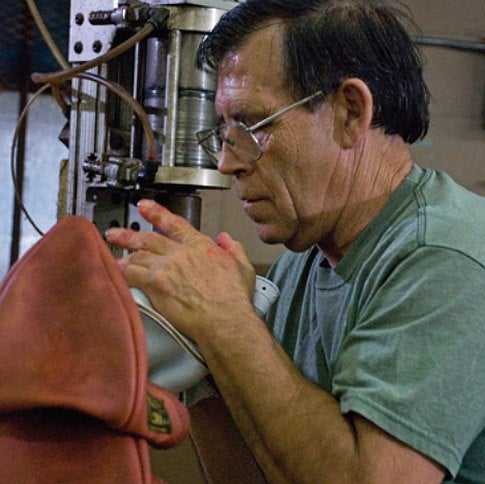 What makes a cowhide into a football (nope, they’re not pigskins)? In the case of the NFL, it’s a trip to Ada, Ohio (population 5,847). Since 1941 Wilson has provide the official NFL game ball and since 1955 those balls have been laced and branded in a single manufacturing plant in Ada, Ohio. The only dedicated football plant worldwide pumps out more than 700,000 balls. each year. Ain’t that America?

A single cowhide results in ten footballs, each constructed of four panels and a single piece of lace woven through 16 holes (don’t tell us you really thought it was pigskin?). Competing manufacturer Baden claims that the area around the spine and shoulders of the cowhide are ideal for football construction (lower-grade models use the rest of the cow). A total of 120 official Super Bowl balls have been made in the two weeks preceding the big game. The four identical panels are sewn together before the holes are punched for the lace. A rubber bladder is then inserted and the ball is inflated to 13 PSI. The balls must measure between 20.75 and 21.25 inches in circumference and 11-11.25 inches in length, and weigh between 14 and 15 ounces. According to the NFL, home teams are required to have 36 balls for outdoor games and 24 for indoor games. Each ball is tested for appropriate pressure two hours prior to the game. Twelve special balls, still sealed in their box, are opened by the officials and exclusively used for the kicking game. The balls are branded with a “K” but are otherwise identical to regulation balls.

For those lucky enough to be in Tampa, a miniature version of the Ada factory has been built at Raymond James Stadium for fans to tour. In the absence of the model, take a look at this video showing glimpses of the hand craftsmanship still used to produce the pigskins (oops, make that cowhides).