Here’s where biodiversity is disappearing the quickest in the US

Most Americans live a few miles away from areas in need of conservation. 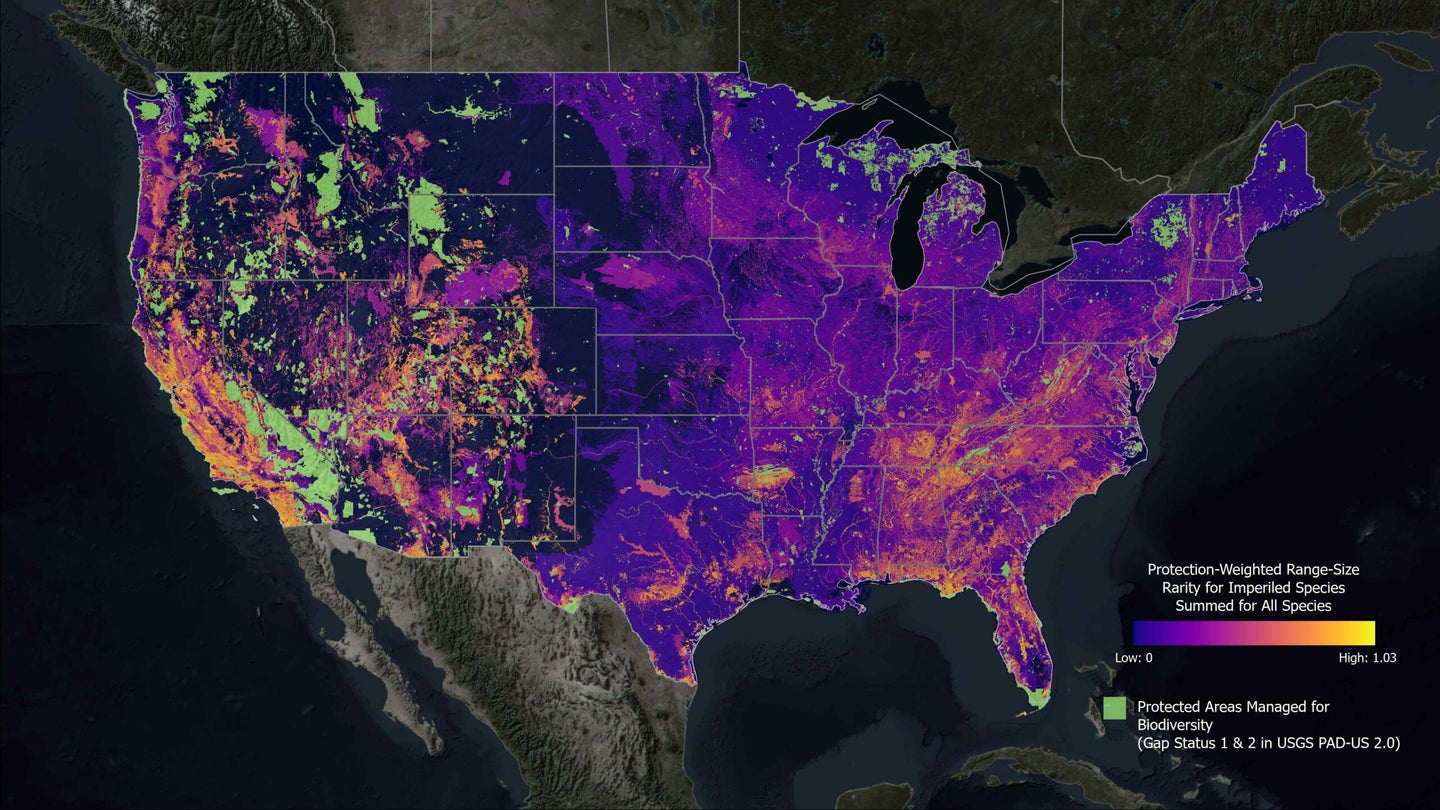 Biodiversity makes the world go round—from tiny freshwater creatures to giant trees, the living things on planet earth are what makes it flourish. But in recent years, humans haven’t been all too good at preserving biodiversity—research has shown that nature is declining in unprecedented ways. As of 2019, one in four species on earth are at risk of extinction, and rates of extinction now compared to the times before human activity are about a thousand times higher (with higher rates predicted in the future). Humans are directly impacted by biodiversity loss when it comes to things like water availability and agriculture, which can become stressed as species die out or suffer.

This isn’t only devastating purely due to loss of the nature that makes our world special—it’s also a climate change crisis. Not only does climate change power biodiversity loss, but the weakening of natural ecosystems makes it harder to combat growing greenhouse gas emissions. For example, as climate change disasters like droughts and wildfires hit the Amazon rainforest, the trees and wildlife have a harder time bouncing back to normal—hindering their ability to store carbon.  Just last month, the most recent IPCC report stressed the importance of preserving nature—14 percent of all species face a “high rate of extinction” even at the most optimistic warming outcomes.

[Related: Want to better understand the biodiversity of a forest? Ask the locals.]

“Loss of biodiversity, stresses on agricultural productivity, human health risks—the themes highlighted by WGII are not new,” Katharine Hayhoe, chief scientist for The Nature Conservancy, said in a release last month. “We’ve been tracking most of them for years now. What is emerging is the indisputable evidence for how climate change is acting to compound and conjoin these challenges at a rate humankind is currently struggling to keep pace with, and how these impacts often hit the most vulnerable first.”

Still, even knowing how drastic the effects of biodiversity loss can be, getting information on what species are suffering, and where, can be tricky. Traditionally, maps may focus on the large-scale range of a species, and largely focus on vertebrate animals. A new study out last week in Ecological Applications, however, zooms in on the most likely suitable habitat for thousands of species—ranging from the Santa Cruz Island Cypress to the Twisted Dwarf Crayfish to Cockerell’s Bumble Bee, across the US.

What they found is that in the lower 48 states, there are nearly 300 species of at-risk creatures and plants that fall completely out of currently-protected wildlife zones. These protected areas make up a mere 13 percent of the continental US, or around 316 million acres (though the Biden administration has a lofty goal of getting that number up to 30 percent by 2030).

“When we think of biodiversity, we may reflect on tropical rainforests or coral reefs, where the richness of life is indeed staggering,” author Healy Hamilton, chief scientist at nonprofit NatureServe said in a release, “but our own country harbors globally significant biodiversity. The findings from the Map of Biodiversity Importance show us areas critical for preventing extinction across the nation.”

Additionally, out of the over 800 species investigated on federal lands, around 85 percent aren’t protected under the federal Endangered Species Act, 326 of which occur primarily on federal multiple-use lands. Around 66 percent of areas of unprotected biodiversity importance were found primarily on private land, and according to the new findings, around 90 percent of Americans live “within 30 miles of an area of high importance to biodiversity conservation,” said Sean T. O’Brien, President and CEO of NatureServe in the release.

“Most people are not aware that we have so many imperiled species in America, much less that almost all of us live close to a conservation hotspot for biodiversity,” O’Brien says.

But there are ways to protect biodiversity no matter where you are located: supporting local farms, planting native plants and bee-friendly flowers in your yard, reducing water use, and supporting local and responsible farmers are all a good way to start. And if you have the spare time, searching for ways to volunteer in local conservation efforts can also help rebuild and protect the land that houses our rarest and most at-risk flora and fauna.