One company squeezes fish for algae oil while others flounder. 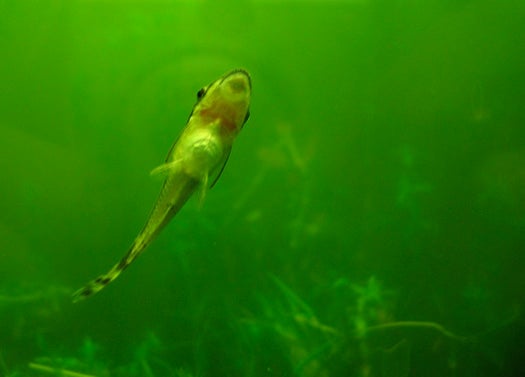 It’s been a few years since the race to make biofuel from algae really heated up. Today more than 50 companies are trying to find a way to affordably squeeze oil from slime, and it seems like the golden age for these tiny autotrophs.

However, the hurdles to reach commercial production of algae-oil might be too great for many of these ventures. This spring a pioneer company, GreenFuel, shut down operations after running out of money while trying to make a commercially viable process. Even stranger, another promising startup called Livefuels has just announced that it is making a bizarre change in its method. Instead of continuing to develop efficient ways to extract oil from algae, Livefuels is now going to feed their algae to fish and then squeeze the fish to get the oil.

It’s unclear how much more efficient it might be to produce oil from fish who eat algae than from algae itself. But the fish bypass some of the high costs of algae biofuel: the equipment and energy needed to filter algae from the water and squish out the oil. At the same time, you don’t have the luxury of reusing your fish. (Algae can be “milked” more than once.) The fish and “other aquatic herbivores” used by Livefuel will likely have to die.

Meanwhile, the field of algae fuels has high goals, few operations are actually producing any results. Solix, a company Popsci profiled in 2007, reported producing algae oil at about $33 a gallon, which very well might be the best possible right now. The newest venture on the block — a collaboration between Exxon Mobil and geneticist J. Craig Venter — has admitted that commercial viability is at least five to ten years off.

All said and done, the Exxon-Venter project and others suggest that with sufficient time and development, oil from algae should eventually be affordable.

Though if Livefuel is seriously moving into the fish-squeezing market at this point in the game, it can’t bode well for vegetarians.