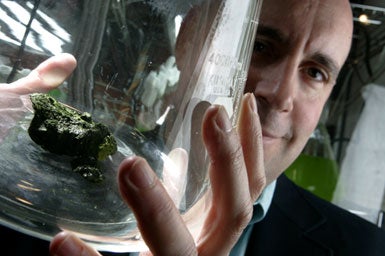 Earlier this week, we reported on research efforts to produce hydrogen gas for fuel cells through artificial photosynthesis and discovered the technology was still a long way off. Well, how about good old natural photosynthesis? That, too, is a process in its infancy because there are quite a few things we need to manipulate in order to produce enough hydrogen to make it worth our while.

The best candidates for the job are a handful of varieties of algae which contain the enzyme hydrogenase. The enzyme basically produces hydrogen as a waste product, but in miniscule amounts. The goal of the researchers studying the potential of algae is to take the part of the enzyme which produces the gas and insert it into the plant’s photosynthesis framework, thereby coaxing the algae to produce significant amounts of hydrogen by-product.

If the technique can be perfected, algae will present immediate advantages over other biofuels. It can be grown nearly anywhere and without the need for large tracts of land. It would also not be competing with food staples for space, the way corn is currently disrupting the market value of other grains. So now the race is on to see which process will find commercial success first.