The Aquanaut’s Home Under the Sea

Batteries, a bicycle, a bathing suit, algae and sandwich delivery are all Lloyd Godson needs to live underwater 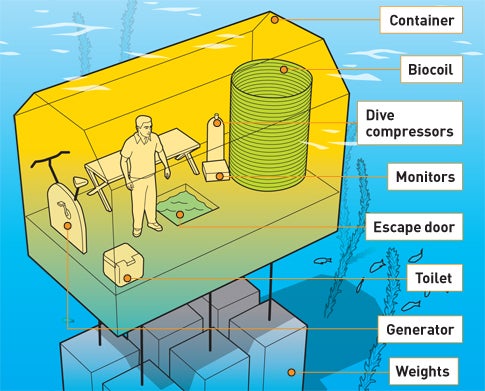 This past April, entrepreneur and science hobbyist Lloyd Godson awoke in the middle of the night with a pounding headache. He needed fresh air. Instead he drew in a deep breath and hoped that the algae blooms inside his 8-by-10-foot underwater home would give off enough oxygen to get him through the night. Because of steadily rising blood pressure, Godson, 29, emerged later that evening dizzy but healthy, bringing to a close his 13-day mission to live solo at the bottom of a lake near Albury, Australia.

Funded by Australian Geographic magazine, Godson’s effort was part science experiment, part educational outreach. As a marine biologist, he wanted to learn more about sustainable living in a closed ecological system. He fashioned the sub from mostly recycled scrap metal welded to keep water out. Inside, a “biocoil” full of water and algae helped to absorb carbon dioxide and supply oxygen [see “The BioSUB,” below]. At the same time, he hoped to inspire future aquanauts by broadcasting live video to students worldwide.

Although his stay is not a record for length of time spent underwater (in 1992 aquanaut Rick Presley set that, at 69 days), Godson joins the rarefied ranks of human aquatic inhabitants, among them marine researcher Dennis Chamberland. In 1997 Chamberland lived in NASA’s Scott Carpenter Space Analog Station, a seafloor abode near Key Largo, Florida, for 11 days to test life-support systems for space.

Godson is helping Chamberland prepare for a record-breaking 80-day stay aboard the Leviathan Habitat off the coast of Florida in 2009. Why not undertake the mission himself? “I like the things we have up here,” he says.

**Container: **The two-ton, mostly recycled-steel box is moored to the lakebed by 28 tons of concrete.

**Biocoil: **A pump churns water and algae through a coiled tube. The algae absorbs carbon dioxide and supplies oxygen.

Dive Compressors: The algae-filled biocoil tube offers a nice experiment in human-plant sym-biosis, but 12-volt compressors floating on the surface above the shelter are Lloyd Godson’s primary source of oxygen.