Super 8 film is making a comeback. Here’s how to get started.

Here's everything you need to know to begin shooting with the vintage home movie format. 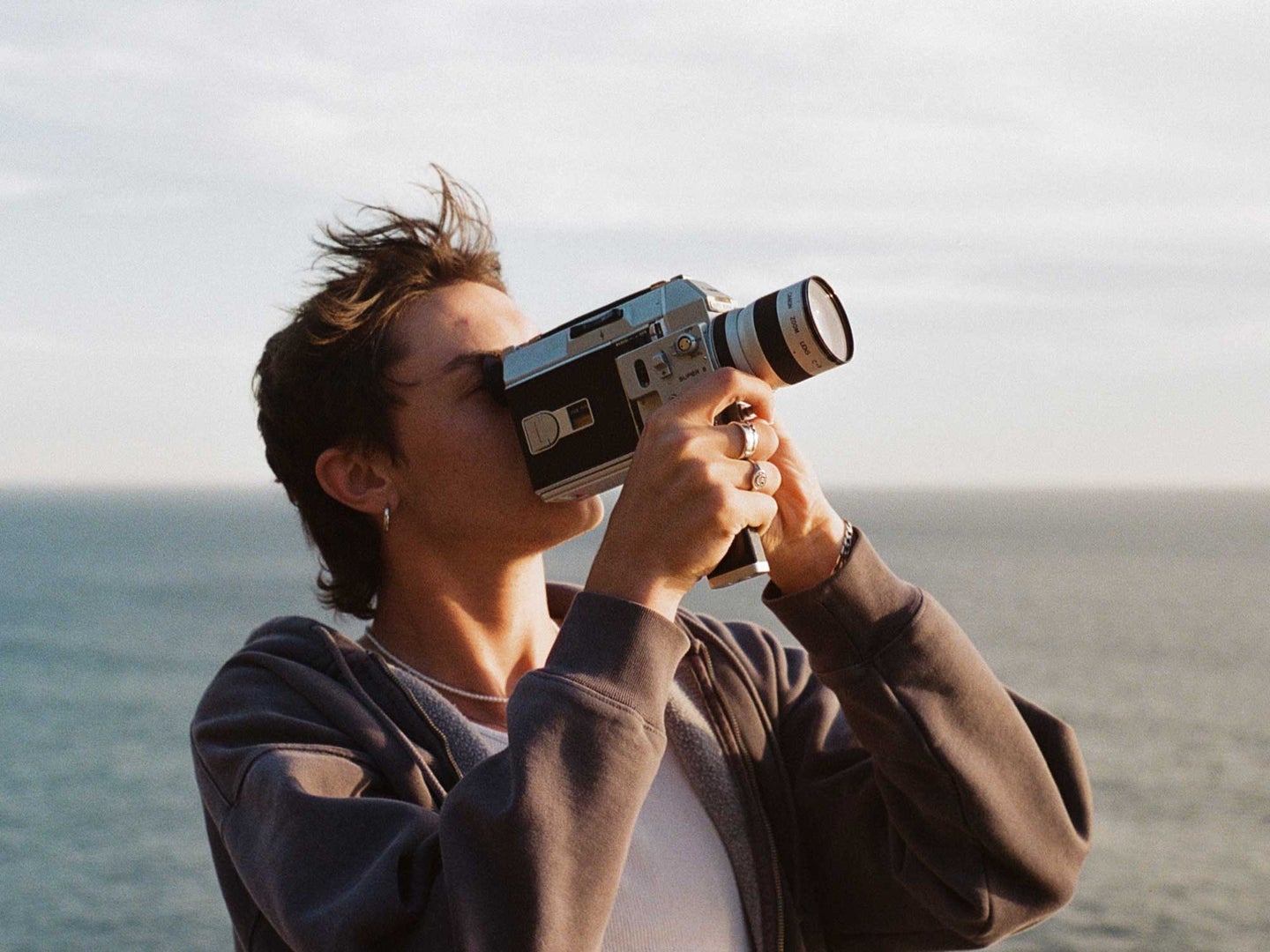 Here's your guide to getting started with Super 8 movie cameras. Noah Buscher on Unsplash
SHARE

Super 8’s grainy, nostalgic look is having a moment right now, popping up everywhere from music videos to blockbuster TV shows. But even outside of pop culture, the consumer-friendly Super 8 film format is winning the hearts of amateurs and the analog community. If it’s caught your eye, too, here’s everything you need to know about getting started shooting Super 8 film.

This format might just be the king (or queen) of home movies. Introduced in 1965 by Kodak, it was a step up from the 8mm film that came before it, both in terms of quality—thanks to its larger frame size—and usability. This led it to be positioned as the new movie-making format of the masses.

More cost-effective than 16mm or 35mm, Super 8 film is housed in inexpensive plastic cartridges, so it’s easier to handle and load, too. These cartridges also convey to the camera important bits of information, like the film speed as well as filter information for B&W film. And in 1975, a magnetic strip was added to the cartridges to capture audio.

With its launch, Super 8 put the power of creativity in the hands of regular people. Suddenly, everyone was a movie maker.

Today, the medium is still very much alive—and by many indications—both doing well and picking up steam. Aside from the enthusiasts scooping up used cameras to record their summers, some of the biggest names in entertainment are turning to film—and Super 8 specifically—for their creative projects.

What Super 8 camera should I buy?

How much should I pay for a Super 8 camera?

Options are plentiful when it comes to used Super 8 cameras. Major brands still circulating include Canon, Nikon, and the king of Super 8, Beaulieu. Other brands like Minolta and Chinon sell for under $100, while Canon and Nikon Super 8 cameras can run as low as $300, depending on the model. But Beaulieu cameras are sure to command a heftier (over $500) price tag.

You can buy Super 8 cameras pretty much anywhere secondhand electronics are sold, including Ebay, Etsy, Facebook Marketplace, and used camera shops (like Pro8mm). But also know that an astute searcher may find luck befalls them at random garage or yard sale. The main thing you want to do when buying a Super 8 camera is make sure the motor works. If it doesn’t, you won’t be able to advance your film.

What to look for when buying any Super 8 camera

Some cameras may have a crank and are completely manual. Others will require batteries. If possible, go for a film-tested camera and always ask to see the footage and any CLA (clean, lube, adjust) certification the seller may have. It’ll be more expensive but save you the agony of wasted money on the back end. Developing Super 8 film isn’t cheap any way you slice it, so better to know you’ve got a working camera beforehand.

If you want to get your toes wet, there are Super 8 cameras out there under $100. The Chinon 723 XL is a good option with its autofocusing capabilities, and so is the Minolta XL 400 with its Zoom Rokkor-Macro lens, which has 13 elements. Both will shoot at 18 frames per second (fps).

If you can’t find those exact models, consider also the Bauer C series (A512 in particular), the Minolta Autopak 8 D6, and the Chinon 213 PXL. The Bauer A512 specifically may run you a little over $100.

The sought-after brands live here: Canon and Nikon occupy the top end of this range. Particularly, the Canon 310, 514, or 814 series are popular choices and finds. At the time of its release, the Canon 514XL had the world’s fastest lens at f/1.0. While the Auto Zoom 814, which is comprised of an all-metal mechanical design, was the first Super 8 camera to have an 8x zoom range with an f/1.4 lens.

There are also a handful of other Super 8 cameras that fall on the lower side of the spectrum, too, such as the Sankyo Sound SL-60S and Elmo 1012S-XL. The Nikon R8 and R10 would be considered the high end of this range.

If you’re sure Super 8 is your medium, you might find yourself fancying the fanciest of them all: The Beaulieu 4008ZM II. With beautiful design and a reputation for being the best Super 8 camera ever created, there’s a lot to its name. Thanks to its built-in rangefinder, plentiful shooting options (you can adjust the frame rate from 2fps to 50fps), and interchangeable lens design, this French-made camera gives creators plenty of control over their vision. Expect to spend at least $600, with mint kits running up to $5,000.

Also on the market are the Beaulieu S2008 and the 5008S, the latter of which is considered the professional model.

Types of Super 8 film and where to buy it

Kodak is the main purveyor of Super 8 film, and it’s available from major retailers like Adorama, Amazon, and B&H. The options are Kodak Vision 3 (color-negative 50D, 500T, and 200T); Tri-X reversal 7266; and Ektachrome 100D color reversal.

However, you can also find B&W Fomapan R100 film, and Pro8mm packages their own, which you can buy in a bundle to include processing. Film cartridges run about $40 ($27 if you’re going for Fomapan) and can record 2.5 minutes at 24fps and 3.3 minutes at 18fps. Expect to pay at least $25 to process it.

If shooting Super 8 for the first time, we recommend grabbing the Kodak Vision 3 50D and shooting in daylight. 500T and 200T are balanced for tungsten light, and as a color-reversal film, Ektachrome is quite saturated. These might be better to experiment with once you’re more familiar with the medium.

How to use a light meter for Super 8 video

Most cameras will often come with an internal meter, but unless you’ve confirmed it works, an external light meter is always a solid investment, whether you shoot stills or video. I personally use a Sekonic L358, but we’ve also got a list of best light meters for you to choose from. If you’re not ready to take the plunge on a real light meter, there are some apps, like Lumu, that have a video mode.

To use the light meter, you’d best take a look at the instructions, as each may differ slightly in how to operate the video mode. But, generally, you’ll want it to be in the f/s mode (frames per second), as opposed to A (aperture) or T (for shutter speed). Know that the frame rate you choose will affect how long you can film—at 24fps, you won’t shoot as much footage vs. 18fps.

Where to get Super 8 film developed

There are still a good number of film processors that will develop (and scan) Super 8 film. A good bet is to see if there’s a local spot in your area that still processes Super 8. If not, see the list below for where to develop Super 8 film.

Pro8mm has an incredibly robust lineup of offerings, from selling/renting Super 8 cameras to film development packages. They’ve processed film for Harry Styles, Drake, and Katy Perry, to name a few. Their packages include film, processing, development, and color correction. If you find yourself really bitten by the analog film bug, they’ll also do 16mm, double Super 8mm, and Super 16mm films.

The Film Photography Store has many films on offer, from Super 8 to 35mm and 16mm, which they will also develop and digitize.

Negativeland is a motion-picture lab that will process Super 8 and 16mm films.

How to develop Super 8 film at home

This is a real commitment and should only be attempted if you have prior experience developing your own film. If you don’t, try 35mm first before taking on the (literally) gargantuan task of processing Super 8.

For those who want to take the plunge, any old developing tank won’t do. You’ll need a special drum that will accommodate the reel, which is typically 50 feet per cartridge. A Jobo Super 8/16mm drum kit (drum, tank, and foot pump) will run you about $880—and that’s before you’ve procured the chemicals.

After you’ve picked up the drum, you’ll want to consult the shop on the chemicals you’ll need to process the film. Then, you’ll need to make sure you have space. Practically, will you be able to hang 50 feet of film somewhere while it dries? This video delves into more specifics to consider.

How to convert Super 8 film to digital

Digitizing film reels is usually included or an optional add-on to the development package at labs. However, if you’re going to shoot a decent volume of film and want to save a little money, you can scan it at home—with less hassle than the development process.

Scanners are available from Amazon, B&H, and other retailers, and Wolverine Data seems to be the brand of choice. The Wolverine 8mm and Super 8mm Film Reel Converter retails for $299.95 and will digitize film at a resolution of 720 pixels. For $100 more, the Wolverine Digital Movie Maker Pro scans at 1080 pixels. Simply load up the film and the scanner does the rest, compiling the footage onto an SD card (that you must provide). This video offers a detailed tutorial on how to set yours up.

Feeling daunted? Don’t be—at the end of the day, you only need three things: A working camera, film, and a place to develop. Should you be searching for additional resources, try the Pro8mm Super 8 Reference Library, which features tips, a film calculator, education, manuals, and more. Super8camera.com is also a wonderful compendium of the medium. Happy movie-making.