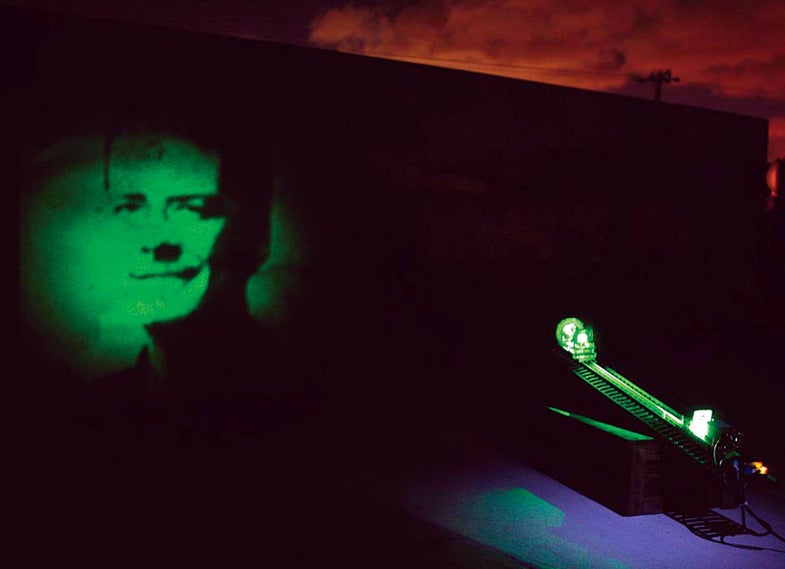 Australian artist Chris Poole was driving around his native Perth recently, when some curbside garbage caught his eye. Unlike the average scavenger, Poole wasn’t searching for couches or chairs. He had his eye on an old slide viewer—a key component for his next project, a laser-based projector that could display family photos (albeit with a green hue) to the entire town.

Thanks to his penchant for collecting, Poole already had the basic materials. To start, he rewired a tiny green laser—the kind used in a pointer—so it could work with a longer-running battery pack he had lying around, which he had pulled out of an electric bicycle. Next he nailed an electronics-mounting frame to a three-foot-long wooden board and set the laser at one end, aimed down the frame. He snapped in a lens from a used disposable camera at the other end and set a makeshift slide holder and the scrapped slide viewer’s lens in between. The viewer enlarges the beam so it covers the slide, and the camera’s lens lets him adjust the focus.

Now he can temporarily tag the side of a building with, say, the face of former Aussie prime minister John Howard. It’s all for fun, but Poole’s plan to project slides of microorganisms in public places could lead to a new form of mass science education. Or, with their eerie green glow, spark fears of a Martian invasion. 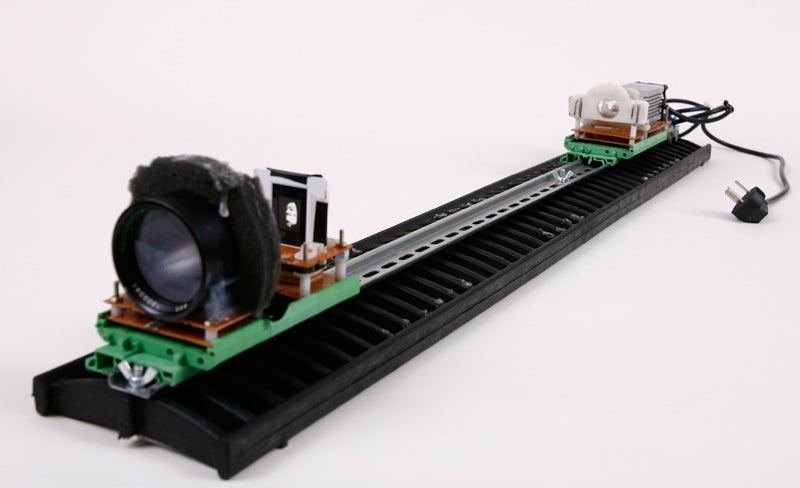 Chris Poole built his laser projector by snapping the parts—many of which he found by the side of the road—onto a mounting frame called a dinkle rail.

BRIGHTNESS: The laser uses about 60 milliwatts, which can project an image up to 100 feet away, but Poole could easily substitute a laser with a range of as much as 400 feet.

FOCUS: By moving the salvaged camera lens—the last part that the laser shines through—forward or back, Poole can easily adjust the focus of the projected picture.

PORTABILITY: Poole can rejigger the parts to fit into a small case. The light bounces between a set of mirrors, then through the slide, a camera lens, and a hole cut into one side. He hasn’t used it much, however, since he’s been told it looks like a suitcase bomb.