A passerby recently asked Joey Ruiter where he found his aluminum-encased Star Wars pod-racer look-alike. “It’s from the future,” Ruiter replied. Apparently convinced, the woman nodded and walked away.

A lifelong boater, Ruiter believes that manufacturers focus too much on creature comforts, at the expense of the driving experience and environmental concerns. So the Grand Rapids, Michigan, product designer decided to try to create a scaled-down recreational boat that would handle like a small twin-engine airplane and could maneuver into hard-to-reach places typical cruisers can’t go. He stripped down two jet skis, built a cockpit, and worked with a local dune-buggy company to construct the frame that holds his 18-foot-long prototype together. For the three main sections, he cut and formed shells from aluminum, instead of the standard fiberglass.

With no external propeller, the boat can run in as little as five inches of water. It’s green too, since Ruiter used all recyclable materials. Now he’s building a retractable hydrofoil, which could crank the top speed from an estimated 45 mph to over 65

Each jet-ski-derived pontoon sucks water in and thrusts it out the back for propulsion. To handle bumpy days on the lake, each has an independent suspension system.

Ruiter rigged the frame so that the two 215-horsepower motors it’s designed to hold can be raised or lowered relative to the cockpit. Combined with the hydrofoil, he hopes this will lift the cockpit out of the water when the craft hits high speeds.

Dual throttles-placed up high, similar to an old chopper-style motorcycle-allow the operator to pivot in place. When turning through tight corners, the trailing cockpit drifts, fishtailing dramatically like a car in a chase.

The H2Whoa Credo: DIY can be dangerous.

We review all projects before publishing them, but ultimately your safety is your responsibility. Always wear protective gear, take proper safety precautions, and follow all laws and regulations. 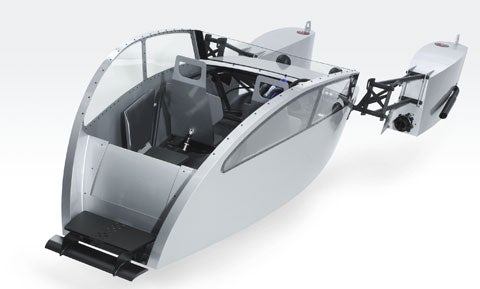 The boat’s pared-down design lets it maneuver into hard-to-reach places off limits to most boats. 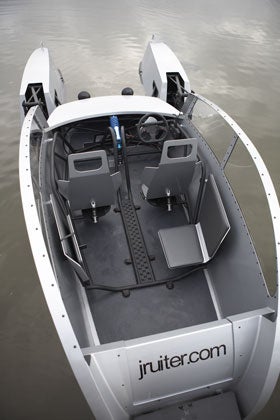 No external propeller means the boat can run in as little as five inches of water. 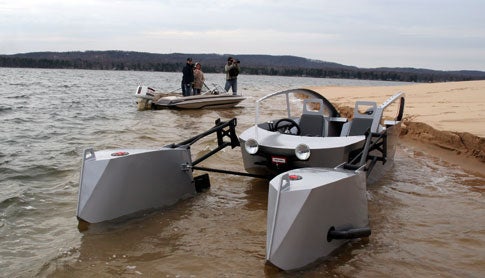 Joey Ruiter made his boat´s main sections out of strong, recyclable aluminum.