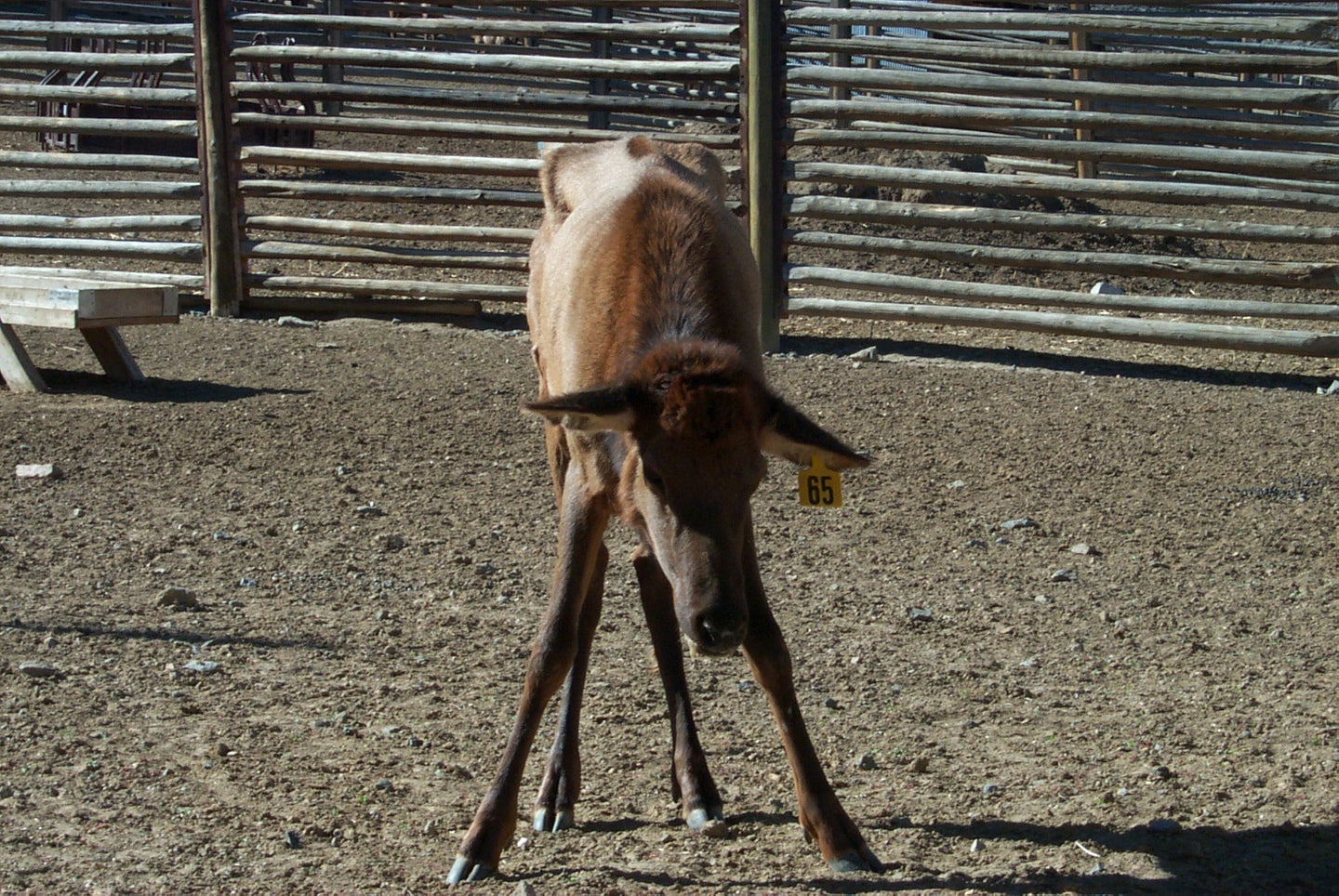 If you’ve heard of “zombie deer,” you’ve heard of the horrors of chronic wasting disease. CWD causes infected animals to stumble through the forest, sometimes drooling and becoming aggressive towards humans they once feared. They lose weight. They’re listless. The spookiest thing about it, though, isn’t its resemblance to zombie-dom—it’s the fact that it’s an incurable prion disease.

Prions are misfolded proteins that are somehow infectious (we’re still not really sure how or why) and for which we have no treatments or cures. If you were to catch one, you’d basically deteriorate over the course of several months, possibly losing the ability to speak or move, and eventually you would die. Doctors wouldn’t be able to do anything to save you.

Right now, CWD appears limited to deer, moose, and elk. But University of Minnesota researchers warned local lawmakers this week that we should be taking action now to prevent the potential spread to humans. Michael Osterholm, director of the university’s Center for Infectious Disease Research and Prevention, testified that “It is my best professional judgment based on my public health experience and the risk of BSE transmission to humans in the 1980s and 1990s and my extensive review and evaluation of laboratory research studies … that it is probable that human cases of CWD associated with the consumption of contaminated meat will be documented in the years ahead. It is possible that number of human cases will be substantial and will not be isolated events,” according to the Pioneer Press.

Osterholm would know; he’s seen this kind of thing before. For a long time, experts thought another prion disease, bovine spongiform encephalopathy, better known as mad cow disease, couldn’t infect humans. Then they discovered that it actually was possible (though extremely rare) for humans who ate infected meat or came into contact with infected tissue to contract a variant of the human prion disease Creutzfeldt-Jakob. Osterholm was one of the experts who sat on British review panels at the time of the mad cow disease scare, and predicted the prions could make the leap into humans.

This is precisely why researchers are now investigating whether CWD could be transmitted across species lines. Part of that investigation has been to see whether it could infect other mammals, like hamsters and mice. (It definitely can, though it’s not clear by what mechanisms.) Another part is simply looking at cases in which people contract prion diseases—or experience symptoms similar to one—and see whether they’re connected to eating infected meat.

Over the years, the Centers for Disease Control has investigated a number of these cases. In the 1990s, three deer hunters contracted Creutzfeldt-Jakob (known as CJD or vCJD when referring to the variant caught from infected meat) when they were less than 30 years old, which raised concern, because these diseases typically take years to develop and people aren’t often diagnosed when they’re young. In the early 2000s, several more patients turned up with CJD and then several more with vague neurological symptoms that resembled prion diseases. Three men in particular all ate together at regular wild game feasts. Two of them were suspected of having CJD, but one didn’t have any visible signs of a prion disease apart from his rapid neurological deterioration. All of the patients suspected over the years died not long after their symptoms occurred and nearly all of them had eaten meat that they or someone they knew had hunted. But in all of these cases, investigators either found that the meat wasn’t from an area known to be infected with CWD or found no biological connection between their CJD and CWD. Some weren’t even confirmed to have prion diseases.

These may all have been coincidences. After all, CJD rates aren’t any higher in areas with infected deer populations than anywhere else in the United States. But as a 2004 report from the CDC notes, we also don’t know enough about chronic wasting disease or its counterpart Creutzfeldt-Jakob to know for sure. “Because CWD has occurred in a limited geographic area for decades, an adequate number of people may not have been exposed to the CWD agent to result in a clinically recognizable human disease” the report reads. “The level and frequency of human exposure to the CWD agent may increase with the spread of CWD in the United States.”

Chronic wasting disease has been spreading since at least 1981, when it was first identified in wild deer (it had been found in captive deer in the late 1960s). It began in Colorado, but since then has spread to Wyoming, then even farther into the Midwest and Southwest. As of 2019 it’s in 24 states. Most of these locations have low infection rates among local animal populations, but according to the CDC some have rates above 10 or even 25 percent.

As it spreads in one species, a 2012 review in Emerging Infectious Diseases notes, the likelihood of it spreading across species lines goes up. “The potential for interspecies CWD transmission (by cohabitating mammals) will only increase as the disease spreads and CWD prions continue to be shed into the environment,” the study notes. This process of moving within and between species might exert a selective pressure, the authors say, and this might help the prions move across a previously impenetrable barrier.

Though there’s still no concrete evidence that the disease can cross the species boundary into humans, both the CDC and the World Health Organization considers there to be a possibility that it can or one day could. Researchers like Osterholm are calling for a widespread test to be produced so that hunters could determine for themselves whether meat is infected. Right now, testing is expensive and not even available in all states. University of Minnesota researchers are in the process of developing that test right now.

In the meantime, if you hunt (or eat meat that others have hunted for) in one of the infected areas, the CDC doesn’t necessarily say you can’t eat your venison. They do recommend you not eat any animals that look sick or are acting strangely and to minimize touching the organs as much as possible (especially the brain and spinal cord). You can also, in some states, get the meat tested by contacting your local wildlife authority. Beyond that, it’s up to you to decide whether the risk is worth it. This is untrodden territory.