How to find a tablet that works for you

Your ideal device is out there. 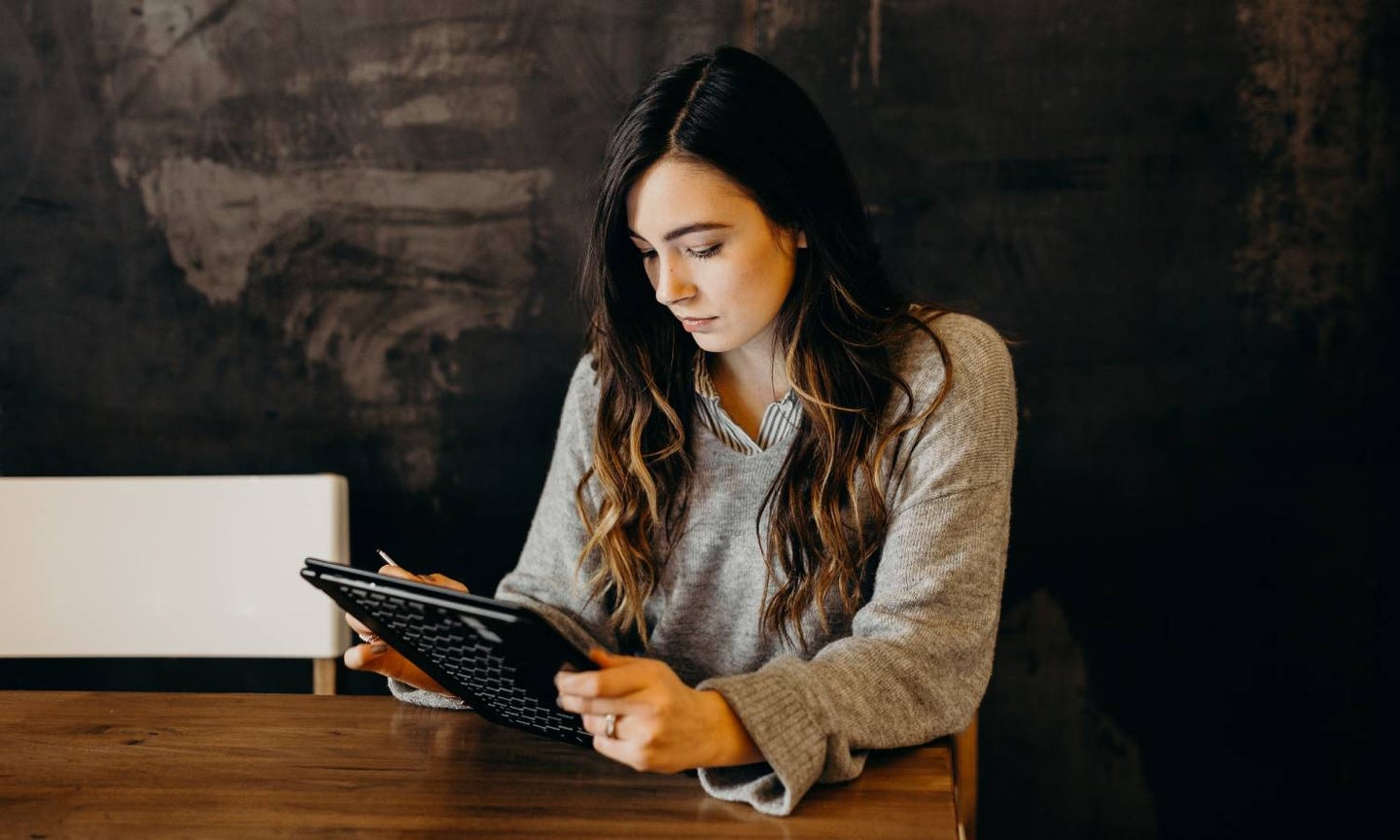 With a few accessories, a tablet can become a sleek laptop alternative. Brooke Cagle / Unsplash
SHARE

Tablets pack all the power of smartphones behind a larger screen, which comes in handy when you’re watching Netflix or reviewing documents on the go. These devices are so versatile that you can even grab a clip-on keyboard and a wireless mouse, and turn your tablet into a light, slim laptop replacement.

In recent years, the market has been flooded with many different kinds of tablets, but the plethora of models can be overwhelming. It may even get in your way when it comes to finding that slab of high-tech magic that best fits your needs.

Knowing your options and the specifications you’ll need to consider will make navigating the tablet jungle easier. And at the end, you’ll be able to find a device that’s perfect for you.

First and foremost, you should think about how big you want your tablet to be. Larger tablets are heavier, so you’ll have to find the right compromise between screen size—ranging roughly from 8 to 13 inches—and portability.

If watching videos is important to you, you may want a device where you can see more details, rather than a lighter tablet that’s easy to carry around. In that case, it’s also important to consider the resolution of the screen, as measured in pixels—a device that packs more pixels into the same screen size will give you a sharper image.

Unless you plan to leave your tablet at home all the time, battery life will also be a crucial consideration. You can start by noting the size of the battery when you review the specs list, but that’s not the only indicator you need to look for. As with overall performance, a lot of other factors influence the length of a battery’s life, including the efficiency of the device as a whole, and the size and brightness of the screen. A good way to get an accurate idea is to check the manufacturer’s quoted battery life and compare it with reviews from users online.

Next, think about the accessories you’ll want to use with your tablet. If you want it to make digital art, make sure your tablet supports one or more styluses. If you want to turn your tablet into a makeshift laptop, check for compatibility with snap-on keyboards. Most tablet manufacturers are now making at least some effort to push their devices as laptop alternatives, so you should definitely be able to find at least a couple of accessories that play nice with the device of your choosing.

As you go through the product’s specifications, you will see references to processor speed (how fast the device makes calculations) and its RAM memory (how much data it can handle at once). Both these specs affect the overall performance of your tablet, but because processing power is hard to parse, they don’t make great benchmarks for comparing one tablet to another. Each manufacturer tends to use a different processor, (or CPU) and give it its own confusing label. This makes it hard to compare tablets from different brands, though it can help to compare different products within the same range and brand—in Apple’s iPad range, for example, the A12 beats the A10.

If you narrow down your choice to two or three tablets, a quick online search should give you some indication of how their processors stack up. Some YouTubers specialize in analyzing similar gadgets and comparing them, so it’s highly likely someone already did the homework for you.

More RAM is always better, but keep in mind that it’s not the only factor that affects performance. The quality of the components and the efficiency of the internal engineering also affect a tablet’s speed. So while we’d suggest making a note of the CPU and RAM specs, don’t give them too much weight in your final decision. The price of the tablet is usually a good indicator of whether you’re getting a speedy or sluggish device. And of course, online reviews can always help.

Like laptops, tablets come with one of three primary operating systems. In fact, picking which one you prefer will be one of the biggest decisions you make while choosing your device. We won’t go into a full blow-by-blow comparison here, but here are some of the key points for you to keep in mind.

Apple continues to push the iPad as a serious proposition for on-the-go computing, and even gave its signature tablet its own operating system. Called iPad OS, it includes features such as a Mac-style dock, better app switching, and support for a mouse or trackpad. It is certainly a slick and polished choice, but it works best with other Apple hardware and software, as most Apple gadgets do. If you’re already invested in the company’s ecosystem (meaning your computer is a Mac and you have an iPhone and other Apple devices), going for an iPad is a logical choice.

Even Google would admit that Android works better on smartphones than tablets. Many apps, such as the Microsoft Office and Google suites, work fine on the larger devices, but compared to iPadOS, Android tends to have fewer apps specifically geared toward tablet use. This is slowly improving though, and you’ll usually be able to find apps optimized for tablets in the Google Play Store. Going for an Android tablet is a good choice if you want to use it with a broader range of devices or feel uncomfortable getting locked into the Apple ecosystem.

Windows may have been a casualty in the smartphone battle, but the system is pretty much alive in the tablet realm. Microsoft developed Windows 10 to work as an operating system that runs on desktops, laptops, and tablets alike, so, unlike iOS and Android, you’re essentially getting a full desktop experience on a tablet. Microsoft’s OS is well worth considering for a tablet, especially if you have some serious computing to do on the move.

Once you’ve chosen an operating system, you can dig deeper into the specific hardware options for each one.

With Apple, you’ve got no fewer than five iPads to pick from—the entry-level 10.2-inch iPad, the slightly faster 7.9-inch iPad Mini and 10.5-inch iPad Air, and the faster still 11-inch and 12.9-inch iPad Pros. The Pro screens have extra abilities like adjusting white balance and refresh rates based on the room lighting and the viewed content.

All these models come in a variety of configurations in regards to on-board storage and whether or not you want the LTE option. Prices vary a lot too—from $329 for the Wi-Fi-only 32GB 10.2-inch iPad, to $1,649 for the Wi-Fi and LTE 1TB 12.9-inch iPad Pro. All iPads run the same iPadOS and support stylus and keyboard inputs.

Over on the Android side of the fence, you can choose between premium and more budget-minded options. On the high end, Samsung’s 10.5-inch Galaxy Tab S6 is about the best bet right now. It starts at $450—a lot cheaper than Apple’s highest tier—but just as with the iPad, your final price may change depending on storage size and accessory choices.

If you’re on a budget, you still have plenty of Android tablet options—just check a few reviews first to make sure you avoid buying a tablet that grinds to a halt after a couple of months. We like the 10.1-inch Lenovo Smart Tab M10 ($148 on Amazon) and the 10-inch Dragon Touch K10 ($120 on Amazon). You can also save serious money with the Amazon Fire range—the 8-inch Fire HD 8 tablet is just $95 on Amazon— but Fire users have to limit their app-shopping to Amazon’s smaller Android app store instead of the full Google Play Store.

Windows 10 lovers also have a wealth of options to pick from. Start your comparison shopping with Microsoft’s own 12.3-inch Surface Pro 7 ($900 on Amazon) or the smaller, less powerful, more affordable 10-inch Surface Go (from $390). Finally, compare the specs and options to the Windows 10 offerings from other manufacturers.

Other options include the premium 12.3-inch HP Elite X2 ($1,000 on Amazon) or the more affordable 11.6-inch Chuwi UBook ($350 on Amazon). Samsung, Dell, Acer, and HP also sell their own ranges of Windows 10 tablets (or 2-in-1 laptops that fold over to double up as tablets). When browsing through these options, remember to factor accessory costs into your price comparisons, since many Windows 10 devices come with a keyboard or stylus included.