Head-up display systems have been around for decades but despite their added safety (by allowing you to keep your eyes... 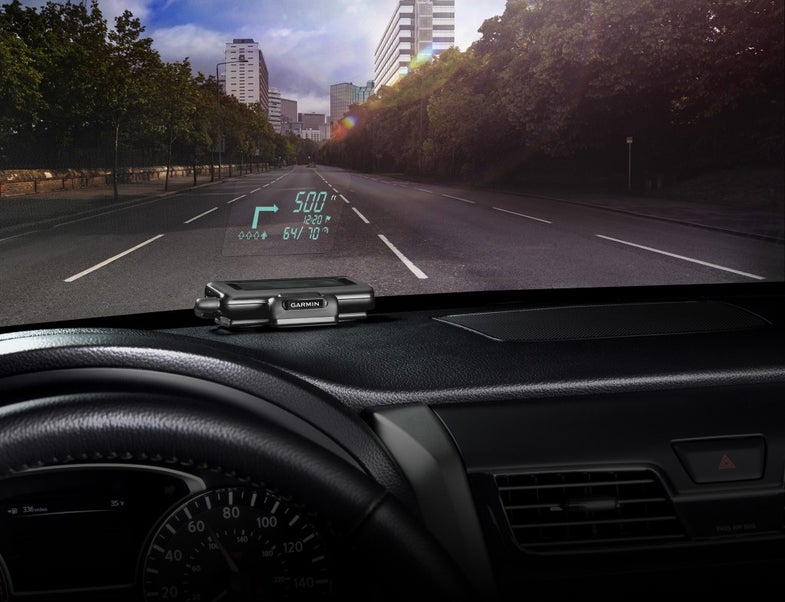 Head-up display systems have been around for decades but despite their added safety (by allowing you to keep your eyes on the road) you still won’t find it a standard feature in many cars. If you’ve bought a car and discovered that it didn’t have a head-up display, there are a growing number of affordable aftermarket kits available.

Navigation specialist Garmin is the latest to release a simple head-up display system, which is portable so can be used in multiple cars.

The Garmin unit receives navigation information from a Bluetooth-enabled smartphone running a Garmin StreetPilot1 or NAVIGON app. By attaching it to your vehicle’s dash, this information can be projected onto a transparent film on the windshield or an attached reflector lens. The brightness is automatically adjusted depending on ambient conditions so projections are clearly visible in direct sunlight or at night.

Garmin boasts that its head-up display offers more navigation details than other portable head-up displays, yet presents them in a simplified way that doesn’t divert the driver’s attention from the road. The information includes turn arrows, distance to the next turn, current speed and speed limit, as well as estimated time of arrival. It even lets drivers know what lane to be in for the next maneuver and alerts them when they exceed the speed limit. It also warns users of potential traffic delays and upcoming safety camera locations.

The Garmin head-up display is priced at $129.99, though you’ll also need to download either the Garmin StreetPilot1 or NAVIGON app, which start at $29.99.