Can the All-Electric Ford Focus Get Traction?

Later this year, Ford will roll out the Focus Electric, Detroit’s first direct competitor to the Nissan Leaf. Like the... 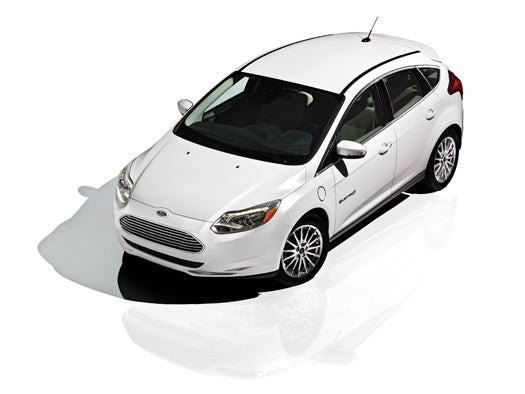 2012 Ford Focus Electric: Focus Electric not only is designed to provide outstanding energy efficiency and reliable operation, it also delivers real driving enjoyment. Much of the Focus Electric's steering, handling and braking feel is shared with the agile, sporty, fuel-powered five-door hatchback Focus model upon which it's based. (12/14/2011). Ford
SHARE

We spent an afternoon in New York assessing the Focus Electric’s highway acceleration, hill-climbing power and agility while weaving through dense city traffic.

The Focus accelerates quickly, grips the road firmly, and handles precisely even on sharp, fast turns that would shake the less-sporty Leaf. The interior is equipped with plush, finely grained seats that are a major upgrade over the Leaf’s entry-level upholstery, and the cabin is nearly silent. Because Ford installed a 6.6-kilowatt onboard charger, the Focus charges twice as fast as the Leaf. But unlike its gas-powered, best-selling brethren, the Focus Electric is far from a mass-market car. Analysts expect Ford to build no more than 2,500 Focus Electrics in the first year—just enough to comply with zero-emissions regulations in California. (In contrast, Nissan could build as many as 60,000 Leafs this year.) It’s priced like a boutique item, too. The Focus Electric starts at $39,200: $4,000 more than the Leaf and $20,900 more than a gas-powered Focus. In fact, the biggest problem with the Focus Electric is how hard Ford has made it to buy one.