At the Imagine Cup 2012: A Real-Life Minesweeper App That Detects Buried Landmines

Using both the military and software sides of their education, a team of Polish military students studying computer engineering at... 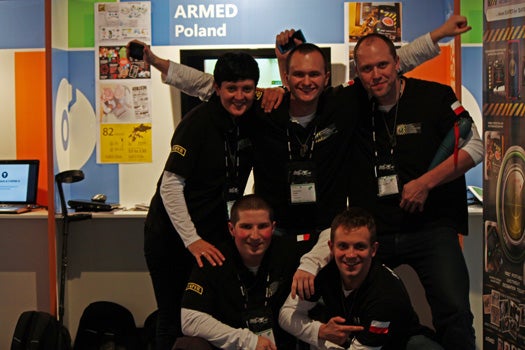 Using both the military and software sides of their education, a team of Polish military students studying computer engineering at Wojskowa Akademia Techniczna (Military University of Technology) presented at the Imagine Cup here in Sydney an app that uses the built-in magnetometer in a Windows phone to detect the magnetic signature of land mines buried in the ground.

SAPER (Sensor Amplified Perception for Explosives Recognition) is Poland’s entry in the software design category of the 2012 Imagine Cup.

It’s like a high-stakes Minesweeper with real-world results. The corresponding web application shows the locations of mines users have already detected, or whose known locations were input by military professionals. Then, if you enter a dangerous area, the app sends you a notification on your phone.

SAPER has 75 percent accuracy in detecting land mines, and works from 30 centimeters away. However, both of these stats can be improved by purchasing their external, more powerful magnetometer/metal detector, for “premium users,” which the team says makes the app comparable in accuracy to current military tools. Being from a military academy, Team ARMED had access to a field test site, where they buried mines in the ground and tested their app on them.

The team hopes to first deploy their app in the most affected areas, such as Afghanistan, Cambodia, Vietnam and Croatia, where, team mentor Mariusz Chmielewski tells me, there are regularly “bombs on the side of the road you are driving on. It is a big, big problem.”