Italian looks, German engineering and American electrics. Zero to 60 in five seconds, scissor doors, and you'll even get some change back from a $100,000 bill 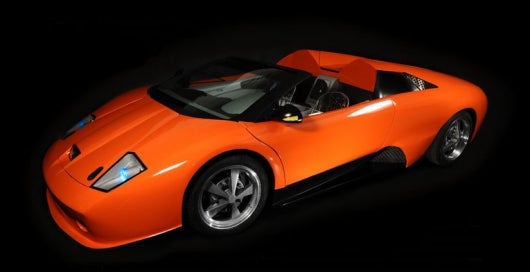 For around 13 grand, Electric Cars of Springfield (ECOS) will turn your old beater into an all-electric commuter car. But for a few bucks (around $77,000) more, they’ll build you an entire, turn-key sports car. It’s called the Harbinger. It hits an electronically limited 117 miles per hour, gets to 60 mph in five seconds and undercuts the Tesla roadster on price. Did I mention it comes with Lamborghini-style scissor doors?

ECOS says it’s taking orders on the Harbinger, which also comes with a new, touchscreen EV monitoring system providing real-time info on power consumption as well as GPS navigation, stereo and wireless internet. The Italian-supercar look comes by way of a carbon-kevlar composite body over a German-engineered aluminum frame. Power comes from an 11″ diameter Netgain DC motor and 30kW battery pack, which enables a 150-mile range, if you can refrain from racing tuned Civics between stoplights.

The company says it’s taking reservations on a limited run of Harbinger models at a base price is $89,995. Production is scheduled to start in February 2010, and you can even follow ECOS’s progress from aftermarket supplier to full-on sports-car builder on Twitter.