Steaming Down the Road 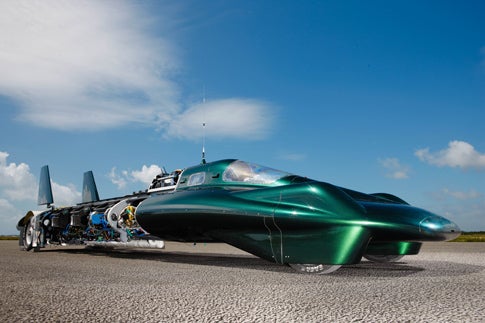 Ten years of toil for a ride lasting less than two minutes — that’s the trade a team of Britain’s finest engineers, mechanics and speed junkies have made for a chance to break the century-old speed record for a steam-powered vehicle. Using propane to turn 10 gallons of water a minute into superheated steam, they expect their 25-foot-long Steam Car to top out at 170, shattering the record by more than 40 mph.

The pet project of auto aficionado and British nobleman Edward Montagu, the machine was built from a mishmash of donated, salvaged and new or custom-fabricated parts that seemingly have no place working together: steam valves from a nearby power station, a fire engine’s water pump, heating elements from tea kettles. The group also designed 12 suitcase-size stainless-steel micro-boilers, where a mixture of propane gas and air flows in and ignites at temperatures nearing 2,000ºF, generating a whopping three megawatts of heat. “We couldn’t just pick a boiler design out of a book. It didn’t exist,” says lead engineer Matt Candy. “We had to create it.”

At press time, the Steam Car team had yet to give it a full test run, holding off until trying for the record at Utah’s Bonneville Salt Flats in September. Why wait? Because the Flats are one of the only places in the world with a smooth, unobstructed surface that’s long enough: The 360-horsepower car needs a full three miles to get up to speed before it makes the mile-long record run, and another three to slow down. 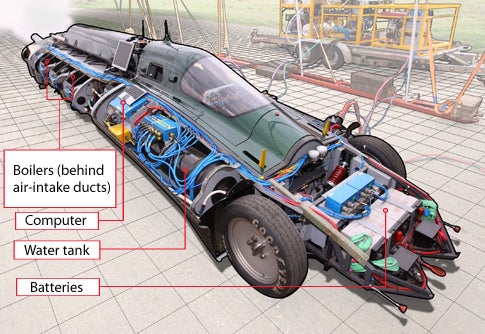 Inside the Steam Car

Boilers
Twelve stainless-steel boilers are arranged in sets of four, linked by piping. Compressed-air-powered hydraulics inject water (from external tanks at start-up and onboard tanks at high speed) into the boilers’ nearly two miles of burning-hot steel piping, which ranges in diameter from 2 to 22 millimeters. The boilers heat the water in three stages: first to 158°F, then to 482°, vaporizing it into wet steam, and finally to 752°, superheating it into dry steam. The boilers — lined with ceramic and silica-cloth insulation to prevent the heat from melting everything — also pressurize the steam to 40 times ambient air pressure. 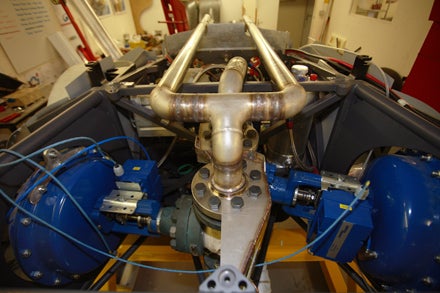 Turbine
The blue industrial valves on either side of the turbine act as throttles, forcing the steam through the turbine at supersonic speed. To hit the 170mph target, the two-stage turbine must reach 13,000 rpm and generate 360 horsepower. 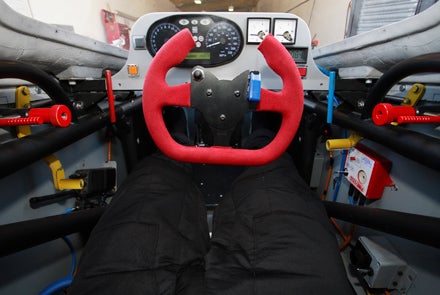 The Driver’s Perspective of the Cockpit

Cockpit
The team fabricated the chassis out of steel tubing but custom-molded the cockpit hull out of heat-resistant carbon fiber for added strength and safety. Inside, driver Charles Burnett III will monitor the speedometer, rev counter, and temperature and pressure gauges, as well as a series of warning lights wired to the 192 onboard sensors — all while attempting to set a world record.