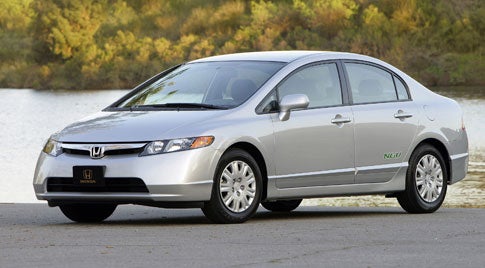 We reported last week on how feebly powered, fuel-sipping 1990s-vintage hatchbacks have been lighting up the used car market recently due to skyrocketing gas prices. In an interesting twist to this phenomenon, I actually benefited myself somewhat from this hysteria when I had to sell my beloved natural-gas-powered 2006 Honda Civic GX last week on eBay, turning it into one of the smarter investments I made all year.

You may remember this car from a long-term evaluation PopSci did in 2006-2007 to test the viability of a natural-gas vehicle in daily driving. We also evaluated the Phill home refueling station that taps into your natural gas line to fuel the car overnight. We praised the car’s environmental benefits and its low fuel costs—about $1.20-$1.40 per gallon.

Coincidentally, the end of the evaluation period happened to coincide with the introduction of a 65-mile daily commute (each way) into my life. With gas prices through the roof, my wife and I bought the Honda, and I’ve been driving it ever since.

Until, that is, we decided to take back those two hours of family time and move closer to work to eliminate the commute. Sadly our new house doesn’t have natural gas, so without an at-home fueling station, the Honda had to go. I did some research, and found that compressed-natural-gas vehicles are fetching big premiums online in places like Utah and Oklahoma where natural-gas prices are ridiculously low—as low as 60-cents per gallon. When I listed the car on eBay, it sold three days later to someone in Oklahoma for $18,600, about $4,000 more than what I paid for the car when I purchased it from Honda less than a year before, and $2,000 above its Kelley Blue Book value. (The sale price to me reflected various state and federal tax incentives that Honda took when they owned it.)

Who’d have thought that the highest-performing investment of my entire year would be a used Honda Civic? We loved owning the car, and will miss its greenest-car-on-earth cache. But we realized that living five miles from work is probably better for the environment than living 65 miles from work, no matter what you drive.