Liquor Does It Quicker

Saabâ€™s BioPower engine gives ethanol a kick in the pants 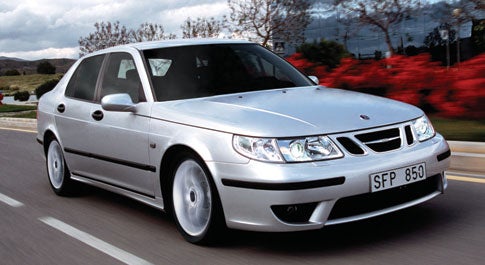 With all the buzz about hybrids, it´s easy to ignore our homegrown alternative fuel: ethanol. Clean-burning and infinitely renewable-we´re talking grain alcohol-ethanol is dear to environmentalists and economists alike. The standard 85/15-percent ethanol/gasoline blend (E85) is widely used in Sweden, but there are only 313 E85 fueling stations in the U.S. And motorheads aren´t clamoring for more, because E85 typically delivers inferior fuel economy; it has about 75 percent of the potential energy of gasoline, so it takes up to 20 percent more hooch to keep horsepower on par. But E85 also has a high octane rating (around 110), and Saab realized that a turbocharger could harness it. Turbos push extra air into the cylinder, and higher octane allows a fuel to better endure the increased pressure.
So Saab cranked up its fans and created the BioPower engine, the first commercially available ethanol turbo. A computer samples the fuel mixture and adjusts boost pressure-from 5.8 psi for pure gasoline to 13.8 psi for E85. Running straight gasoline, the engine produces 148 horsepower, but E85 jacks it up to 184, with no penalty in fuel economy.

THE NUMBERS THAT COUNT**

Average price per gallon in the U.S.*

Corn used for fuel produces about:

Effect of federal taxes on Ethanol in cents per gallon
-51.0

Effect o federal taxes on gas, in cents per gallon
+18.4