Via BoingBoing I discovered this intriguing tale (ahem, sorry) of a man with a 37cm “tail” in Banharat, West Bengal.... 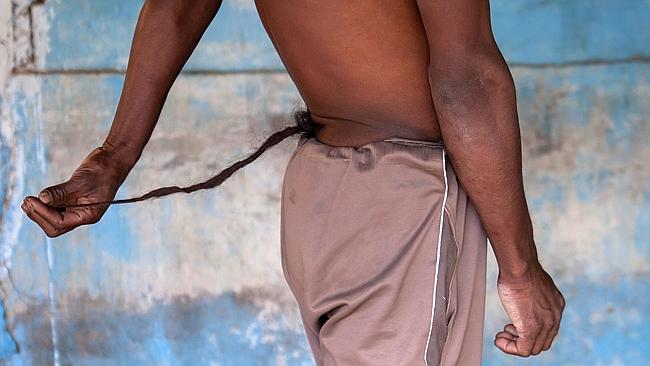 Via BoingBoing I discovered this intriguing tale (ahem, sorry) of a man with a 37cm “tail” in Banharat, West Bengal. 27-year old (or possibly 35-year old, according to various sources) Chandre Oraon claims to be an incarnation of Hanuman, a Hindu monkey god revered for his strength and devotion. According to devotees, Oraon can climb trees very quickly, he likes bananas, and of course he has a tail. Quod erat demonstrandum.

A hunger for bananas isn’t exactly what inspires a following, though, so of course Oraon is also said to have healing powers. People wait for hours just to get the chance to touch his tail.

Photos of Oraon show that the “tail” emerges from the middle of his back, which is curious since every other tailed vertebrate, including humans, sport their tails at the coccyx. Oraon’s tail also appears to be made primarily of hair, though reports state that there’s a fleshy bit in there, too.

Boring old doctors suggest that Oraon has spina bifida, a condition in which the spine doesn’t fuse during development, sometimes allowing the spine to protrude from the back. I’ll trust the Indian doctors since I am neither in India nor a doctor, but from the photos it really doesn’t even look like there’s a protuberance – just a long, nasty clump of hair that may or may not be glued to his back.

All that said, I’ve noticed that BoingBoing and other media outlets have seemingly buried the lede. From news.com.au:

It’s bad enough that women are regularly used and traded as chattel, but this particular woman was sold off to a man who pretends he’s a god because he has a foot of stringy hair hanging off his lower back. The collision of patriarchy and superstition turns this from a bizarre oddity into a tragedy.