Bill Nye Wants You To Fund This Solar Sail Spacecraft

Will it be smooth sailing for LightSail? 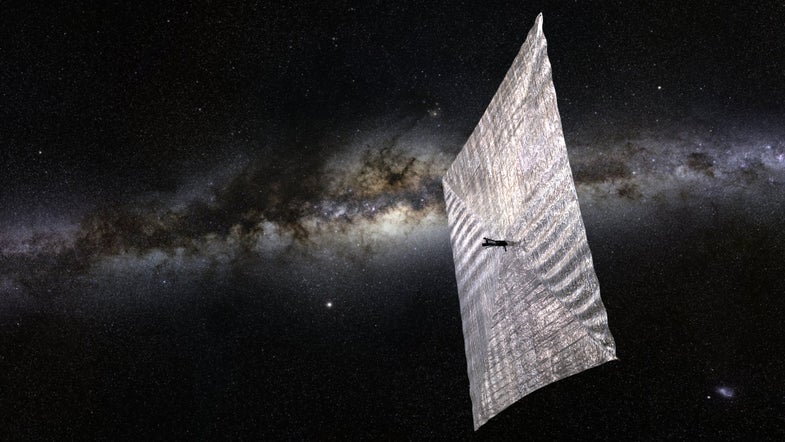 The Planetary Society is about to bring one of Carl Sagan’s dreams to life. On May 20, the non-profit scientific organization–run by “Science Guy” Bill Nye–will be sending their LightSail spacecraft into lower Earth orbit for a 30-day test run. LightSail is essentially what it sounds like: a large sail that runs on sunlight. For this test, the Planetary Society will send up a tiny CubeSat that will deploy 32 meters2 of Mylar, and this “solar sail” can theoretically use renewable energy from the sun to propel the satellite through space.

It’s a concept that Sagan famously promoted once on The Tonight Show with Johnny Carson. And now you can be directly involved.

Today, Bill Nye launched a Kickstarter campaign to help gather funds for the project. While the May 20 test of the LightSail prototype is good to go, the CubeSat won’t be sailing on this trip. The test is merely to see if the sail can deploy. The Planetary Society sill needs money for their primary mission in fall 2016, when they will launch the CubeSat high enough into space for some sun sailing.

According to the organization, the entire LightSail project has a price tag of $5.45 million. Most of that has already been taken care of through private backing, but Nye says they still need $1.2 million. The Kickstarter campaign is only asking for a small $200,000 of that, and it looks like they’ll reach their goal with ease. Right now, more than $130,000 has been pledged.

Learn more about the project in the video below: