When Cosmopolitan Sent A Victorian Lady To Race Around The Globe

She competed against legendary circumnavigator Nellie Bly. Both efforts were inspired by Jules Verne's Around the World in 80 Days. 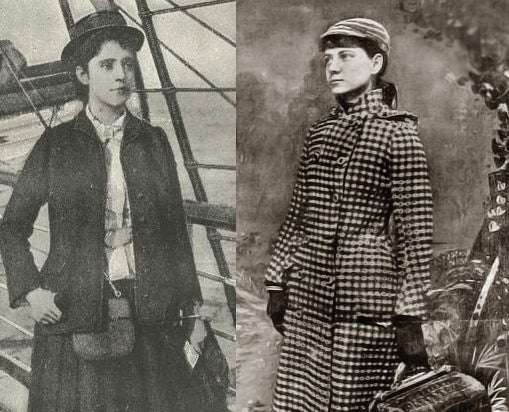 Bisland (left) and Bly (right) in their travel gear, in photos taken to publicize their race. Both photos are from the New York Public Library Archives
SHARE

Sixteen years after Jules Verne first published Around the World in 80 Days, two American journalists raced to do just that. The Public Domain Review has the story, which is just about as charming as the Verne novel. The two women set off 124 years ago this month.

Nellie Bly, investigative journalist for the newspaper New York World, was the first to come up with the idea. She pitched it to her editors, then had to fight to go—her superiors originally wanted to send a man. After she’d set off, the editor of the monthly magazine The Cosmopolitan decided Cosmo* could get a lot of “pageviews” by sending a rival, preferably a young woman, to race Bly. So Cosmo recruited book reviews writer Elizabeth Bisland to go, starting in the opposite direction as Bly. The Public Domain Review tells the story mostly from the point of view of Bisland, who would eventually lose the race, circumnavigating the globe in 76 days to Bly’s 75. I know, who wants to read about a loser? But this is cool because Bisland has never had as much written about her as Bly has. I’m a fan of circumnavigation efforts, and I never knew Bly had a rival. The author of The Public Domain Review article has also written a book about the two.

The Public Domain Review highlights works that are in the public domain, meaning their copyright no longer applies and people may view them and use them for free. Its Bly-Bisland article links to books and essays Bisland wrote throughout her life, including her descriptions of her trip. There are also contemporary photographs of ports she visited, as well as some weird anecdotes about how men at the time thought she was super hot. One writer called her “a sort of goddess,” while another said she was “a beautiful dangerous leopard.” A leopard? We just think she and Bly were really impressive. It can’t have been comfortable to circumnavigate in the Victorian era.

It’s always exciting to see real life echo science fiction… and here’s a moment when that happened, more than a century ago.

*Yes, this is the magazine that would eventually become the fount of please-your-man-tips you know today.