One Step Closer To Dark Matter

The dark universe is out there--and today scientists got a little closer to finding it. 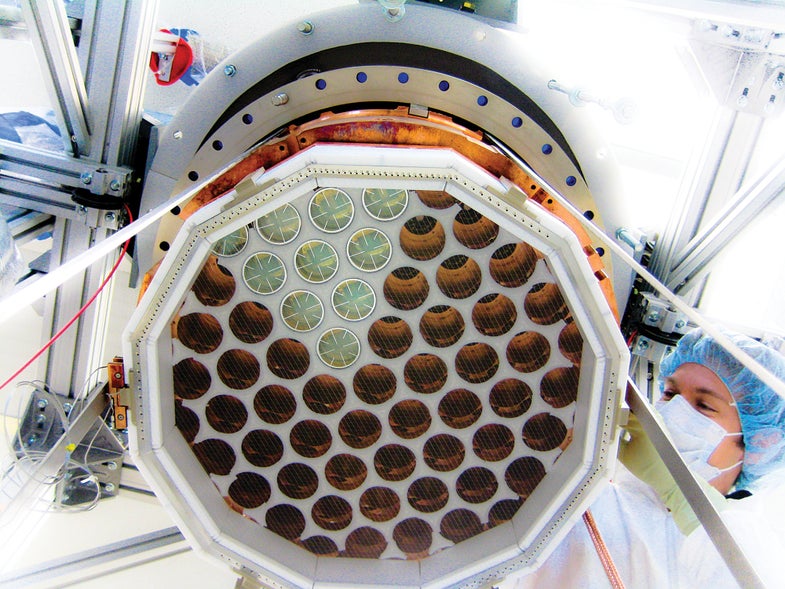 Evidence has been building for decades that most of the matter in deep space is invisible. The gravitational pull of unseen dark matter bends light from distant regions of the cosmos. It keeps galaxies like our own Milky Way from flying apart, and clusters of galaxies from dispersing out into the void. Without dark matter, there would not have been enough gravity to form galaxies in the first place. Based on all those lines of evidence, the dark stuff must outweigh visible matter 6 to 1. But its true nature remains a mystery, because nobody has been able to detect it directly.

The new LUX detector, situated 4,850 down in an abandoned gold mine in South Dakota, is designed to bring dark matter into view. At a seminar today, physicists Rick Gaitskell of Brown University and Dan McKinsey presented results from the first full run of their experiment. They haven’t found dark matter yet–nobody dared to hope it would be so easy–but the results are a major advance all the same. After just three months of operation, the two-story-tall LUX detector has achieved 3 to 20 times the sensitivity of any other dark matter experiment.

Those LUX results cast serious doubts on other, controversial claims by competing teams who say they’ve seen evidence of dark matter particles crashing into ordinary atoms. If those results were correct, the more sensitive LUX would see a veritable barrage of dark collisions–but no go. A bummer, in some ways, but LUX is now sweeping away a decade of uncertainty and leading by far the best search ever for the dark universe. Over the next year LUX will continue to collect data, getting a better and better view of what is out there.

If LUX can’t do the job, Gaitskell and company are already thinking about the next step: An upsized version of LUX called, in rock and roll fashion, LUX-ZEPLIN. So when will the real dark matter discovery come? Gaitskell refuses to take the bait. “It wouldn’t be science if you had guarantees, and frankly it would be rather dull,” he says. “But one doesn’t pursue something if it’s a lost cause.”

Read Inside The Hunt For Dark Matter from our November issue, in which Corey Powell goes deep inside the Large Underground Xenon dark matter detector.