A Geek’s Guide to Colleges

Where to go if you want to clone mules, hunt aliens, or just build a better videogame 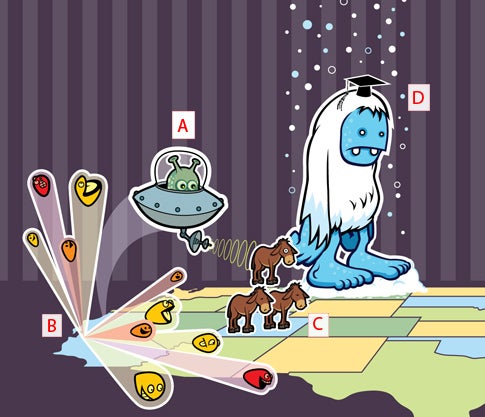 **University of California at Berkeley
Where: Berkeley, Calif.
Department: Search for Extraterrestrial Intelligence (SETI)
**
SETI@home taps the power of thousands of ordinary PCs over the Web to create, in effect, one of the most powerful supercomputers anywhere. It analyzes data from radio telescopes looking for signals from intelligent life. Berkeley students help improve the search algorithms and refine the software that ties all the computers together.

**Utah State University
Where: Logan, Utah
Department: Center for Integrated BioSystems
**
In 2003, scientists at Utah State were the first in the world to clone a hybrid animal—a mule, the typically sterile offspring of a donkey and a horse. The research ultimately spawned commercial equine-cloning labs. Now students and faculty churn out up to 600 cloned embryos a week, primarily for genetics research.
biosystems.usu.edu

**Montana State University
Where: Bozeman, Mont.
Department: Subzero Science and Engineering Laboratory
**
This fall, students will step into a –80°F laboratory to study stuff in deep freeze. One project will look for life in 250,000-year-old ice cores taken from two miles underneath the Antarctic. Others will study the best way to keep winter roads ice-free, and research the flow of snow to better predict avalanches.
www.coe.montana.edu 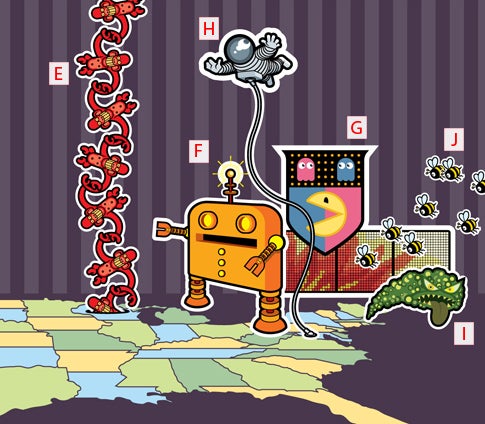 **Cornell University
Where: Ithaca, N.Y.
Department: Game Design Initiative
**
At the first Ivy League school to offer a minor in game design, students take classes like “Foundations of Artificial Intelligence” and “Computer Animation.” The final project: building their own game. (The school’s design software keeps code-writing to a minimum.) Alumni have worked on blockbusters like The Sims and Spore.
gdiac.cis.cornell.edu

**University of Maryland
Where: College Park, Md.
Department: Space Systems Laboratory
**
Don a space suit and climb into a neutral buoyancy tank to conduct low- and zero-gravity tests on next-gen astronaut gear, as well as space- and deep-sea-bound robots. Maryland’s 50-foot-diameter, 367,000-gallon tank is one of only two in the U.S., and the only one at a university.
ssl.umd.edu

**Boston University
Where: Boston, Mass.
Department: Emerging Infectious Diseases Laboratory
**
BU’s new biosafety-level-4 facility, opening this year, will be one of only a handful of labs where researchers can study contagious killers like smallpox and Ebola. Undergrads won’t log time in the full-body suits, but they will conduct pathogen research in state-of-the-art labs and learn from top infectious-disease scientists.
bu.edu/dbin/neidl/en