Mars One To Build Simulated Colony For One-Way Astronauts

People selected to live on the Red Planet will train inside an earthbound outpost. If they don't go crazy, they just might make the real trip. 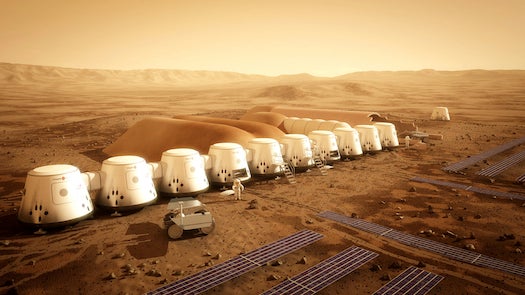 Creating a permanent human settlement on Mars by 2025 will require serious training. To prepare its future astronauts for the task, the Netherlands-based private spaceflight project Mars One announced today its plans to construct Earth-based outposts that replicate the cramped, isolated, crazy-making conditions of a Red Planet colony.

In an email statement this morning, Mars One also named Kristian von Bengston—co-founder of Copenhagen Suborbitals, a private effort to build and launch a crewed suborbital rocket—as leader of the new effort to establish multiple training outposts at yet-to-be-determined locations. For now Von Bengston is seeking out construction companies and courting financial sponsors. The first simulated colonies won’t contain actual life-support systems, at least to begin with, but they will be retrofitted with the technology later on, according to the statement.

More than 200,000 people applied for the one-way mission. Late last year, Mars One narrowed the selection pool to 1,058. Their ultimate goal: select 24 to 40 candidates who will travel to Mars in groups of four (two men and two women, ideally from four different continents, says CEO Bas Lansdorp). Mars One wants to send the first group in 2025, with the subsequent crews launching one at a time, every two years thereafter. The organization intends to televise the final rounds of the search.

Spaceflight contractors Lockheed Martin and Surrey Satellite Technology Ltd. are already working with Mars One to develop a robotic lander and a data-link satellite for an unmanned, exploratory mission to Mars in 2018. Should this initial mission get off the ground, it would test several technologies required to support human life on another world.

Last August, Popular Science spoke with one of the applicants, video game designer Katrina Wolfe, who has since made it to round two of the selection process. Read our interview with Wolfe here.