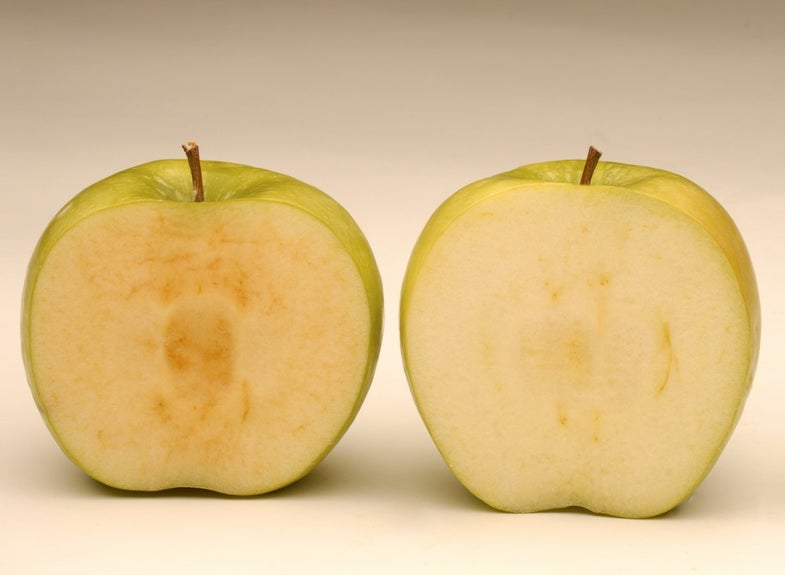 The U.S. Department of Agriculture approved the country’s first genetically modified apples for sale this Friday. The apples are dosed with extra copies of apple genes so that their flesh stays whiter longer after they have been sliced. The apples’ maker, a small company called Okanagan Specialty Fruits, has named the apples “Arctic” and plans to sell Arctic versions of Golden Delicious and Granny Smith apples.

This approval has been in the works for a while. Throughout 2014, experts kept thinking it was imminent. In fact, it was a bit of a surprise that GMO potatoes–another first–garnered USDA approval before the apples did. Both the apples and the potatoes use a similar, newer GMO technology. Compared to older methods, the new tech is more precise. It also uses genes taken from related plants so that the GMO potato has added genes from domestic and wild potatoes, while the GMO apple has added apple genes. You can read more about how the technique works here.

USDA approval means the agency has determined Arctic apple trees are safe for other crops. However, the USDA doesn’t assess whether GMOs are safe for people to eat; that’s the Food and Drug Administration’s job. Okanagan has submitted Arctic apples for FDA safety testing voluntarily, and the FDA is still working on those tests, the Wall Street Journal reports. The GMO potato is already FDA-approved. But GMO crop companies often don’t need such testing before selling their wares. The FDA treats GMO crops as “generally recognized as safe” and that’s the case for Arctic apples.

The first few GMO apples may appear in stores in 2017, according to the Wall Street Journal. Okanagan Specialty Fruits says it plans to put snowflake symbols on the apples’ labels to distinguish them from non-modified fruits.