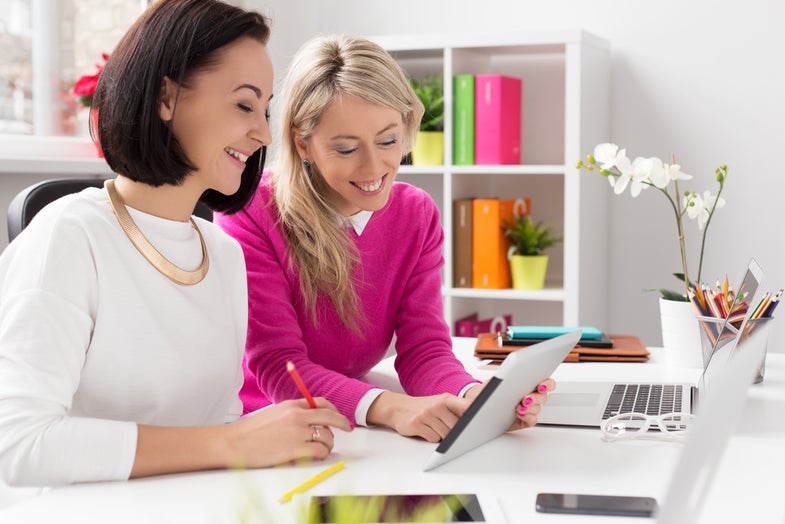 The stats on women in tech are bleak. In 2017, female founders received only 2 percent of venture capital funding, which is often an essential component of startup growth and success. While women’s unique perspective can drive innovation in fields men might otherwise ignore (just look at PopSci‘s coverage on the incredible, inventive Heist tights), their perspective is often ignored in Silicon Valley, a male-dominated industry where male partners in venture capital funds outnumber women partners 16 to 1. And startups focused on mothers, for example, have consistently struggled to get funding, despite clear demand for things like smarter and more comfortable breast pumps.

But there appears to be one haven for women in tech looking for investors: crowdfunding sites like Kickstarter and Indiegogo. On these platforms, which allow entrepreneurs to make their case directly to potential customers, women are more successful than men at meeting their funding goal. Ethan Mollick, an associate professor of management in the University of Pennsylvania’s Wharton School and an expert in the intersection of gender and crowdfunding, has spent years analyzing crowdfunding data to figure out why. He says it all comes down to the sense of connection a crowdfunding campaign can foster.

Crowdfunding can take a few distinct routes. Equity funding allows people to give money in exchange for a percentage of the company and its future profits. Donations-based funding means people give money without the expectation of getting anything in return, simply because they believe in your artistic or entrepreneurial vision. (The “crowd” in this case is usually your close friends or your grandma). And then there’s reward-based crowdfunding, the most popular crowdfunding flavor, which is seen on Kickstarter and Indiegogo. In these circumstances, people invest small amounts of money in exchange for some kind of future reward, like an all-weather wool coat or a collapsible sippy cup.

As a result, the companies most likely to succeed on these platforms have some kind of reward to offer. “Crowdfunding works really well when it’s consumer-oriented, when it’s a thing you get, and where there are already existing communities,” Mollick says. Entrepreneurs have unprecedented success with crowdfunding board games, for example. There’s a big market full of passionate people, Mollick says, and they fund you not only because they believe in you, but because their reward is a new board game.

Consumer hardware companies have found success on Kickstarter and Indiegogo for similar reasons. Gadget geeks and gear heads are always seeking out the next big thing, and crowdfunding sites, which typically feature new products when they’re very new or still prototypes, allow for easy innovation hunting. It’s in these traditionally male-dominated spaces like tech that female crowdfunding campaigns succeed.

“Women were outperforming men when they were the least represented, like in video games and technology projects,” Mollick says. But by just how much? “All things being equal, a woman and a man trying to raise the same amount of money for the same project, a woman is 13 percent more likely to be successful,” he says. In technology, Mollick also found women-led campaigns met their fundraising goals 65 percent of the time, compared to 30 percent success rates for men. This, despite the fact that at the time of the study, women accounted for only 10 percent of technology campaigns on Kickstarter.

With the centrality of gender confirmed, Mollick turned his attention from the company founders to the crowdfunders who supported them. Who was investing so heavily in female entrepreneurs? It turned out it was other women who were driven by a special kind of solidarity, which Mollick termed “activist-driven homophily”.

Homophily is a short way of saying “birds of a feather flock together.” Through experiments and observational research, Mollick found that women funders identified with women founders more than they did with male founders, because they valued their similarities. But homophily wasn’t enough to get just anyone to invest a bit of their hard-earned money in a crowdfunding campaign. That’s where the activism came in. “One-third [of women Kickstarter investors] were more likely to view the women as better—and give money to those women,” Mollick says. In other words, a relatively small group of activism-oriented women made a tangible difference in the crowdfunding success of female entrepreneurs, especially those trying to succeed in male-dominated fields.

Crowdfunding is far from a silver bullet for gender disparities in tech, of course. It doesn’t typically work for businesses without tangible rewards to offer, like software companies. And, more importantly, it can’t make up for other funding sources, like venture capital funds (also called “VCs”) once production gets rolling. But for many female entrepreneurs, crowdfunding has proven indispensable.

Elin Elkehag is the founder of Stilla Motion, which produces an alarm that, when activated, sends an alert to your phone if your bag is moving when it shouldn’t be. When Elkehag first started her company, she used Indiegogo to raise money and prove to investors (and herself) that a market for this product existed. In just 100 days, she tested dozens of different versions of the device, and solicited in-person feedback from friends and family members. Finally, she put Stilla online, and hoped for some funding to roll in. “We reached our goal in 10 hours,” she says.

While Indiegogo allowed her to get her company off the ground, Elkehag couldn’t have built Stilla with her crowdfunding dollars alone. As she refined the product and grew the business, Elkehag eventually needed venture capital funding, which comes from investors who seek to fund startups in exchange for equity in the company, or some other backing.

Elkehag said that formulating her Indiegogo campaign was a breeze because she believed in the product and was able to communicate directly to consumers. She knew she could reach women who might be dreaming for a solution to the common problem of handbag loss or theft. But Elkehag found that pitching her idea to the venture capital funds was totally different, given VCs didn’t just want a good idea, but assurances of future success. “I prefer to underpromise and overdeliver. I wanted to know that I could actually keep my promises,” she says.

Though Elkehag was ultimately able to raise an additional funds, when pitching VCs she experienced exactly what Mollick’s data might have predicted: The opposite of homophily. While crowdfunding can expose thousands of people to your product—some of whom will inevitably be activist-driven funders—most venture capital funds consist of small groups of men. And, research shows, many of these male venture capitalists have implicit biases against women, thinking that women aren’t as tenacious or that their companies are likely to underperform.

“You need to learn to play the game if you want to go after the VC money. But Indiegogo can level the playing field,” Elkehag says. “Even if you don’t have this bold personality… the numbers [from crowdfunding campaigns] can help you speak for yourself.”