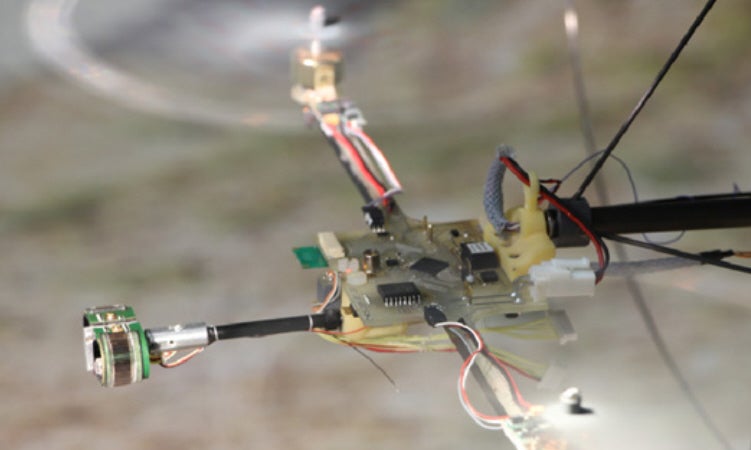 Secretly, a lot of drones are cell phone parts disguised as flying machines. Advances in cellular technology, like miniaturized powerful batteries, cheaper smaller cameras, and sensors like accelerometers have all found their way from our pockets to the skies. Now, a new drone eye wants to shed cell parts like a vestigial tail, and instead make drones fly on sight alone.

Accelerometers are neat tools, and in drones they detect the force of gravity, letting the craft know which way is down. But they’re hardly the only way for flying vehicles to stay level. The BeeRotor drone, made by roboticists Fabien Expert and Franck Ruffier at Aix Marseille University in Marseille, France, manages to fly without one. Instead, the three-ounce rotorcraft uses electronic, almost panoramic eyes that look out at the ground below, and then adjusts the BeeRotor’s speed and altitude accordingly, so it can fly through an experimental tunnel over a simulated rolling landscape without crashing, and then land safely at the end.

Published in Bioinspiration & Biomimetics, the study is an attempt to understand and then mimic how insects are able to fly safely. Because insect bodies are so small, they’re a great model for micro-robots, where all space is at a premium. Tiny rescue robots in the future may not have room for an accelerometer, even a small one, but they’ll almost certainly require a camera. That means machines that can fly from sight alone can use equipment they’ll already have on board. This is a definite win, not just for the robotics engineers, but for any person trapped in a collapsed building that would rather be rescued by a nonliving machine instead of a cyborg beetle.

Watch it below during trials: