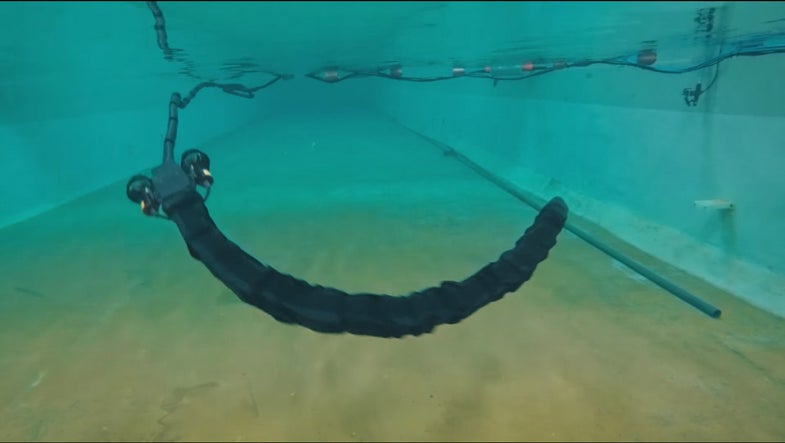 A snake is the shortest animal between two points. At least, that seems to be the thinking behind this aquatic snakebot. Built as a collaboration between Norwegian maritime and defense technology giant Kongsberg, The Norwegian University of Science and Technology, and Norway’s Statoil energy company, the Eelume robot is a tethered undersea snake with jets, made to go where humans simply can’t. Here’s what the untethered concept looked like:

And here it is, as a real robot flopping around inside a swimming tank:

At its head, there’s a light and a grasper, which would allow the robot to turn dials, pull levers, or otherwise manipulate objects under the sea like a disembodied diver’s arm. That makes it especially useful for inspecting and repairing oil rigs, or other underwater structures (like lost Loch Ness Monster props). Snake bodies are great, especially when untethered, at wriggling through difficult spaces, and if the body is successful as an undersea repair tool, we can expect to see the form adopted for other purposes, like mine clearing or shallow water exploration.