This bird-legged quadcopter can easily perch in the treetops

The new design could open up the possibility for more adaptable landing gear. 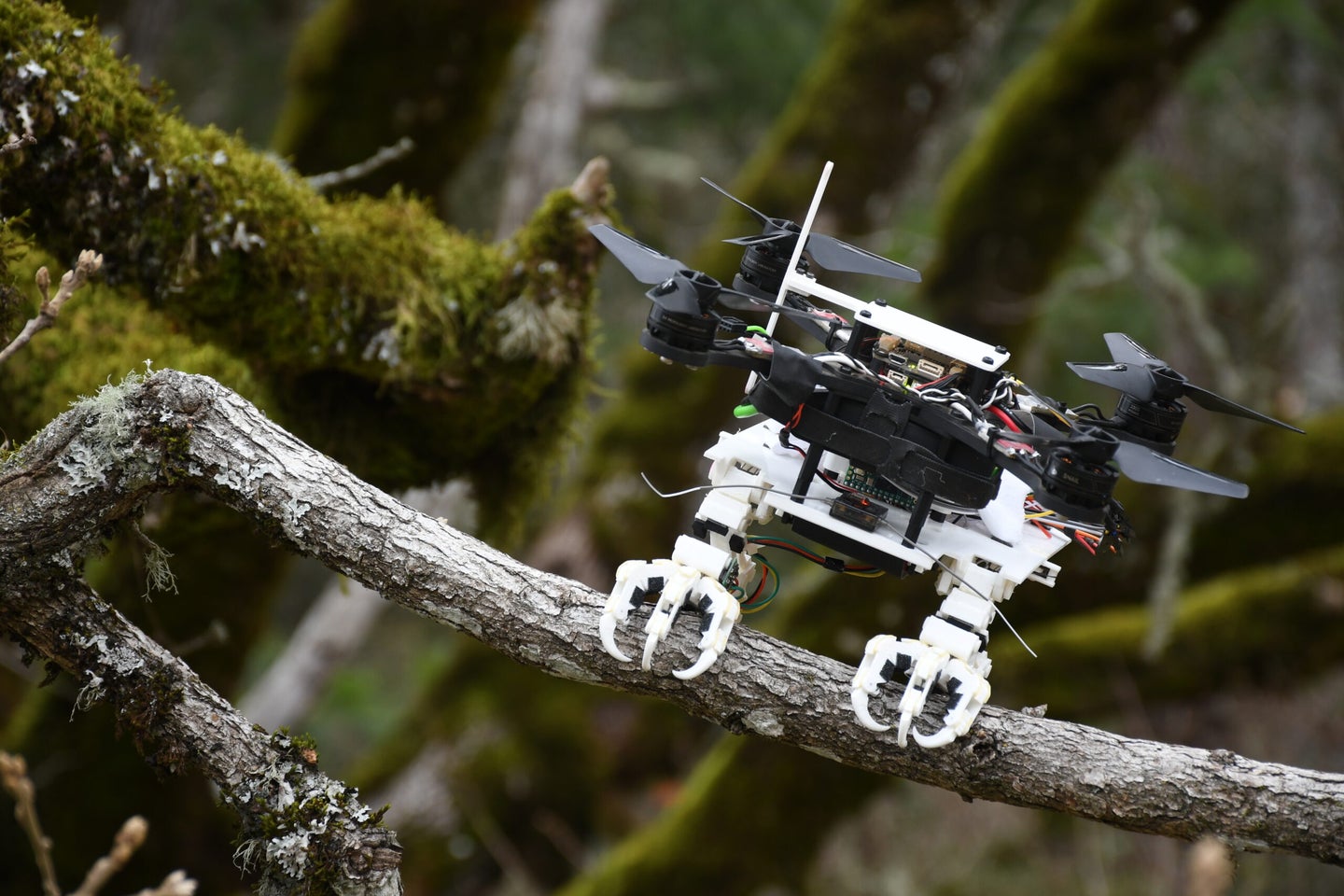 Birds have mastered the art of landing on complex surfaces such as rough, textured tree branches. Now, a new robot developed by Stanford engineers has a useful set of bird-like features such as claws, toe pads, curving feet, and bending legs that allow it to land smoothly anywhere.

The bot, a flying Frankenstein-type contraption, has four sets of propellers on top that fly it, and two legs underneath. The legs look similar to the legs on a bird you might see out the window, but are attached to a quadcopter.

The research, published in Science Robotics on Wednesday, details the development of the bot, which requires minimal computational power from its control board. This allows it to be incorporated in the future in other projects without demanding a lot of computational space, leaving room for other objectives like observation, recording, other movements, and more to be programmed in. The robotic bird-like legs can also be used to model the way avian legs move and function without needing to involve real birds.

“We ended up designing this robot that can land like birds [do],” says David Lentink, a senior research engineer involved in the development, “and the way we got there was by first studying how birds actually accomplish landing on really complex surfaces.”

First, the team needed to create an initial prototype based on previous research in avian morphology. They consulted available texts and bird cadavers, and tried to get as much information as possible without having to use live birds.

Lentink and the team went through many iterations of the robot legs in order to get the grasping effect onto surfaces like tree branches just right.They tested each iteration to see if it could land correctly by using another automated machine that would launch the bird bot at a tree the same way each time. If the legs could not grasp the surface, the robot would fall off the branch, and the team would readjust the features and try again until they got it right.

Early versions of the robot had legs that focused on shock absorption instead of mimicking avian characteristics, but as these versions failed to grasp the branch they were thrown at, the structures on the robot eventually evolved (through the researchers’ work) to become more bird-like. The team changed the design from one leg to two as trials showed that having both helped balance the robot on asymmetrical surfaces. They also swapped the flat rubber pads on the robot foot for a more wavy, rough-surfaced, but still squishy design (rubber proved too slippery to grasp the branches). They replaced engineered hooks with 3D-printed claw-like structures, as the hooks’ sharpness actually hindered performance.

“There’s this whole mechanics of being able to grasp a complex surface of which you have no idea what it looks like,” says Lentink.

Besides features, the team had to get the actual motion of the leg just right. The final feet of the bird bot can bend at two joints, which enables it to grasp a branch by bending at the first joint before the second, like bending your wrist and then fingers to grab something. The legs also bend upon contact with the branch to absorb the shock, which in turn creates tension for the feet and toes to curl around the branch. These features allow the bot to adapt upon contact to whatever surface it interacts with.

“Finally, when we got the balance right as well,” says Lentink, “we could reliably and repeatedly perch on really complex surfaces.”

Despite undergoing 190 trials of being tossed, the bird bot saw little wear to its structural integrity, and continued to grasp the branches. Not only could the bot repeatedly do this, but it did so without much computation from the bot’s controls. Because the legs are adaptable enough to land the robot, there was no need for artificial intelligence. Lentink explained that this leaves room for flight, observation, and other motions to be programmed into the landing features if they were to be added to more complex machines in the future.

The bird-legged bot also opens up possibilities for an adaptable landing gear that can lessen the need for landing strips and helicopter pads. Other small drones can only fly for so long, but with legs like these, this tech opens the door for drones to perch while they observe, reducing their overall power use.

“If we put on our bird goggles,” says Lentink, “and we look at what the world looks like, we can land everywhere.”