Yesterday, a robot made history. The X-47B, an experimental drone that flies itself, landed on the aircraft carrier U.S.S George... 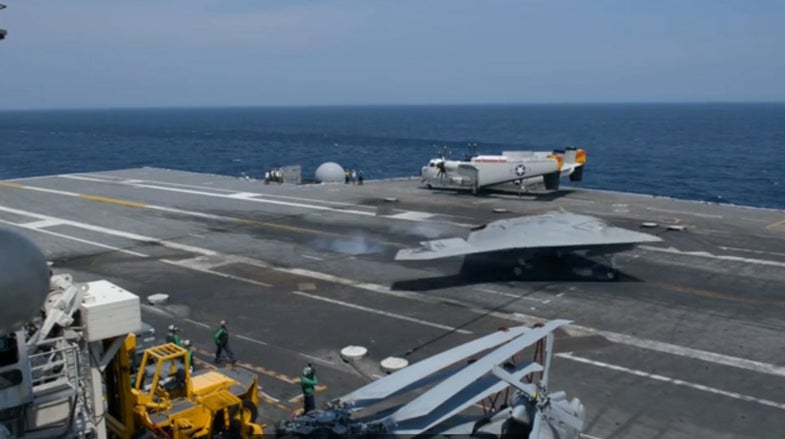 Yesterday, a robot made history. The X-47B, an experimental drone that flies itself, landed on the aircraft carrier U.S.S George H.W. Bush. Why is that a big deal? Because landing on an aircraft carrier is hard. Both the jet and the ship move fast, and a ship is a tiny spot for pilots to aim for compared with the vast expanse of the ocean. Earlier this summer, the X-47B demonstrated that it could perform a touch and go landing (when the plane touches down, then keeps going). In the latest demo, the batwing plane used a hook to catch a cable on the carrier, so forward momentum wouldn’t send it back into the sea, then it stayed put. The demo foreshadows a future of autonomous combat aircraft launched from aircraft carriers.

This is an important step toward smoothing out some of the biggest kinks in military operations today, chief among them communication. A key part of the X-47B demo system are the data links between the drone and the aircraft carrier, which allow the drone to transmit information back to operators on-board the and receive new orders. Improvements based on these data links aren’t limited to drones, but could combine with autonomous surveillance aircraft, robotic fighters, and next-generation manned aircraft to create a naval force that can cover a larger area, all while responding quickly and communicating with the whole of a fleet. It basically gives the next generation naval fleet super-fast reflexes.

We’re at the start of something very, very new. As Popular Science contributor Clay Dillow put it, “this is an iPod moment for naval aviation.”

Read more about the X-47B here, and watch the historic landing below: