"Hello, NSA" is a fun plan to befuddle U.S. spies, but will it work? 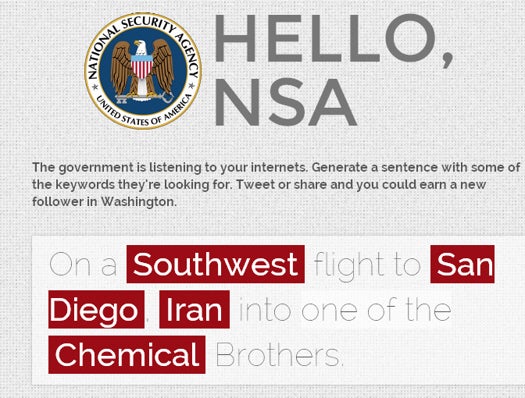 With characteristic subtlety, yesterday Vice launched “Hello, NSA”, a site that generates keyword-laden, tweetable messages designed to overwhelm the National Security Agency with false reports. The fundamental principle behind this (besides extending a middle finger toward government surveillance) is the needle-in-a-haystack problem of intelligence collection.

By the very nature of intelligence issues, there’s much more irrelevant communication than information actually related to potential terrorism. To sort through all this, the Department of Homeland Security has a list of more than 370 keywords used to identify suspicious and potentially terror-related communications. So long as only suspicious communication contains the right combination of these keywords, the metric works.

“Hello, NSA” is designed to gum up the workings of that algorithm. By increasing the amount of metaphorical hay, or irrelevant information, that gets flagged as terror-related, it makes it more difficult for spies and analysts to use information collected through broad surveillance. The phrases generated through VIce’s new program are short enough to fit inside a tweet, append to a Facebook status, or include in an email.

Some of them are reasonable typos, like in the image above. Others messages I got from the generator seem to be deliberately provactive, such as, “More national preparedness please. Let’s ramp up homeland security lest we be overrun by Basque separatists.” Another fun one: “Q: Who’d win in a gunfight? The Taliban, FARC, Hezbollah, or Hamas? The catch: No suicide bombers.”

Clever though the plan may be, it’s unlikely this will actually cause any real problems for national intelligence services. The Homeland Security keyword list has been publicly available for more than a year, and it’s likely been changed and modified since publication. Instead of actually interfering with NSA functioning, “Hello, NSA” seems more like agitprop, an artistic movement involving highly politicized statements, literature, and performances.

Below is my favorite riff on the NSA, a ringtone released by They Might Be Giants, designed to remind everyone about who could be listening in.