Meanwhile, China edges into the top five, and the Department of Energy plans a thousandfold speed increase by 2018 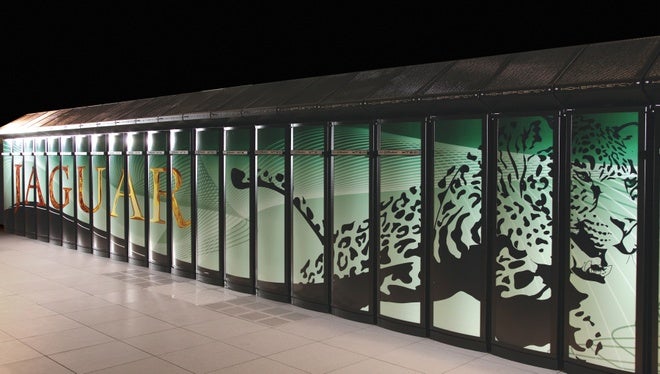 A supercomputer known as Jaguar has finally bested IBM’s Roadrunner supercomputer in the biannual TOP500 list, but researchers have already begun looking into exascale supercomputers that consist of 100 million cores and run 1,000 times faster than Jaguar. Computerworld reports that the U.S. Department of Energy has begun holding workshops on the new supercomputers to run high-res climate models, develop smart grids and aid fusion energy design.

The current supercomputer race measures success in one quadrillion calculations per second, or one petaflop. Roadrunner has dominated the list since it became the world’s first petaflop supercomputer in 2008, and has tackled everything from dark matter to HIV family tree modeling at the same time. But a repartitioning of the system dropped is performance from 1.105 petaflops per second to just 1.04 petaflop/s, and allowed the Cray XT5 supercomputer at the Department of Energy’s Oak Ridge laboratory to seize the lead with a performance of 1..75 petaflop/s.

China’s new Tianhe-1 supercomputer, whose name translates as “River in the Sky,” rounded up the top-five list. The Chinese supercomputer at the National Super Computer Center in Tianjin, China currently tackles issues such as oil exploration and simulating aircraft designs. Several companies may also count themselves winners in this supercomputer race. IBM and Hewlett-Packard claimed 186 and 210 systems of the top 500, and Intel processors power 402 of the 500 systems.

As for national geek pride, the U.S. maintains a healthy lead, with 277 out of the 500 systems. The UK leads Europe in this category, with Germany and France tied for second. China also holds dominance over the Asian share, followed by Japan and India.