Playing fetch with BigDog just got a whole lot more fun. And destructive. 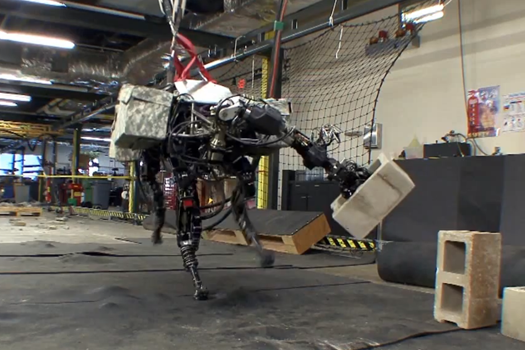 We’ve described Boston Dynamics’ military-funded BigDog robot as a lot of non-canine things over the years. “The offspring of a bull and a spider,” a “robot sherpa” and a “robot pack mule,” for example.

The latest trick in the rough-terrain robot’s bag is decidedly more dog-like: It’s learned to play fetch. Except when you play fetch with BigDog, it’s the one throwing. Large cinderblocks, to be precise.

Using a robotic arm where its head would be (making it look even more mule-like), it has added moving around heavy objects to its repertoire — in addition to obeying voice commands, keeping its balance on slippery ice, traversing slippery and uneven terrain and carrying 340-pound loads. Like an actual animal, it uses the strength of its legs and torso to help power its motion (and trots around like a nervous warhorse). “This sort of dynamic, whole-body approach is routinely used by human athletes and animals, and will enhance the performance of advanced robots,” according to Boston Dynamics.

If you skip to about :25, you can see it happen in dramatic black-and-white slow-mo, which, to be frank, is the ideal way to view army technology in action.