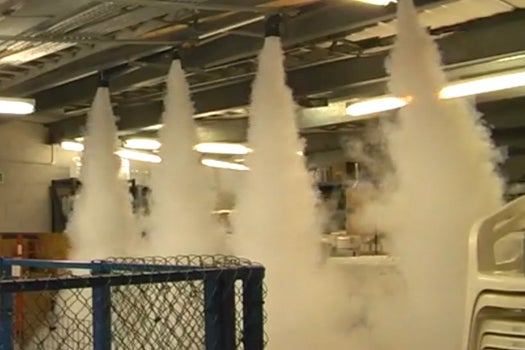 While the debate over how to stop gun violence rages on, some business are trying to step up and take gun safety into their own hands, marketing bulletproof backpacks and calling for 3-D printed safety designs.

A British company called Concept Smoke Screen is now offering up its Security Smoke Screen as a solution to gun violence in schools. Push a button, and thick, non-toxic smoke fills the room, obscuring potential victims from a shooter’s gaze. The product was developed to protect bank vaults, and has been used for more than 30 years, but this is the first suggestion that we install it in classrooms.

Concept Smoke Screen suggests that the smoke not only would protect teachers and children by hiding them from view, but would also alarm a shooter and possibly even draw authority attention to the school’s situation. It doesn’t take into account a situation in which a mass shooter on a rampage might just spray bullets blindly into a classroom, or what would happen if the shooter was already familiar with the school and the technology. But it would at least make the situation more difficult for them.