The first instrument ever built specifically to help astronomers study the effects of dark energy is now ready to document the history of the cosmos. 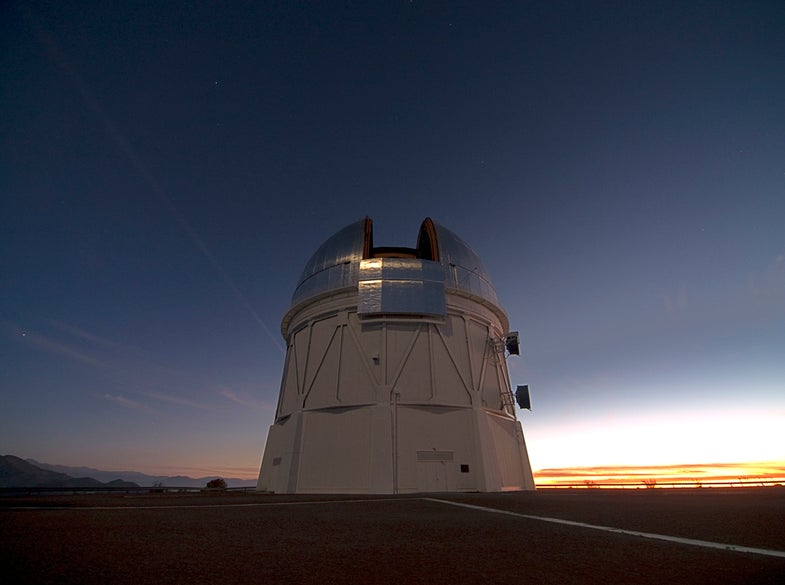 For something that we know absolutely nothing about, dark energy owns a prominent place in astrophysics. Its discovery won the Nobel Prize even though the very term “dark energy” is a placeholder for a phenomenon we don’t really understand, and though its effects are observable dark energy itself–which supposedly makes up three-quarters of the universe–has never been seen and remains unobservable. That’s why the Dark Energy Camera–which achieved first light just last week–is such a big deal. With it, we might finally give the term “dark energy” some meaning.

The Dark Energy Camera (DECam) was eight years in the making. Constructed at the Fermilab National Accelerator Laboratory in Illinois and installed on the Victor M. Blanco telescope at the National Science Foundation’s Cerro Tololo Inter-American Observatory (CTIO) in Chile, it is a specially-designed sky surveying instrument that can do some very specific things better than any instrument in the world. It is not the world’s most powerful optical telescope, nor is it the world’s highest-resolution camera or the largest instrument of its kind.

“We call this dark energy. That’s really just a stand-in for saying we don’t understand what’s going on.”But for what it was designed for–for measuring the effects of immeasurable, invisible dark energy on the universe over billions of years–it is absolutely unmatched. That’s why the Dark Energy Camera is important and why it has the potential to reshape the prevailing way we think about the cosmos. Over five years it will survey one-eighth of the total sky, imaging more than 300 million galaxies, 100,000 galaxy clusters, and 4,000 supernovae, some of them as far as eight billion light years away (which means it’s essentially looking eight billion years into the past). Following are five reasons the Dark Energy Camera is one of the most interesting astronomy instruments working today:

Back in the late 1990s, some astronomers discovered something rather unexpected. We’d known for decades that the universe is expanding, a fact discovered by Edwin Hubble and one that caused Albert Einstein to scrap large parts of his theoretical work (he called his failure to predict an expanding universe his life’s greatest blunder). But for all those decades we thought the universe was expanding at a steady rate. It wasn’t until 1998 that observations of the universe (particularly of faraway supernovae) revealed that the universe’s expansion is actually accelerating.

The term “dark energy” was coined to describe the force driving this expansion, a force that more or less competes with gravity, pushing things apart rather than bringing them together. But, like gravity, we don’t have a very good grasp on how this works. “We call this dark energy,” says Dr. Joshua Frieman, a professor in the University of Chicago’s Department of Astronomy and Astrophysics and a theoretical physicist at Fermilab. “That’s really just a stand-in for saying we don’t understand what’s going on.”

Frieman is also the director of the Dark Energy Survey (DES), the international collaboration behind the Dark Energy Camera. Since the discovery of dark energy 14 years ago, there hasn’t really been a dedicated dark energy science instrument. Astronomers have used data and observations from various telescopes to conduct research on the nature of dark energy, but they have never had the specific tool that they need.

“What the Dark Energy Survey is designed to do is to make a map of about 300 million galaxies,” Frieman says. “Then in a separate survey we will make a kind of cosmic movie–we’ll go back to the same part of the sky every few nights and measure about 4,000 supernovae. And by making such a large map and measuring these supernovae, we plan to probe the properties of dark energy with much greater precision than we’ve been able to do with previous surveys and previous data.” 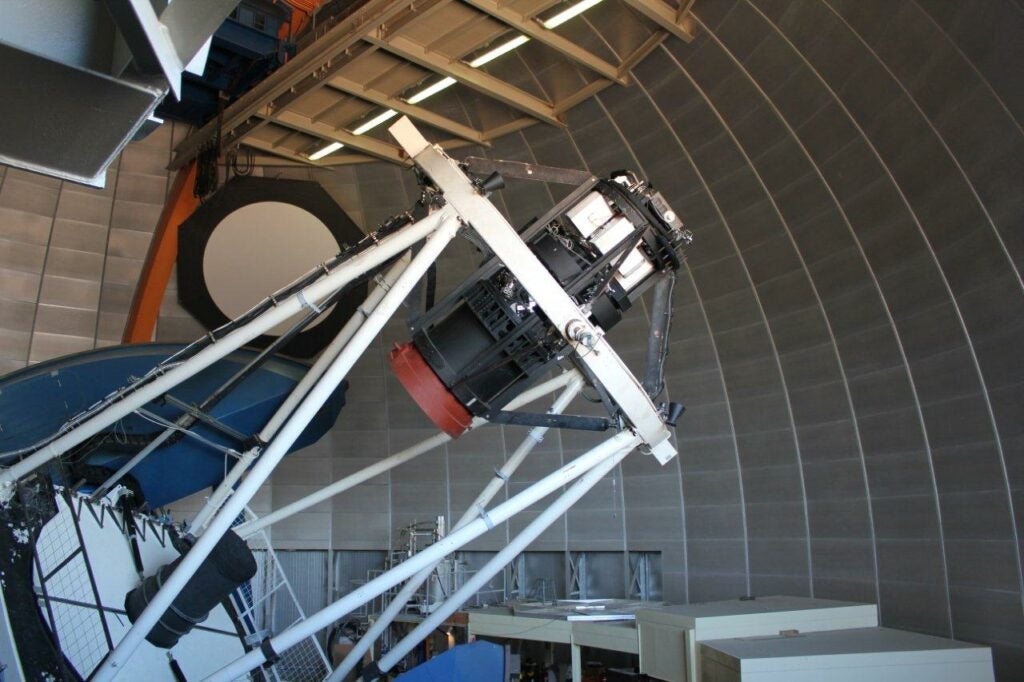 The Dark Energy Camera, Installed on the Blanco Telescope

BECAUSE IT’S AN ABSOLUTELY MASSIVE CAMERA

In order to generate a survey of this magnitude and resolution, you need a really, really sensitive camera with a very wide field of view. Most deep-space gazing instruments have comparatively narrow fields of view, but the DECam can see an area of the sky about 3 square degrees at a time, Frieman says, enough to fit the full moon into its field of view several times over. This will allow the DECam to survey one-eighth of the total sky in the aggregate 522 days it will be imaging for the Dark Matter Survey (that’s 522 days across five years–the DES won’t survey every single day).

In order to collect all the light streaming in from thousands and millions and billions of light years away, the DECam also contains a massive sensor array with a 570-megapixel resolution. In conjunction with the four-meter Blanco telescope on which it’s mounted, the DECam and its 570 million pixel sensor and various lenses create the perfect suite of technologies for imaging vast swaths of the night sky and peering far, far back in time.

BECAUSE IT’S AN ASTRONOMICAL TIME MACHINE

That 570-megapixel array isn’t just good at taking super-high-resolution snapshots of the present, but for capturing light streaming in from deep, deep in the universe. This light has been traveling through space for billions of years in some cases (and thus from billions of light years away), so the oldest light it can resolve actually generates a picture of the universe when it was roughly half as old as it is today.

This sensor array is made up of 62 charge-coupled devices (CCDs), which convert the light that hits them into digital signals for imaging. Most CCDs in astronomy cameras are comparatively thin, and while these are great for capturing light in the blue part of the spectrum, they are less efficient at capturing red light. That’s a problem. 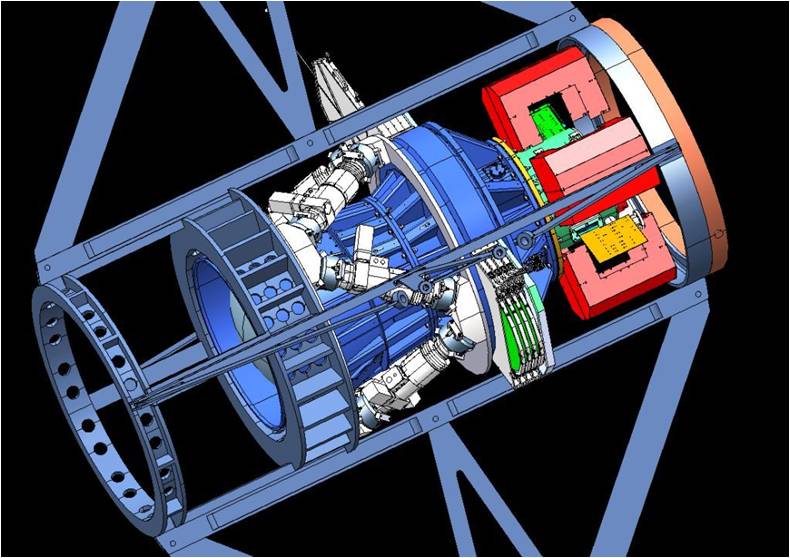 An Artist’s Rendering of the Dark Energy Camera

The DECam’s CCDs were custom built to be thicker than those in the average astronomical camera, making them more sensitive to this red-shifted light. That allows the DECam to see galaxies far deeper in the past, which is critical for piecing together a thorough history of the universe’s expansion–which is exactly what the DES is trying to do.

BECAUSE EVEN THOUGH IT CAN’T ACTUALLY SEE DARK MATTER, IT WILL CREATE THE BEST PICTURE OF IT WE’VE EVER SEEN

Since they can’t measure dark energy directly, astronomers have to measure its effects on the things that they can see–the ordinary matter in the universe, like galaxies and galaxy clusters. The DES will provide them with a map that allows them to see, in one place, the history of cosmic expansion going back roughly 8 billion years. They’ll be able to see how fast the universe is expanding now versus how fast it was expanding at other points in cosmic history.

It will also allow them to see the history of the way things formed in the universe over time, how the early, relatively smooth universe began to clump into galaxies and galaxy clusters, and eventually into the universe we have today. “This process of matter collapsing in on itself is determined by this competition between gravity and dark energy,” Frieman says. “In the early universe we think gravity was the dominant force, that the universe was slowing down, and galaxies were forming. But in the last few billion years we think dark energy has taken over from gravity, sped up the cosmic expansion, and slowed down the formation of new galaxies.”

A sky survey that, in unprecedented detail, shows both the history of cosmic expansion and the history of how the universe structured itself over time will give astronomers new insight into the nature of dark matter and its properties. They still won’t be able to see it directly, but by measuring its effects over time they’ll have a really detailed picture of it that presently doesn’t exist.

BECAUSE IT MAY JUST HELP US FINALLY UNDERSTAND EINSTEIN’S COSMOLOGICAL CONSTANT. OR EVEN BETTER, IT MIGHT NOT

“We’ve done surveys before, but what’s been achievable has been limited.” Frieman says. “This instrument will really allow us to make a substantial leap forward beyond what’s been possible with the instruments available so far.”

What kinds of leaps? Well, for one, it might solve the lingering question of whether or not dark energy is the cosmological constant dreamed up by Einstein as a means to square his theory of general relativity with his notion of a stationary, static universe. Einstein abandoned the cosmological constant (and his static universe theory) when Hubble discovered that the universe is in fact expanding, but the idea of this small, positive value in the mathematics of cosmology has persisted.

Many physicists think dark energy is the cosmological constant, Frieman says, and that could be the case. And if it is, the Dark Energy Survey could confirm it to be so, putting much speculation and debate to rest (and also vindicating Einstein somewhat; he may not have predicted an expanding universe, but one could argue he predicted dark matter long before its effects were observed).

“But what would be even more exciting would be to find evidence that it’s not the cosmological constant, that there’s something else, some new form of energy that we haven’t yet really grappled with,” Frieman says. “In my mind, that would be the ideal result.”